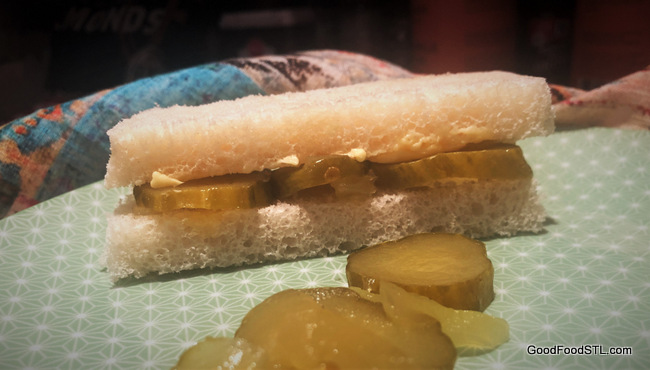 My mother made bread and butter pickles every summer—jars and jars. I loved ’em. They were so crisp and tangy and spruced up many a sandwich.

It wasn’t until years after I was married, that I attempted pickle making on my own. A college professor in my church made what he called a 30-day pickle. Even now, it’s the best I’ve ever had.

Pack No Pickle Before Its Time

In my prime as a housewife, I figured if my friend could make this recipe, so could I. So I assembled all the ingredients: alum, pickling spice, and vinegar, as well as a large crock. The process called for periodic draining and additions of fresh water.

What a pain to go to the basement at a scheduled time for 30 days to tend the cucumbers until they decided to pickle. It was like caring for a new puppy.

I only made my friend’s pickles once. I even lost the recipe, perhaps intentionally, so I’d never be tempted to take on 30-day pickles again. 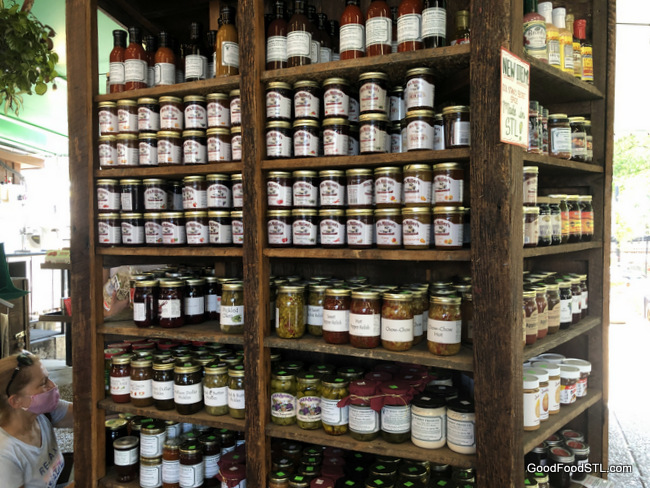 The vast assortment of condiments at the Kirkwood Farmers’ Market.

As I viewed the Kirkwood pickle collection, I was overcome with nostalgia. I quickly added a jar of the bread and butter to my cart.

Since then, I’ve added them to sandwiches like I did as a kid. (At the time, I also put them atop my mashed potatoes, a dining faux pau my mother frowned upon.)

The Birth of Bread and Butter Pickles

While looking at the label on my jar of newly purchased pickles, I wondered how they got their name. When I asked Siri, she had several answers. Take your pick of these pickle stories.

Some pickle purists put slices betwixt buttered bread. Since I’d never eaten pickles exclusively on a sandwich, I made one. I buttered white bread and added a forkful of my Kirkwood bread and butter pickles. I cut the bread to look like a finger sandwich. It was tasty, but, to tell the truth, I prefer my pickles on a BLT or burger rather than as a stand alone sandwich.

One I Didn’t Try 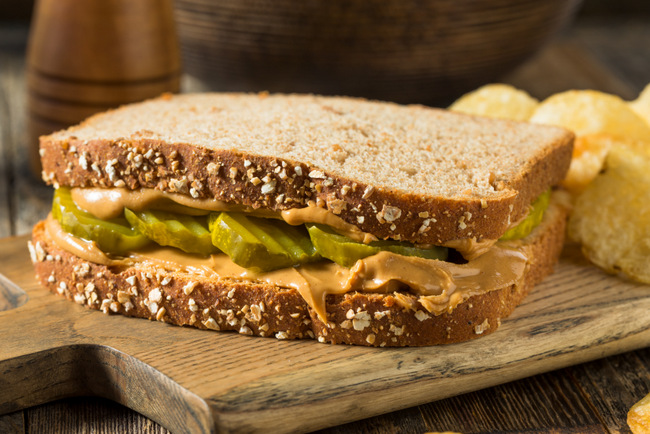 Peanut butter sandwich with bread and butter pickles. Hmm. . . I don’t know about this one. Elvis left the pickles off his favorite sandwich and went with bananas and peanut butter instead.