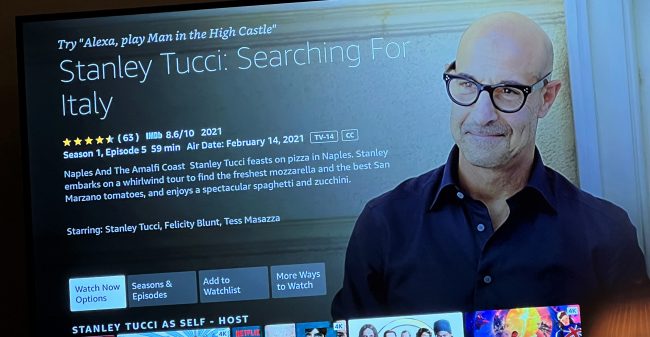 The Rigors of Self-Improvement

My kids are always suggesting some “self-improvement” activity for me. I don’t know why they can’t leave well enough alone. My son, Tom, recently suggested I enroll in Duolingo to learn French along with him and his family. I pampered him and signed up.

Then my daughter, Robin, said I should go back to the gym, exercising there regularly as I did before the COVID era. I’ve resisted this one, but promised her I’d reconsider.

Traveling and Tasting with Tucci

Just this week, son Russ, advocated for a TV series—Stanley Tucci: Searching for Italy. It’s a travel/food show, he said. This seemed like the most entertaining and less vigorous of all my family-suggested improvements, so I began the first of the 20 episodes.

I fell in love with the show! You might say it was a recommendation I could “get my teeth into.” I started with the Sicily segment and can hardly wait to follow up on the other Italian food regions. Stanley, an actor and film maker, is a low key, no nonsense kind of guy. He goes about his travels, tastings, and interviews like he’s doing a scientific study. I find his manner appealing and informative. Not at all like Guy Fieri, the goofy foodster of Diner, Drive Ins and Dives.

Stanley Tucci: “The Best Thing I Ever Ate!”

Russ also brought me a bowl of Stanley’s pesto pasta, that he and Deb made and greatly enjoyed. Then I found another Tucci recipe that I want them to try. It’s a zucchini based pasta called spaghetti alla Nerano. The recipe drew rave review from commenters on line. What’s more, Stanley called it “life-changing” . . .  “unbelievable,” “the best thing I ever ate!”

That got my attention. It’s next on my list to serve at the farm. I’ll report back.

Do You Have the Stomach for The Menu?

Another attempt to feed by culinary wanderlust, came from my doctor, who knows I’m a food blogger.

“Have you seen The Menu?” he asked.

When I looked perplexed, he said “You must see it!” Later, Russ said the same thing. My grandson, Andrew, agreed. All noted that the HBO film was a bit weird, yet required viewing for a food blogger or restaurants critic.

Another friend had seen the movie two and a half times. (He could only handle half of it the first time.) To ready me for the experience, Russ advised that I think of it as satire, which I did.

Now I’m convinced that the world is divided into two groups of people—those who’ve seen the film and those who couldn’t make it to the end. Even so I’ll never see a chef in quite the same way again.

After a Week of “You Shoulds”

I’m glad so many family and friends are interested in my well-being, but it’s hard to keep up with all the good things they proposed for me to do recently. Hmm . . . I’m thinking it’s my turn to repay their favors with some of my suggestion for them. This should be fun. 🤗 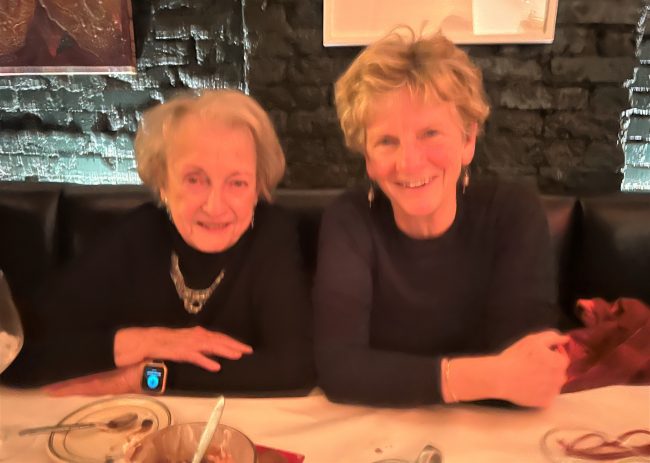 Stop whatever you’re doing! Pick up your phone (or go to Resy.com) and make a reservation to dine at the newly-opened Wright’s Tavern. The “neighborhood steak house,” as owner Matt McGuire labels it. (Matt also owns Louie in DeMun.)

Wright’s Tavern is the fourth of the upscale restaurants at Wydown and S. Haney (Akar, Bistro La Floraison, and Bar Moro—reservations at Tock.com).

Put “Botera Plaza” on Your Map

You can recognize the Clayton intersection by the whimsical statue, the work of Colombian artist Fernando Botero, that accentuates the grassy median. I call the statue “Chubby Man on Chubby Horse Awaiting Traffic Light.” 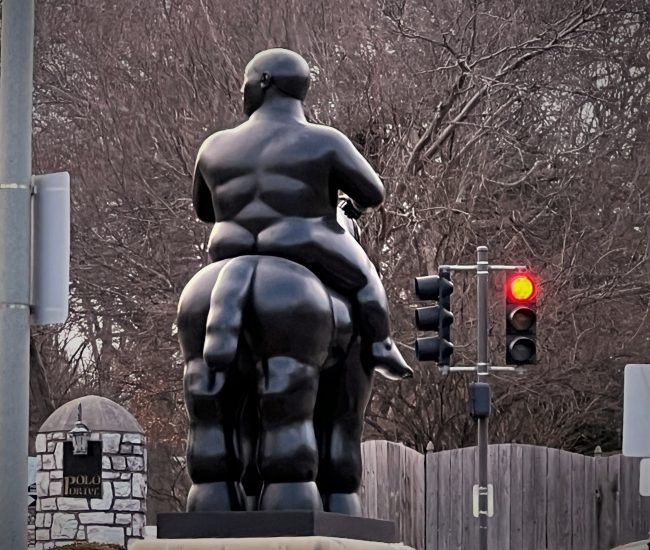 We lucked out and got a table at Wright’s Tavern at 5:30 last Saturday. It was a little earlier than I preferred, but I felt fortunate to get in at the last minute.

The refurbished space seemed a bit larger than it did in its previous incarnation as I Fratellini. I suspect it’s the open kitchen, table arrangement, and lighting that made for a more spacious feel.

The new name, Wright’s Tavern, honors the architect Henry Wright, who designed some of the local neighborhoods as well as the World’s Fair Pavilion in Forest Park. 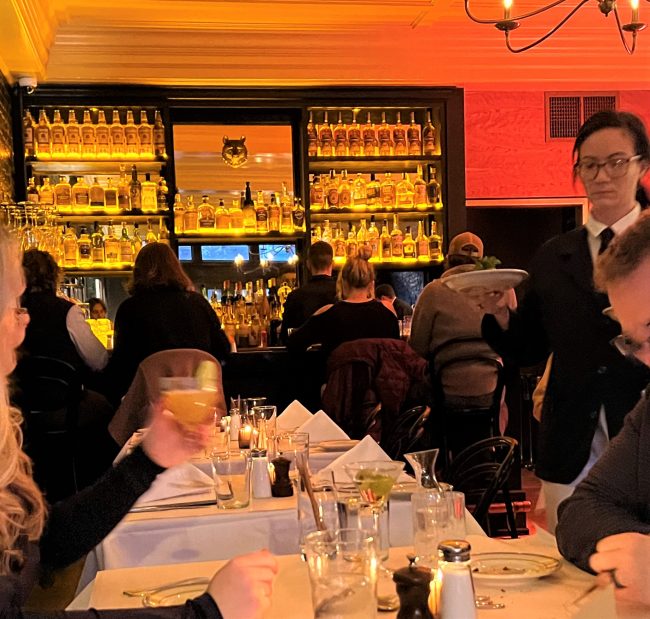 The 36-seat restaurant and 4-seat bar might be called diminutive. But nowadays we refer to such space as cozy and sociable. And that it is.

In addition to a hearty welcome, the first thing you notice is the well-choreographed wait staff that moves smoothly about the tables delivering the culinary artistry of Chef Cary McDowell.

Hail Caesar! The Caesar Salad, That Is 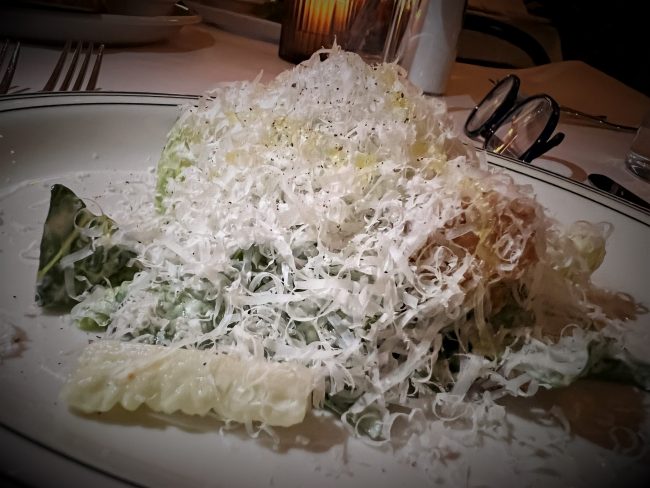 A Handsome Plate of Halibut 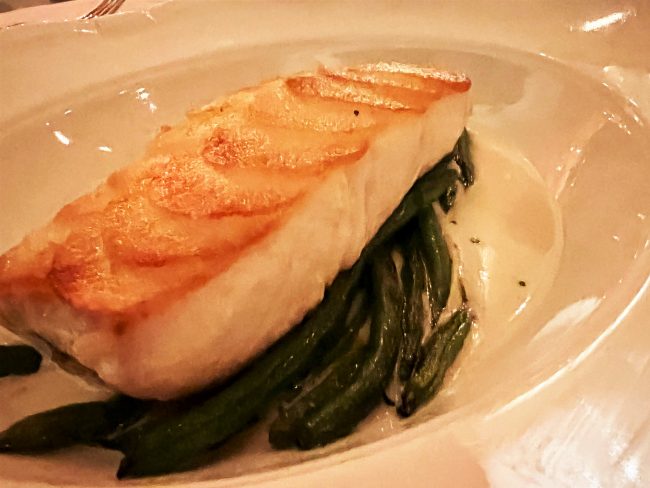 The plates that passed our table were inspirational. I wanted to try them all. But I finally, settled on the crab cake.

Robin chose the sliced potato-encrusted halibut on a bed of perfectly cooked green beans. You can always count on JC to test the steak offering. In this instance, the sirloin.

The Crabbiest Crab Cakes Around 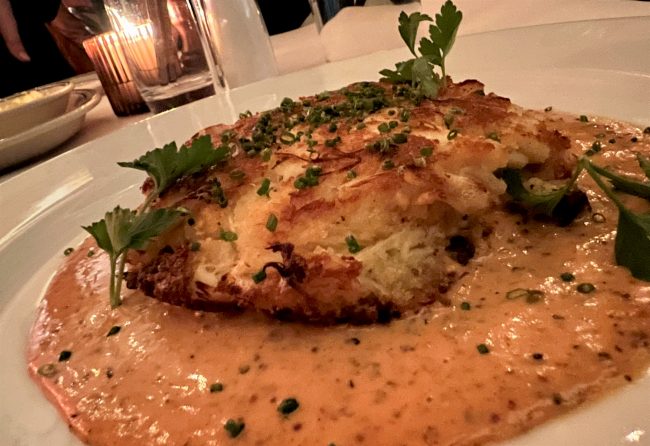 As to my Blue crab cake. It was well seasoned and, unlike many Midwestern crab cakes, it was heavy on lump crab rather than filler. I would have preferred the remoulade sauce puddled beneath it to have been served as a side to add as desired. I want my crab cake to be naked.

I learned this from the award-winning owner of Faidley’s crab cakes in Baltimore. He said, “Keep it simple when it comes to seasonings and sauces. Let the crab shine through.” Next time, I’ll ask for the sauce on the side. 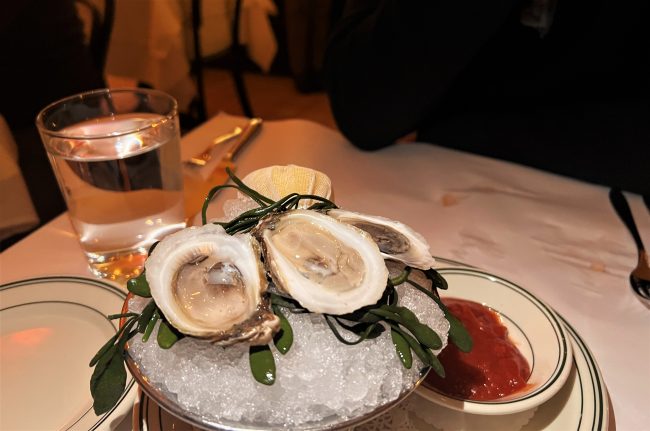 There are several potato side dishes on the menu: pomme frites, potatoes Dauphinoise, and potatoes puree. I could eat potatoes everyday, so I found this a welcome item. We shared the Dauphinoise version and it was excellent. I also nibbled a few of JC’s fries. Thumbs up! 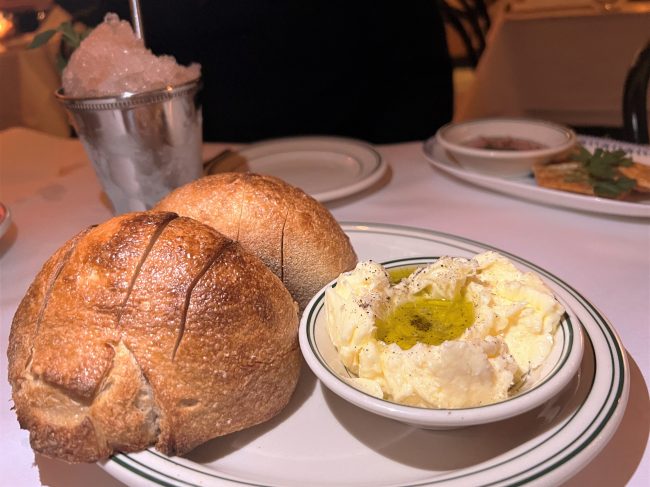 I don’t often bother to mention the free bread offering at a restaurant. But the tavern serves some of the best sourdough bread I’ve ever had. It came with a small bowl of spreadable butter with a drizzle of oil in the middle. Perfect matching. 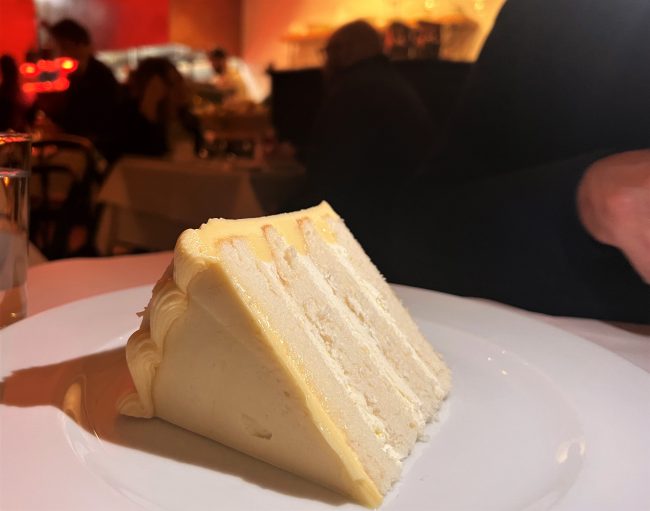 I’d heard so many good things about the desserts, we had to give them a try—though the entrée portions were unusually ample.

I tasted JC’s selection, the so-called Wedding Cake. It looked like the classic dessert, but far out-shown anything I’ve ever had at a wedding reception. 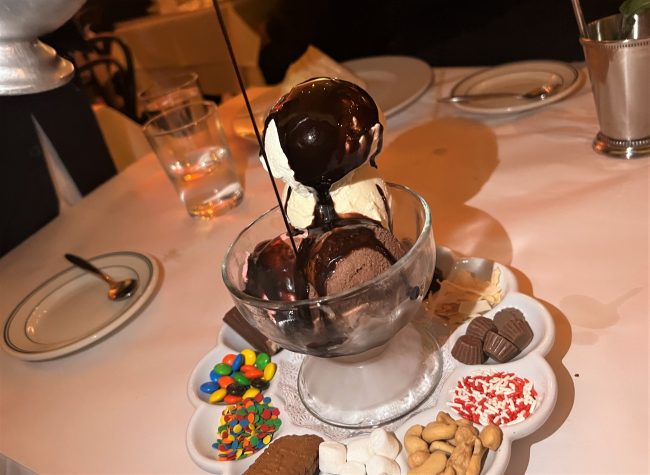 Playing with Your Food

Robin and I were feeling a bit playful, so we shared the humongous Ice Cream Sundae surrounded with tiny condiments, that brought out your inner child. (I didn’t know that Reese’s chocolate/peanut butter cups and M&Ms came in such a petite size.)

We dressed the ice cream with a few of the many offerings—though there was some disagreement as to just which of the tiny condiments should be added—and how many. 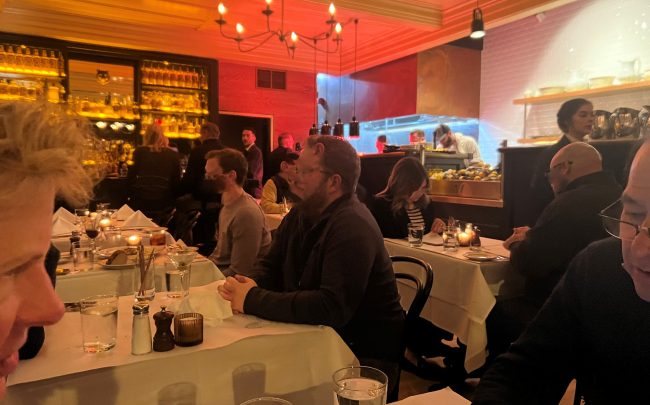 All in all, it was a charming evening and a delightfully delicious meal. 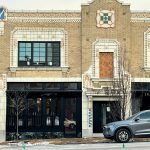