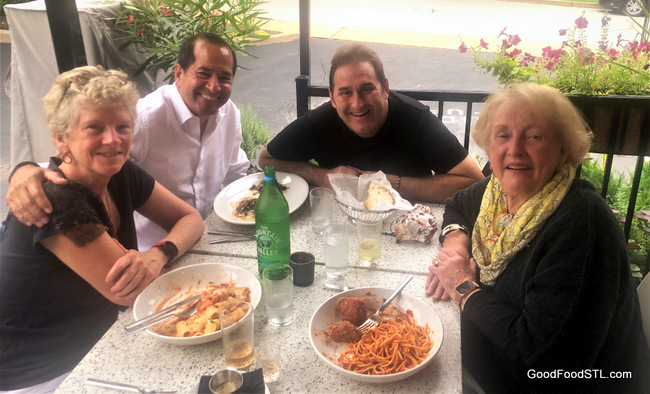 Peno restaurant owner Pepe Kehm joins the table for a visit over dinner. Pepe’s mother is from Calabria in Southern Italy and his father from France. Now that’s the best of culinary worlds. Pepe has worked in restaurants since he was 12-years old, including his mother trattoria.

Just a Couple Blocks from the Botera Horse 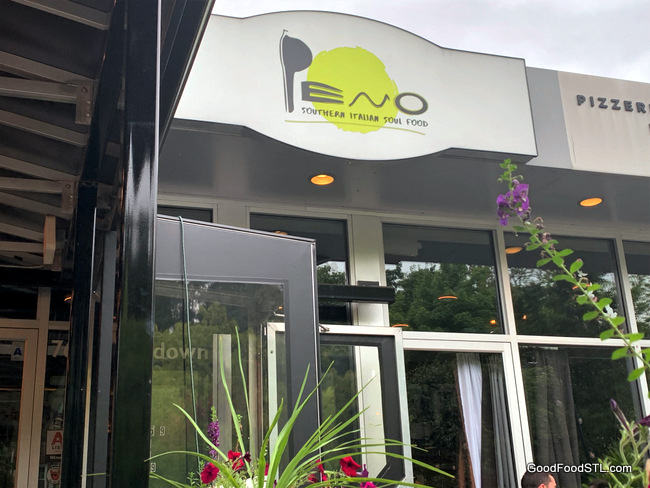 The sign above the door promises (and delivers on) “Southern Italian soul food.”

The Italian restaurant is getting culinary kudos both from reviewers and diners. I wanted to see what all the buzz was about. So a while back, I said to my daughter, “Let’s go to Peno this weekend.”

“How do you spell that?” she asked.

I responded defensively. “No matter. From now on you’ll think of the drink and remember the restaurant name.”

She sighed. “Whatever,” she replied. “I’ll let you know if I get a reservation.” 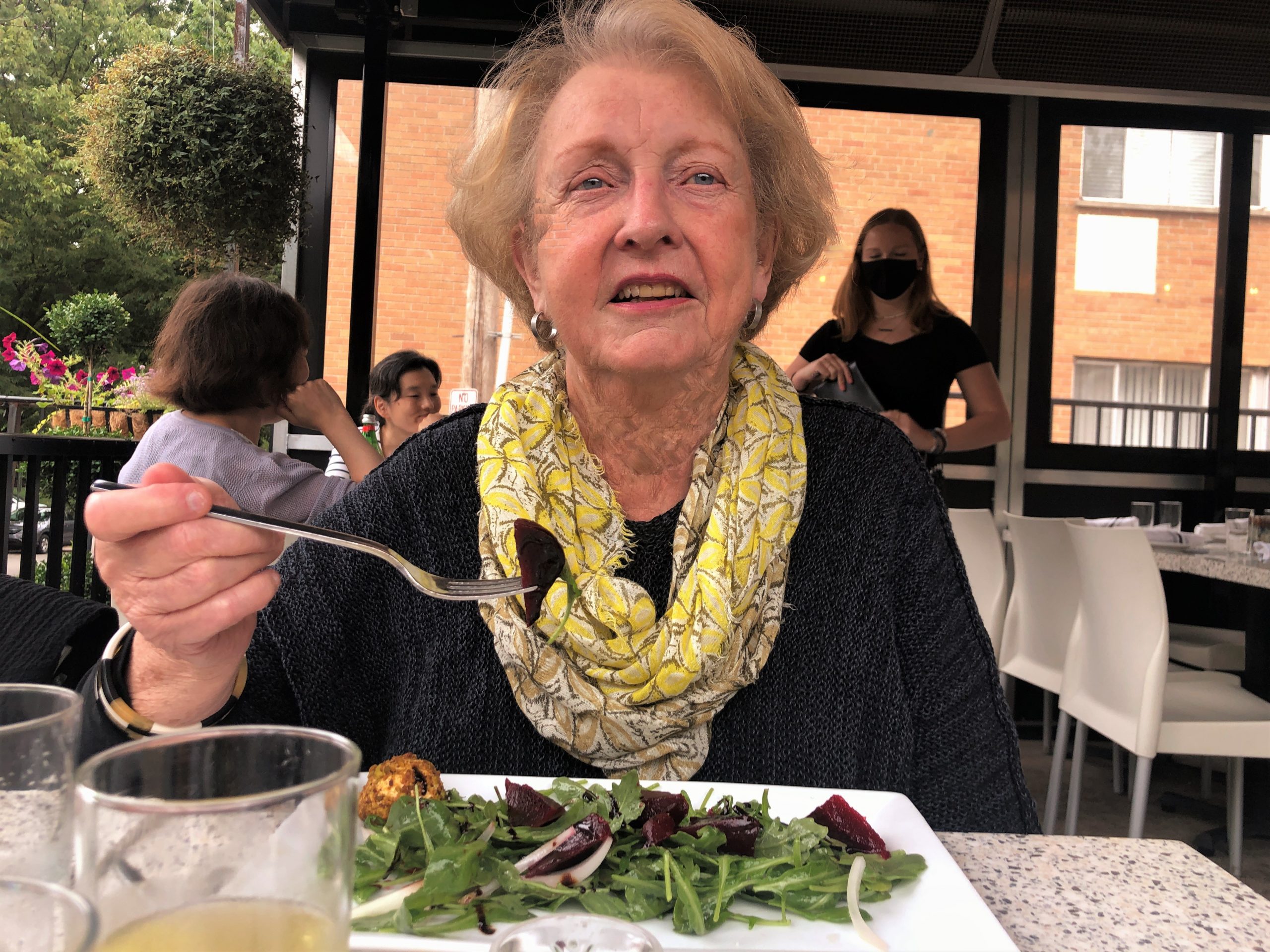 It was a beautiful day in the neighborhood and the perfect time to enjoy a feast of Italian goodness on Peno’s comfy, flower-studded patio.

Southern Italian in the Heart of Clayton

There’s now a half dozen, or more, good Italian restaurants in the Clayton area besides several pizza joints. At the rate we’re going, Clayton may compete with The Hill for Italian, down home, country-style cooking.

This is not your average Pizza Hut offering. There’s a wow factor here. To test my first impression, I later ordered several of the pies for a family gathering. Good choice. 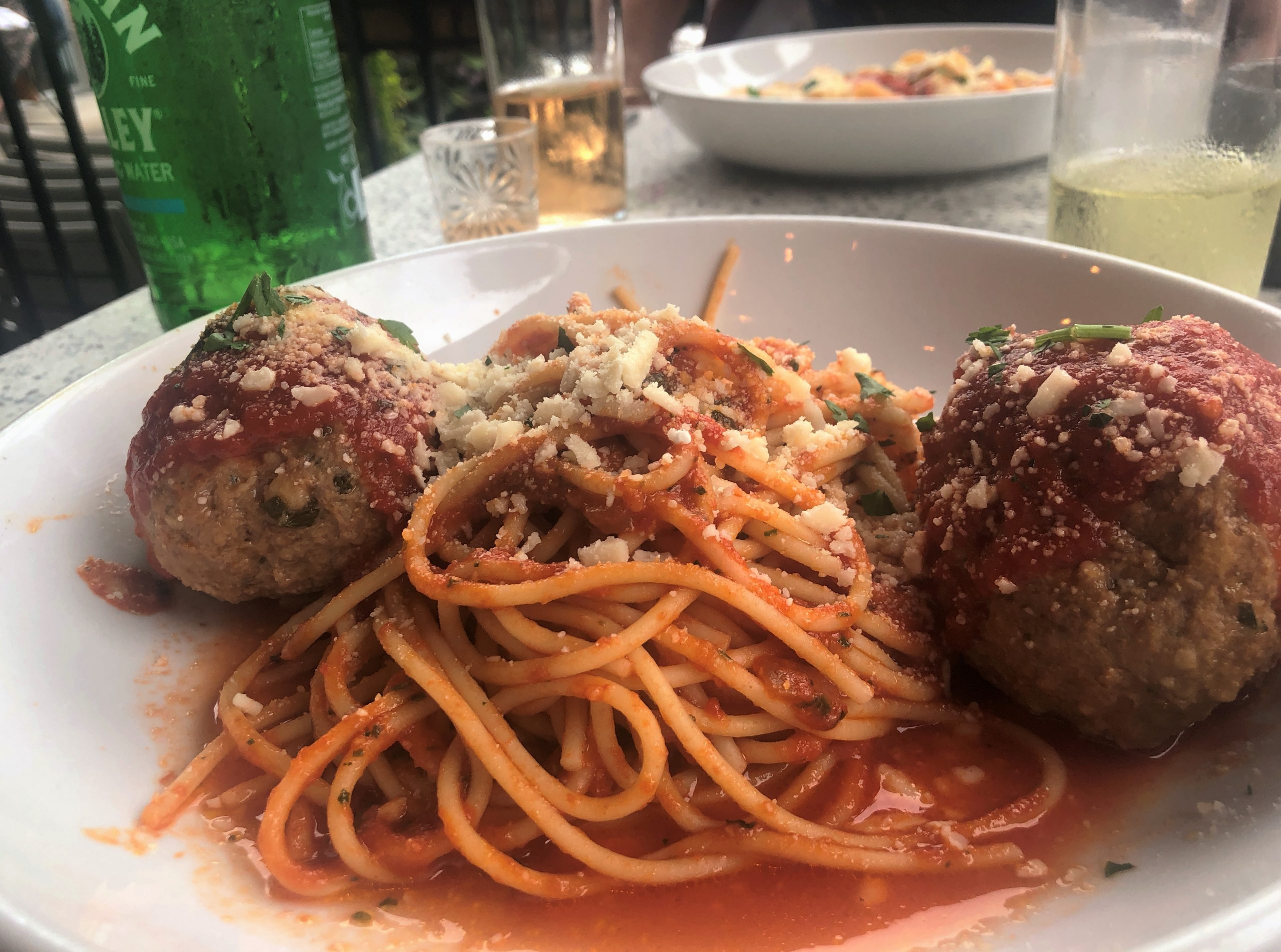 “You get no bread with one meatball,” or so goes the old 50s tune. But Peno’s spaghetti comes with two meatballs, each nearly the size of a tennis ball! And you get bread. 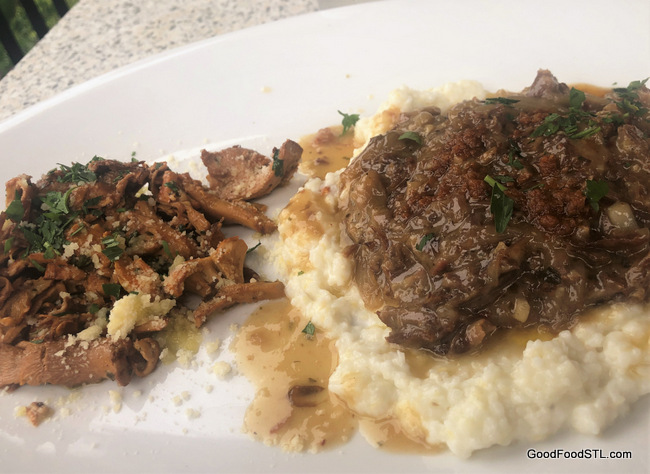 Goat served over creamy polenta with a side of chanterelle mushrooms. (You don’t see that on every menu.) Delish. 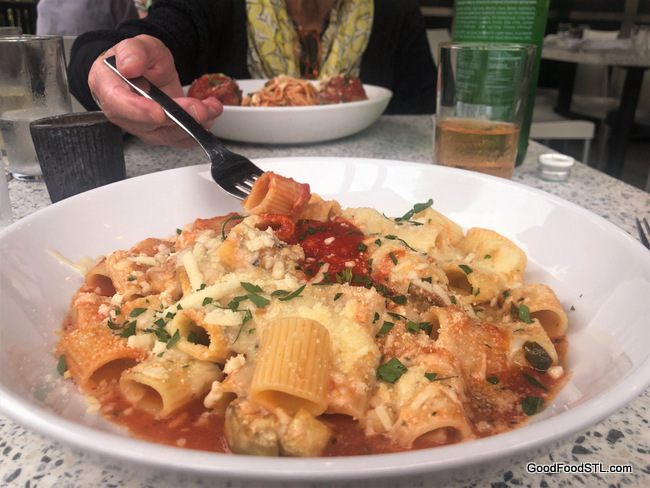 I fell in love with Pasta alla Norma while traveling in Sicily. The roasted eggplant highlights the pasta dish, that includes a spicy tomato sauce and smoked mozzarella. I couldn’t resist reaching across the table to sample Robin’s order. 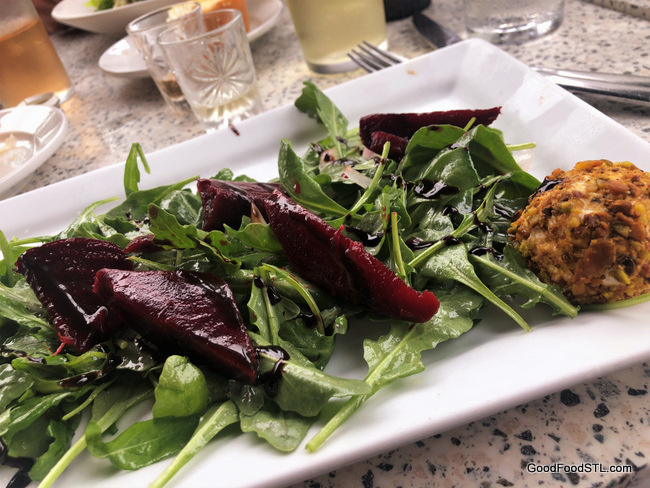 These tarragon marinated beets rest on a bed of arugula along side an encrusted goat cheese truffle finished in a balsamic reduction. 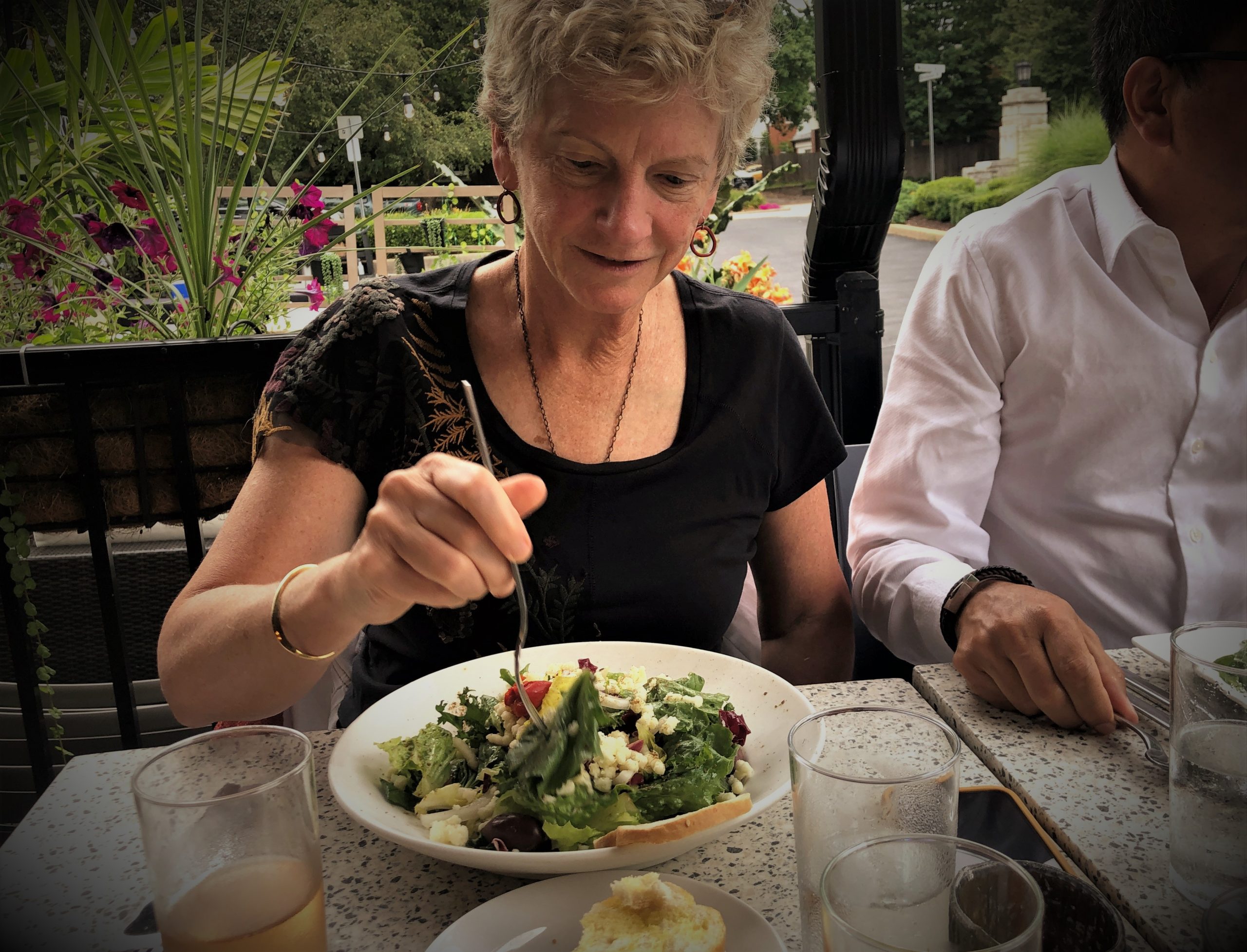 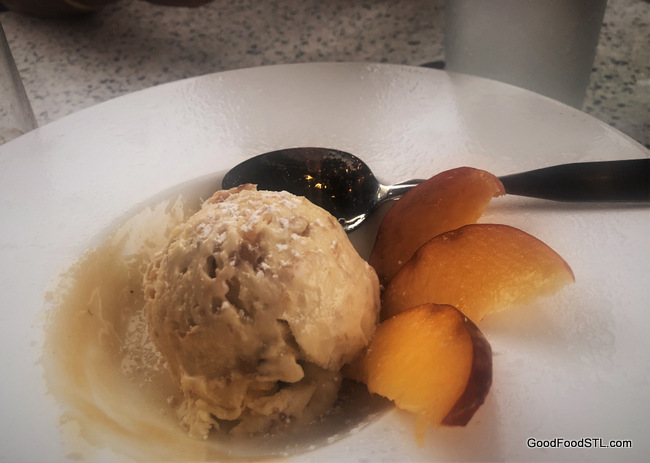 The Peach Gelato is blow-your-hat-off good! 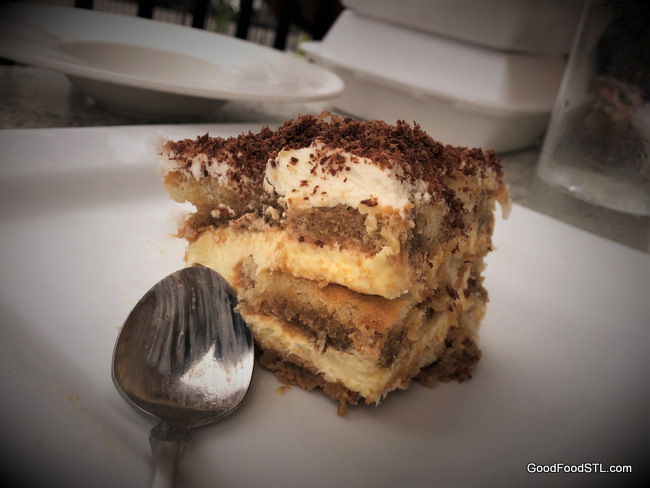 House made Tiramisu, a tsunami of goodness.

« How to Sweeten a Tomato
In a Bread and Butter Pickle »