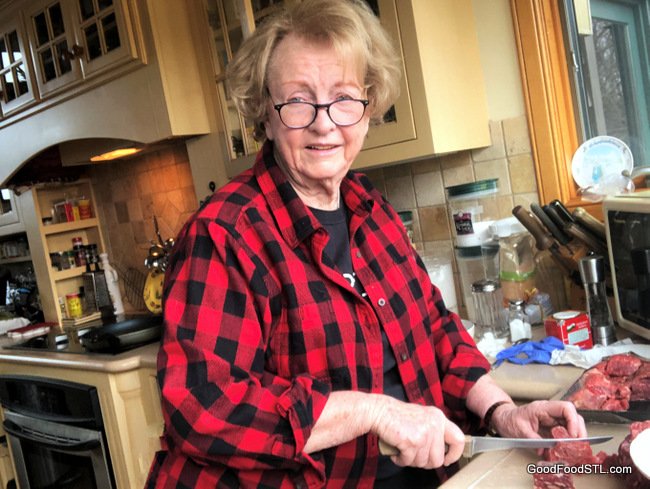 My dreams are most often humorous. In my slumber recently, I won a James Beard award and wrote a book that made it onto the New York Times bestseller list. Wow! Though delusional, it still put a smile on my face.

In my culinary reverie, I created the first “3-in-1 Meal,” that radically changed eating habits by combining an entrée, dessert and salad all in one. Yes, all in the same dish! I even gave the technique a cute name, but that part was missing from my recall.

My gastronomique marvel featured a chicken-dressing casserole, that included an apple pie filling (the dessert) and was crowned with a small Caesar Salad. You get all the flavors, albeit, combined into one. Perfect for a one-dish Thanksgiving. In my fantasy, the unique meal caught on like Toll House Cookies.

I figured out why I must have had this bizarre dream. I’d watched a documentary, “The Chef,” earlier in the evening. Before turning in, I’d read that chef Nick Bognar, (Indo and Nippon Tei), was one of nine national chefs to receive Food and Wine’s “Best New Chef” distinction. Now that’s a dream come true for this talented, hard-working young man.

A big shout out to Nick for his fine and much-deserved recognition. Keep the dream alive!

As to my bizarre dream of the “3 in 1 Meal,” I’m certain it will never catch on. But if it should, remember, you read it here first. 🙂 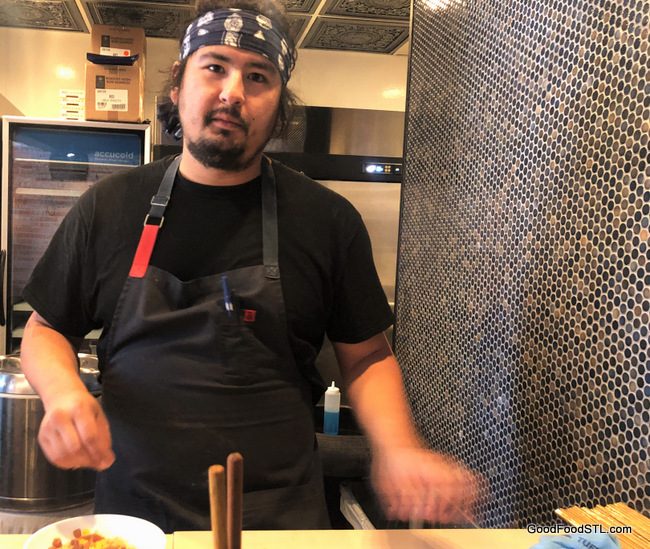 Chef Nick Bognar at at his restaurant INDO in the Botanical Heights area. Laura and I lunch at iNDO, the most recent addition to the Tower Grove/McRee culinary corner. It was Saturday afternoon and we were on an adventure. The folks at the next table—that we had not yet met—were soon to be a part of our adventure. . . .

If you read the foodie magazines, (Sauce, Feast) you know that iNDO is the hot, new Asian-inspired cafe of Chef Nick Bognar located across from Olio. Having eaten at his other place, Nippon Tei, I knew we were in for a treat, as we took one of the few tables at the front of the restaurant. (There’s much more space in the backroom, but I liked the windows overlooking the street.)

Chef-owner Nick Bogart at iNDO is a James Beard Award semi-finalist and owner of Nippon Tei on Manchester.

Getting Into the iNDO Menu

When our order arrived, I grabbed my i-Phone and quickly began snapping photos, so we could dig into the attractive dishes ASAP. Laura had the pork-lettuce wraps with a small side of a pesto-like sauce, that she declared should be sold in bottles it was so good. I had a short rib-noodle bowl that brimmed with flavor. And we shared the gyoza, a chicken and pork dumpling dish, that I’d earlier fallen in love with at Nippon Tei. Dinner menu. I neglected to photograph the lunch menu at the counter where we ordered. Gyoza is a half-moon shaped dumpling (sometimes referred to as a pot sticker), that’s usually filled with vegetables and ground pork. Juicy on the inside, crispy and golden on the outside, these tasty tidbits can be eaten as a snack or entree.

Ignore Your Mother; Talk to Strangers

As we oohed and aahed, the three people at the next table were doing the same over their dishes. We struck up a conversation with Bill Foster and Kathy Kuper and their friend Mary Ann. In one of those small-world moments, I realized I knew his father from long ago, when he labored in the Democratic vineyards of south Missouri.

As we conversed, I learned that Bill had retired from teaching at UMSL and Kathy was no longer working as a photojournalist and media producer. They were in the beverage business. Micro brewers. Yes, it all started about a decade ago after drinking a superb bottle of liqueur limoncella in London. When they inquired about its origins, the waiter said the concoction was homemade in Rome by his grandparents! On the Road to Micro Brewing

When Bill and Kathy returned to the U.S., they tried to reproduce the drink they’d enjoyed abroad, but were unsuccessful. It tasted awful, he said. Later they turned to making ginger liqueur. But it was a year and a half before they came up with a batch they were proud to serve friends. Those trying the new brew were elated, too, and urged the couple to produce it for sale. That was nearly a decade ago. Today they bottle the ginger liqueur at Crown Valley Distillery in Ste. Genevieve, MO, where the family still chops the fresh ginger themselves (son, Chris, has since joined the business). The ginger is combined with other spices, fine vodka and a lightly-oaken, single-distilled brandy made from Missouri wine.

Distributors in a dozen states are selling the product as Big O Ginger Liqueur. (It’s unclear as to whether the unique label is a bawdy reference, a tribute to its natural, organic-like nature, or a nod to his grandmother Opal’s name. Hmm. . . maybe all three. 🙂 )

Now, I’m not a connoisseur of spirits, but Big O’s many fans speak highly of the drink, using such terms as “mellow,” “ginger flavored with a hint of citrus,” “not too sweet or spicy,” and “balanced in flavor.” The drink was meant to be sipped, but it’s also become a preferred cocktail ingredient. Bill says that for summertime, it works well with fruit juices. Just mix the juice and Big O over ice and serve.

Down on the Corner

Next we dropped into AO&Co a few doors down and had a sip of rosé at their wine tasting before crossing the street to La Patisserie Chouquette bakery. I’ve not seen Pastry Chef Simone Fauvre in awhile, so we took time out for some “sweet talk.” Laura and I each came away with a pastry called “Darkness,” a heavenly chocolate, chocolate, chocolate bit of decadence, that we each vowed we’d share with a family member. Pastry Chef Simone Fauvre at La Patisserie Chouquette, She once made a birthday cake for me designed as three of my books stacked upon each other.

If you’re looking for a Saturday outing, the corner of Tower Grove and McRee is a good family destination—there’s even a children’s shop tucked into the mix. And you never know what interesting people you’ll run onto. A few weeks ago, I met the son of actress Florence Henderson (The Brady Bunch) while munching on a salad at Union Loafers.