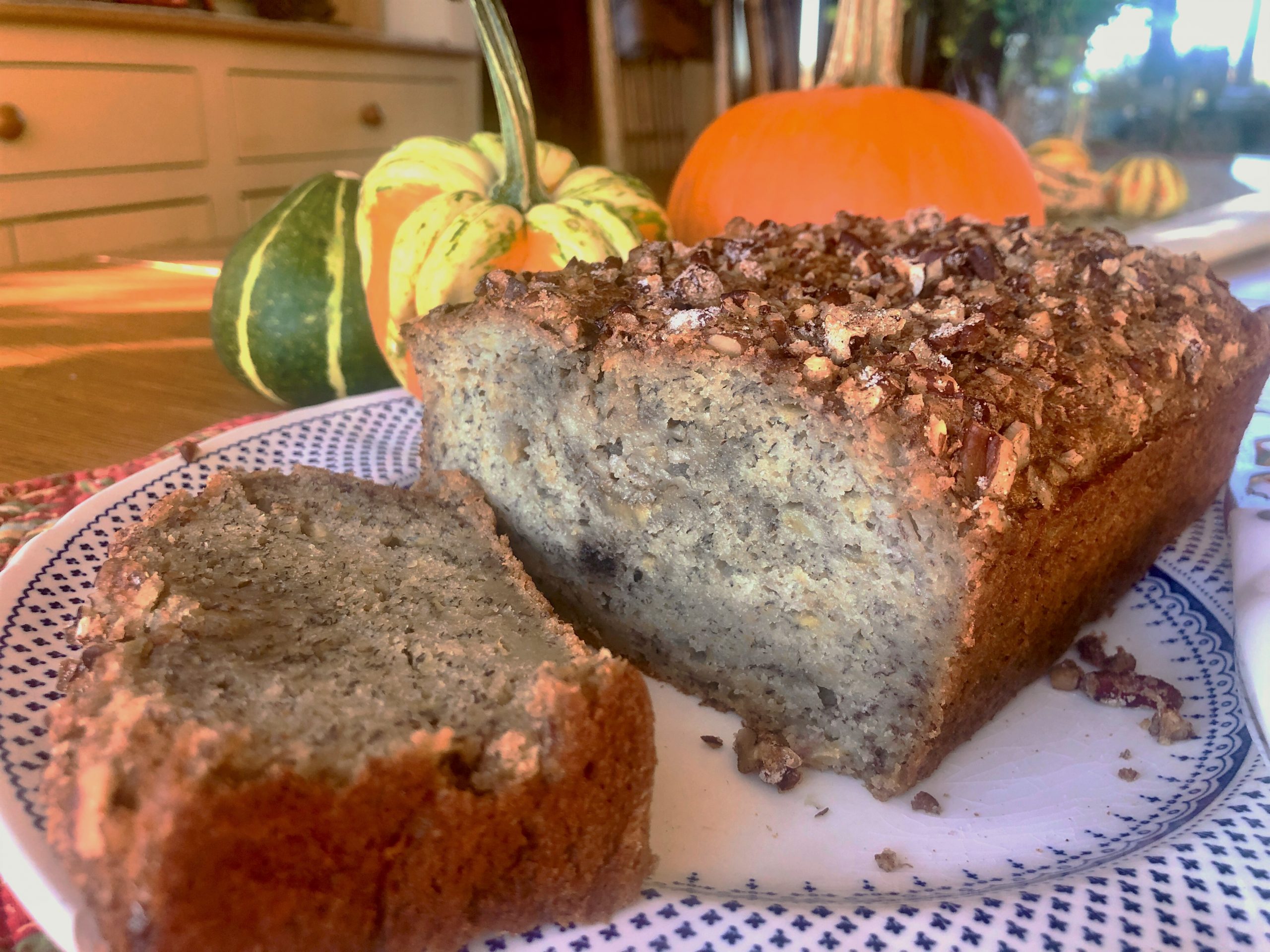 When I was a little girl, my mother would often send me to the basement to fetch an item from our large freezer chest. That seems like an easy enough task, but I had a fear of cellars, as we called them years ago.

I’d take a deep breath and run as fast as I could down the steps to retrieve an icy packet from the freezer. (Sometimes I’d get the wrong thing and had to make a second trip. I learned not to make mistakes.)

After getting the requested item, I’d race back up the stairs, my little heart thumping, but thankful I’d not run into bats or ghouls that might be lurking in the shadows. Sometimes I brought back sweet breads, usually bananas bread that Mama had baked from over-ripe-bananas. 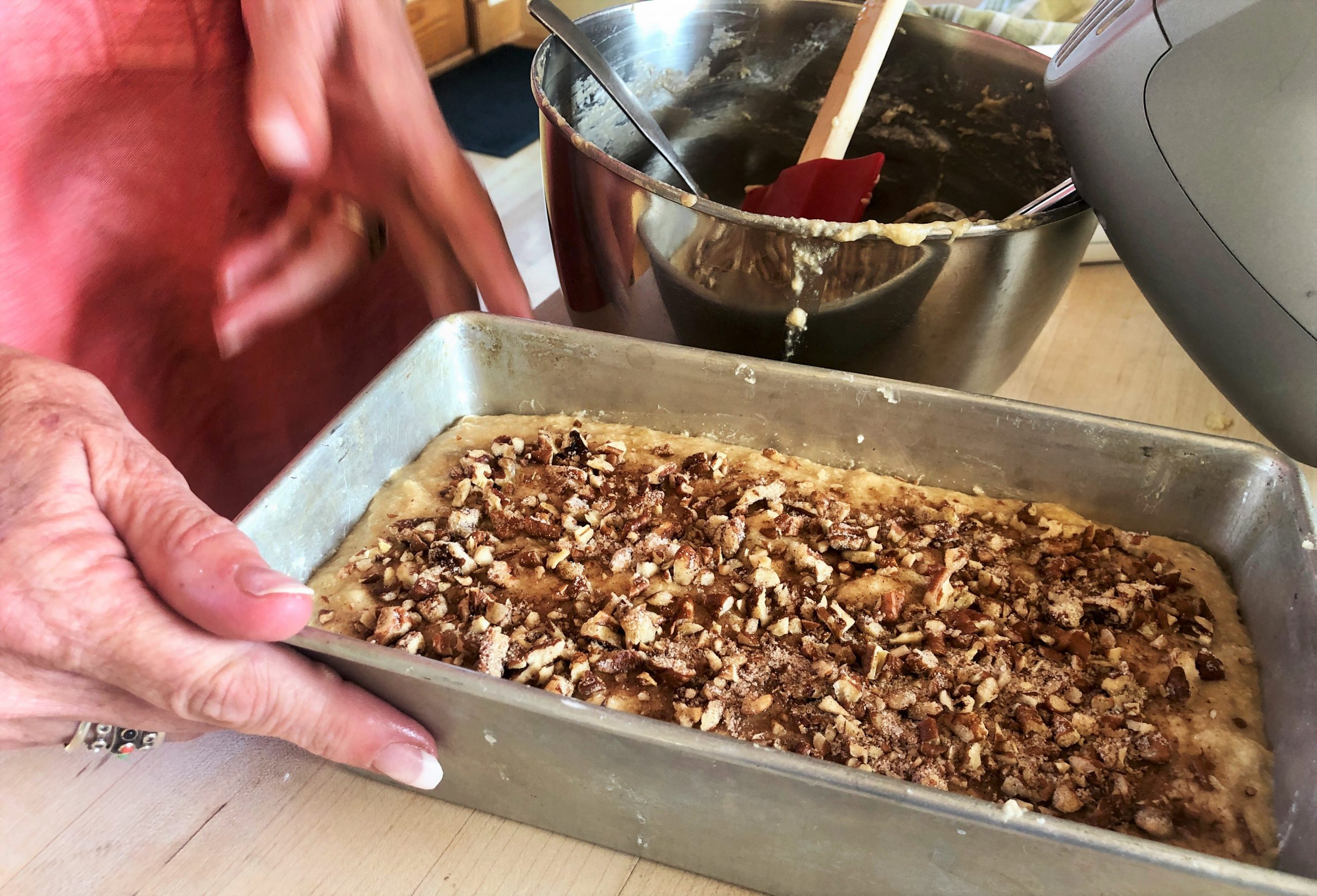 Ready for the oven

Later as a housewife, I discovered that banana bread is not one of those things you can cook spontaneously, even though the ingredients are few and simple. You must deliberately, or accidently, have 4-5 well-spotted bananas either on hand or carefully saved in the freezer for such occasions.

My inspiration for cooking this sweet indulgence came recently after allowing my bananas to unintentionally become soft and fragrant. I’ve not made a bread from bananas for sometime. (I now prefer the cranberry-orange-nut variety.)

I looked for a recipe on line. And what better place to go than the New York Times, where I found one that had a nut-sugar-cinnamon topping. Delish! The trick to a good banana bread is the overripe bananas, a well-greased baking pan. 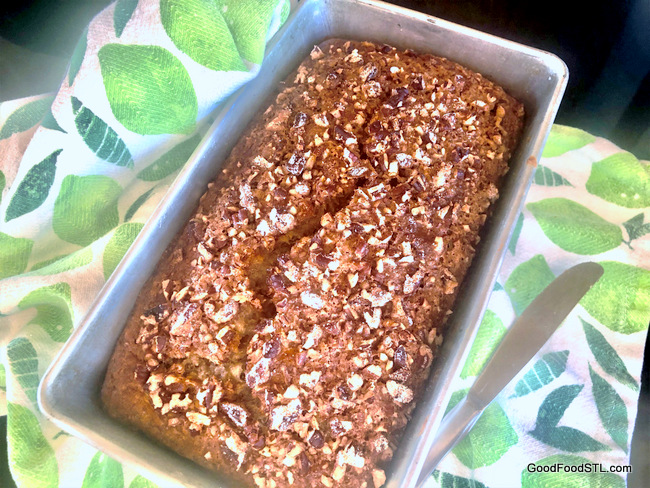 For the History Buffs: Banana bread first appeared in the Pillsbury cookbook in 1933. (We didn’t even have bananas available in this country until around 1870.)

The success of the dessert bread was probably due to two reasons: (1) corporate kitchens promoting the sale of flour and baking soda, and (2) the Great Depression. Resourceful housewives couldn’t stand to throw away food and learned to recycle leftovers.

« Food Between Teeth: Tell or Ignore?
A Dash of Rothchild Pineapple & Habanero Sauce »