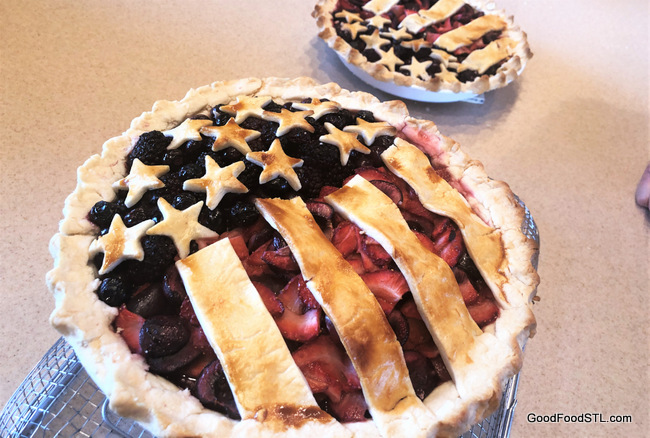 American Flag Pie, the finale to our weekend meal.

One of my 4th of July guests fashioned these patriotic pies, that made you want to snap to attention and salute before sitting down to dig in. Since the custom of barbecuing is such a revered American pastime, I’m thinking the flag pie would work for any summer event. At least, that’s my excuse for making it again.

I watched the pies being assembled and also watched a one-minute video on the Internet. It’s not all that hard. We made the crust from scratch, but a store-bough one would save time. A hand-made, aluminum foil divider kept the blueberries and blackberries from co-mingling with the red berries (strawberries, cherries). For best results you definitely need a small star-shaped cutter to make the design. After the stars and stripes go on, you brush the top with an egg wash to get a golden look when baked. (See below) Using a pie crust shield around the edges during the last half of the baking time prevents over-browning.

Puppies Enjoy a Holiday, Too

Bella and Elwood sun themselves on the lawn after a dip in the pond.

I was surprised that these “puppies” (less than a year old) were more interested in frolicking in the pond than nosing around the grill. Both are big dogs. Russ and Deb are owned by Bella, a Newfoundland. Our friend, Grace, has the St. Bernard-Akita mix, named Elwood (a female), of similar size and playful disposition. They love splashing in the water and sharing their after-shakes with anyone standing nearby. Anyone with a dog recognizes this “I-want-in” look, usually accompanied by a demanding bark. I call the photo: Wet Dogs at Entrance.

Ribs and Brats on the Grill

Moving on to the grill. Cooking ribs can be intimidating. So I was glad my grandson, Austin, had schooled himself in hog anatomy. As he trimmed the silver skin from the underside of the spareribs, he explained that there are four types of pork ribs:

Baby Back: These come from high on the pig’s back. They’re lean and meaty with little cartilage. (I suppose this is where my father’s expression, “eating high on the hog” came from.)

Spareribs: This cut, that’s found lower in the belly area, is fatty and flavorful. The rack is large boned and includes St. Louis ribs, a brisket bone, and meaty flap. (The racks we cooked came from Soulard Market.)

St. Louis Ribs: This is cut taken from the spareribs after trimming away the brisket bone and flap.

Country-Style Ribs: From the upper shoulder end of the loin. These ribs have the most meat to bone ratio.

After preparing, marinating and baking the ribs, Austin finished them off on the grill. Bravo! Ribs were well done, with good texture and spicing! Joining the ribs on the grill, were some brats from the Wurst House in Hermann. I’ve not found them in St. Louis, but they are available in Jeff City and on line. Diners on deck.  Russ, Deb, Grace, and I await the ribs being cooked nearby.