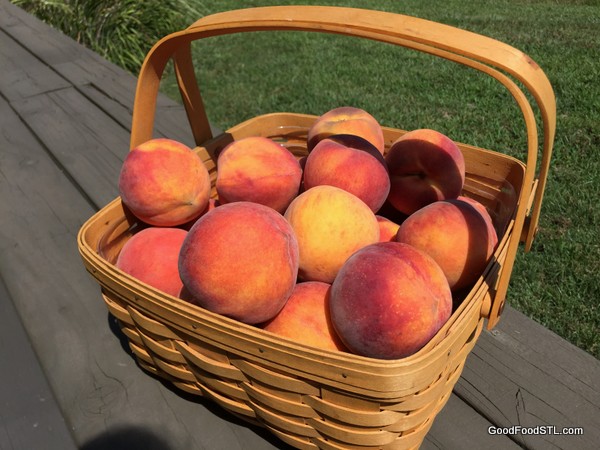 From Orchard to Oven

I always make a lattice top for a peach pie. If not, it might get mistaken for apple or gooseberry. When you see the juicy, sweet fruit poking through the lattice, you know you’re in for a summertime treat.

Typically, a peach pie is flavored with a bit of nutmeg and cinnamon. But this much-touted recipe from cookbook writer and pastry chef Zoe Francois (zoebakes.com) gets its kick from a 1/4 cup of booze! 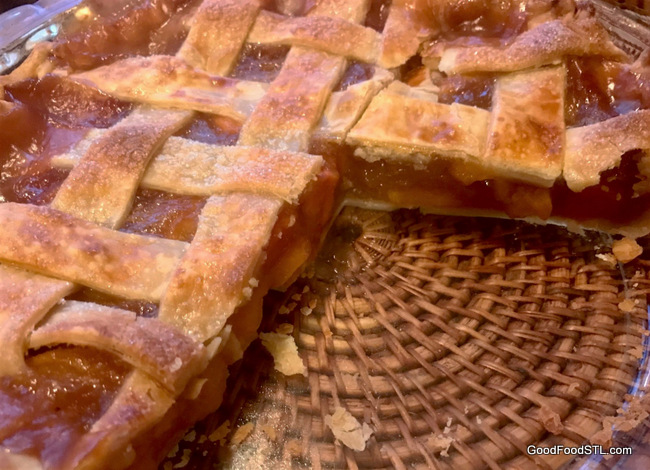 A Pie in the Baking 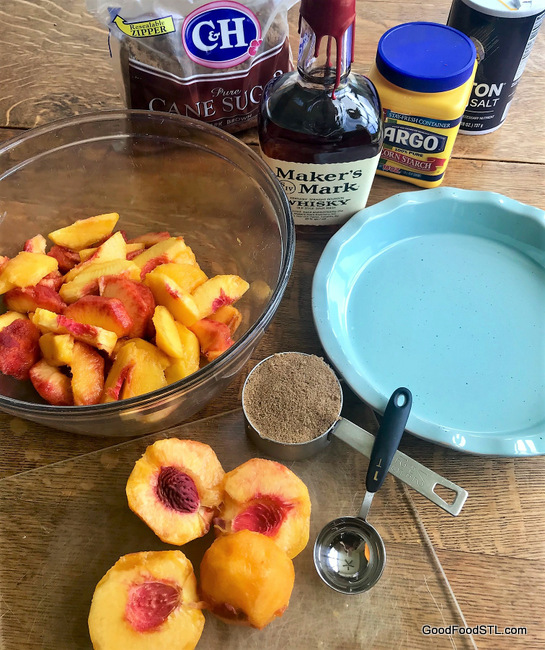 Sarah Carey, who ran Martha Stewart’s test kitchen called this peach pie “one of the best pies I’ve ever made!” 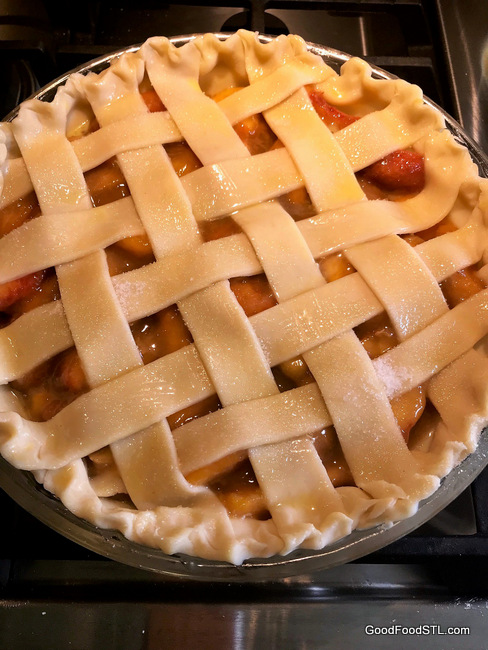 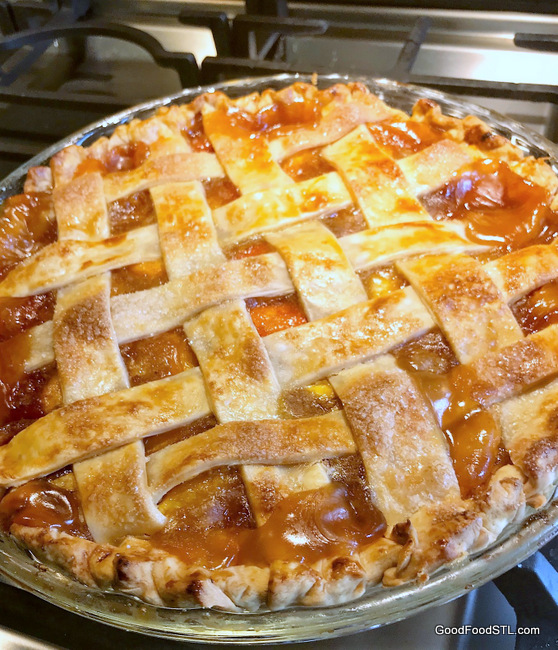 In the interest of full disclosure, I have not made this pie, but Cyndy did and she also took the photos. So I quizzed my “Home Kitchen Researcher:” The first time she made the pie I asked:

Me: Did the bourbon overwhelm the taste?

Cyndy: The pie had a deep, rich flavor, but it didn’t have a detectable bourbon taste at all.

Me:  Hmm. . . you did put the bourbon in the pie?  (Just kidding. Couldn’t resist a little kitchen humor). Did you make any changes in the recipe?

Cyndy: I distinctly remember putting the bourbon in the pie. I followed the recipe exactly, except for using brown sugar instead of raw.

Me: How did it compare with other peach pies you’ve made?

Cyndy: It was better than any peach pie I’ve made. No runny juices or soggy crust. Good flavor without being too sweet. And it sliced perfectly clean. You could pick up a piece by hand and eat it.

Me: Would you make it again?

Cyndy: This was a really, really good pie! Definitely, a keeper! And Joe agreed. 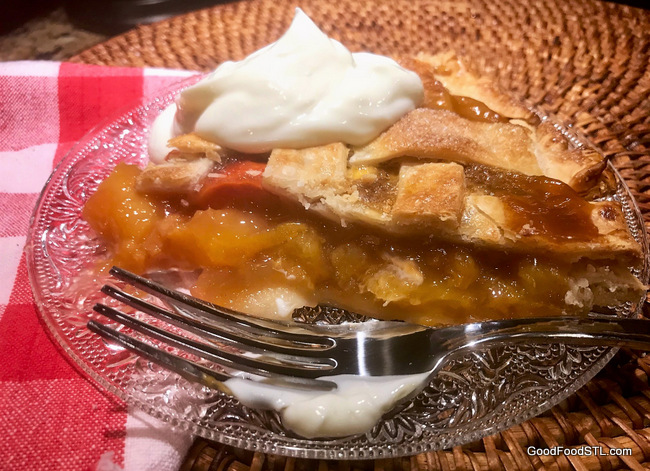 Testing Notes from Cyndy: “I used a Pillsbury roll out pie crust for the bottom and lattice. I marinated the peaches, sugar, whiskey, and salt for longer than the 30 minutes called for—closer to an hour.

“When thickening the juice and cornstarch, be sure to use a whisk rather than a spoon to avoid lumping. I used brow sugar rather than raw, but white would work, too.” 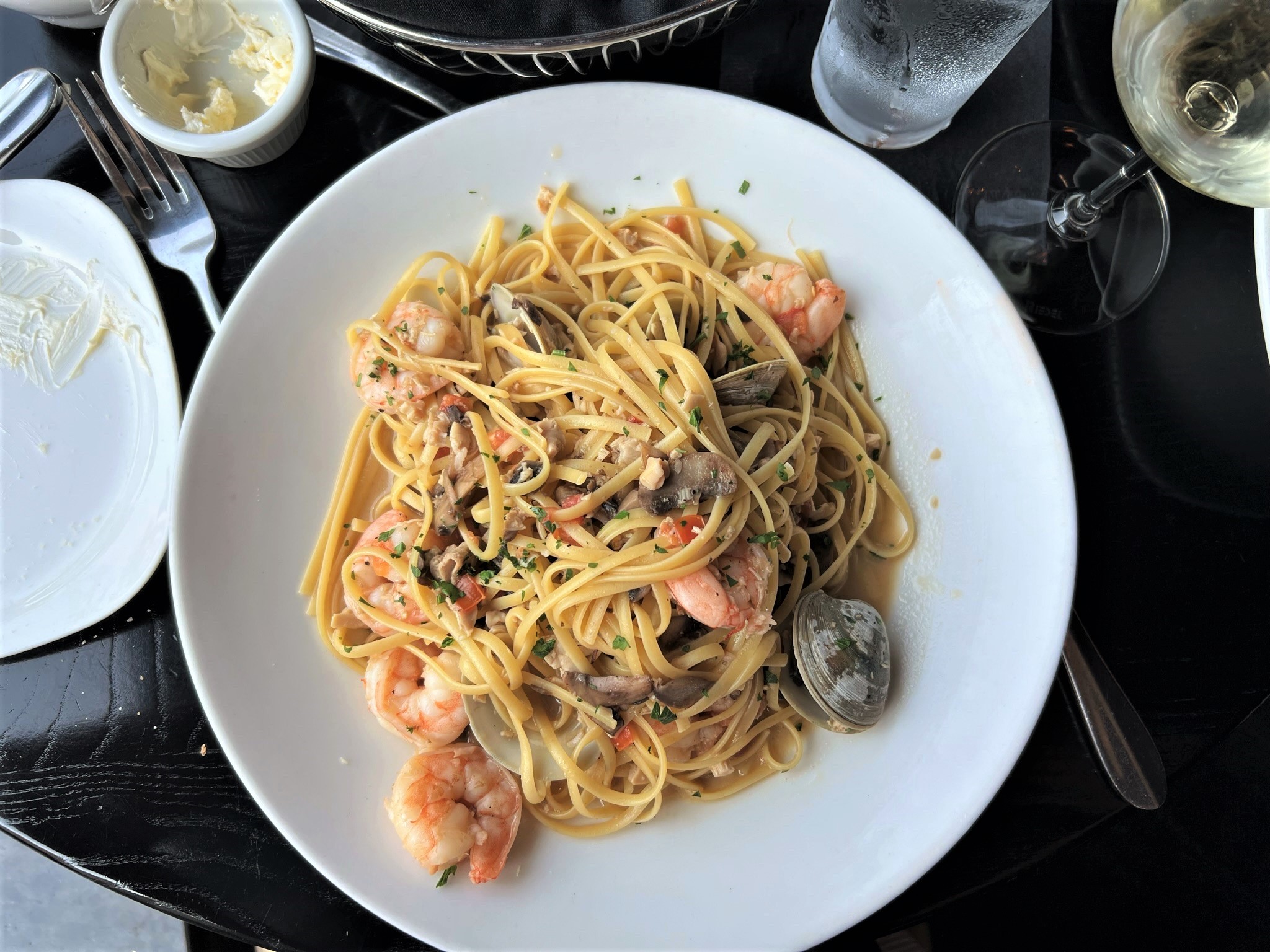 For a well-plated linguini, look no further than Cafe Napoli.

When I eat out, I want more than a menu and a fork. I don’t always get everything on my restaurant wish list, but here’s what I hope to find. Cafe Napoli scored nearly perfect.

One Word Says It All

We often sum up the things that make for enjoyable and memorable dining with the word “service.” Size and location of the restaurant doesn’t always make a difference. Even some hole-in-the-wall diners have figured out the kitchen and dining room details, that keep customers happy.

Upscale restaurants are especially good with the flourishes as is Cafe Napoli in Clayton. 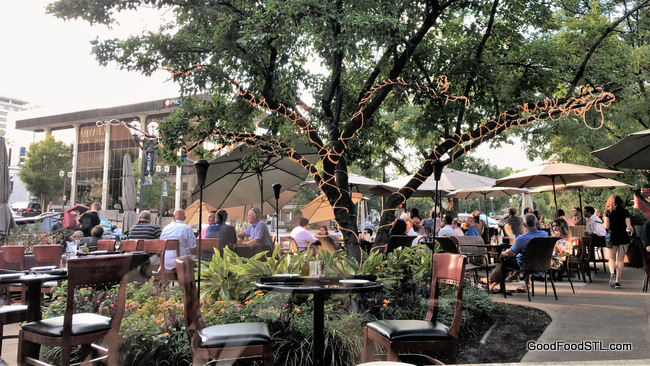 On a pleasant summer’s evening, there’s no more bustling intersection in Clayton than Bemiston and Forsyth.

Servers Are the Face of a Restaurant

Our warm welcome began at the door. This evening we were escorted to a window tablet for two at Cafe Napoli in Clayton. The spot happened to be my favorite in the dining room, unless I eat on their spacious patio.

Ice water and warm bread appeared immediately from a young woman, who took her task seriously throughout the evening. Our server, Bryan, guided us through the specials, showing enthusiasm for those he liked. He agreed to turn the appetizer eggplant parmesan that I ordered into an entrée-size portion. Perfect! 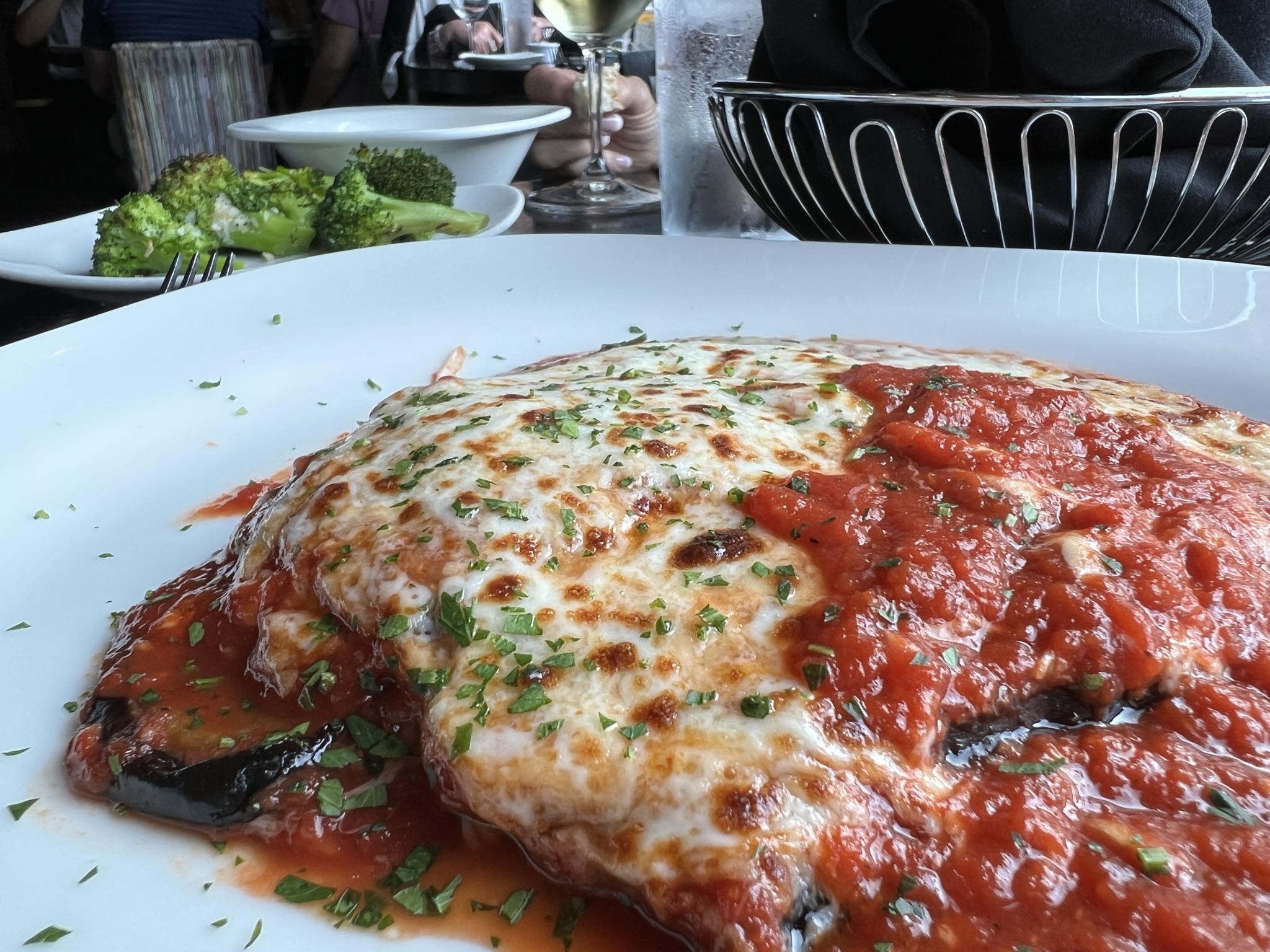 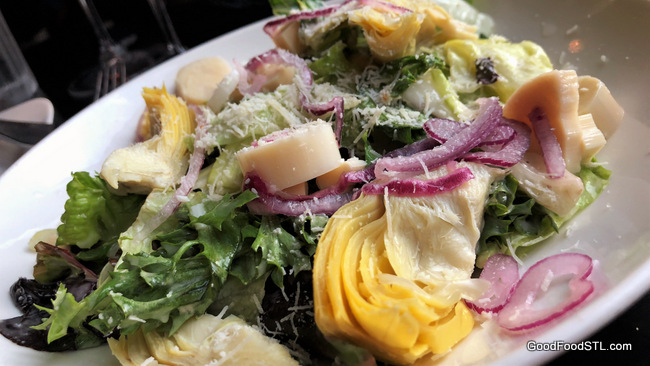 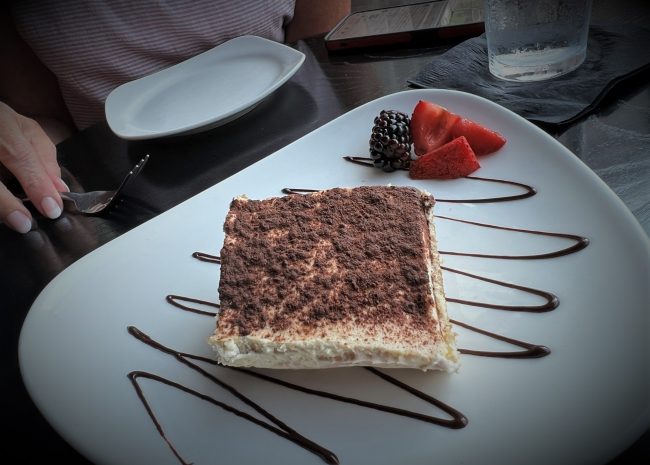 When we later shared a tiramisu, Bryan brought two forks and plates and a knife without us having to describe, what was needed to split a dessert.

Despite the evening rush hour, our server had time for a bit of small talk and inquired regularly as to our needs. In what was a nice Old World touch, a charming maître d’ with an Italian accent also checked our wellbeing.

A Touch of Deja Vu

I noticed at a nearby table for six, that four servers lined up behind the chairs of the waiting diners and set the plates down simultaneously. I had to smile. It was what we did at formal dinners at the Governor’s Mansion. The plate delivery, made with military precision, always amused our guests pleased by the unique presentation.

We left Cafe Napoli feeling well-fed and cared for. It was an evening of great attention to details—and that always makes a difference in restaurants—or anything else.