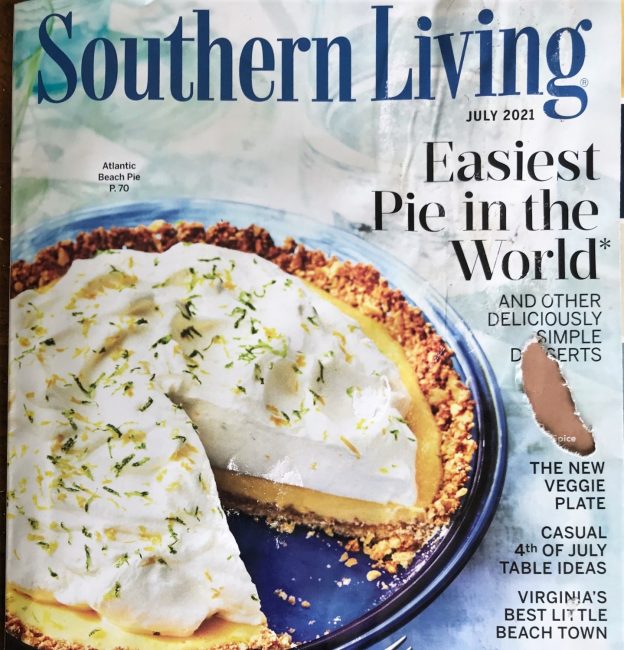 The current copy of Southern Living labels this citrusy creation, “The Easiest Pie in the World.”

Cyndy, my friend and cohort in culinary crime, sent me photos of a wonderful pie she’d made. It all started when I passed on my current copy of Southern Living, that featured Atlantic Beach Pie. She promptly made the popular pie and took it to a lakeside lunch with her friends Karen and Mary Ann in Columbia. Along with a salad and glass of wine, it brightened the day.

“At first, I was skeptical about the Saltine cracker crust,” she said. “I was tempted to go with a tried and true graham cracker base. But I’m glad now I stuck with the recipe. The flavors were just right.” Some have described the citrusy concoction as a cross between key lime pie and a lemon meringue.

A Pie with a Cult Following

When I checked, I found that the old, but updated, recipe was popularized by Chef Bill Smith at Crook’s Corner restaurant in Chapel Hill, NC. The pie has since become a favorite of the online fooderati. Southern Living included a video in their coverage. The New York Times, Martha Stewart, countless magazines, newspapers, and food bloggers have highlighted the dessert.

Following coverage by NPR’s “All Things Considered“, Crook’s Corner was overrun with requests for the pie. Lines formed out the door and diners called to see if there was any left. At the time, the lemony pie was only offered occasionally, but it immediately went on the permanent menu.

The Story Behind the Hubbub

Chef Smith was inspired by a version of the pie served in seafood restaurants along the coast of North Carolina, when he was a kid. Back then, it was thought that if you ate sweets after a seafood meal you’d die, or, at least, get sick. (Bill’s mother believed this and does to this day, he said.)

Ahh. . . but there was an exception: Atlantic Beach Pie. It was one of the few desserts on costal menus. Today the updated version of the pie has made a comeback. Jeni’s even offers an ice cream flavor to commemorate the tasty dessert.

Sadly, Crook’s Corner restaurant was done in by Covid. It closed last month after 40 years of serving Southern favorites. Owner Shannon Healey recalled their culinary shtick. “Instead of making simple things sound fancy, [we] did the opposite,” he said, “like using the words ‘garlic mayonnaise’ on the menu instead of aioli. The tables looked like an old diner on purpose. When it opened, the idea that you were doing excellent food in a non-white-tablecloth environment was very different.”

Crook’s Corner is gone, but not forgotten. Atlantic Beach Pie lives on in recipe files across the country. 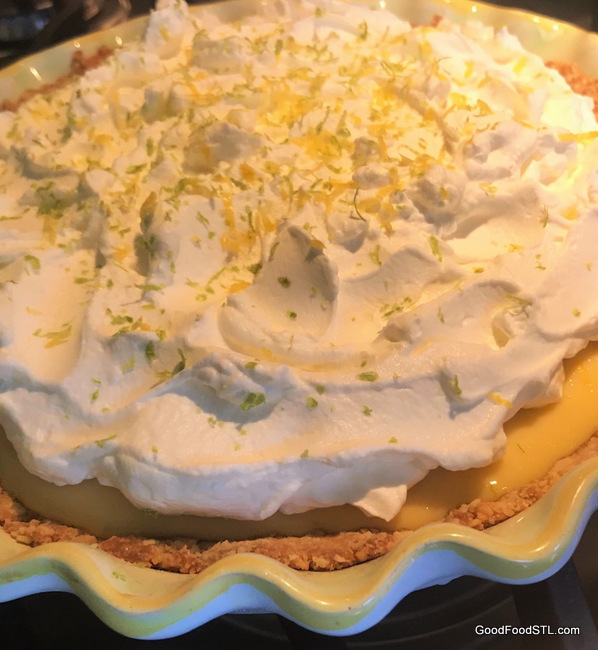 This is Cyndy’s creation, which I think compares favorably with the one on the cover of Southern Living. Some pie advocates prefer meringue topping with a Ritz cracker crust.  But Chef Bill Smith has always favored a Saltine base and whipped cream topping.