After a rough day in Covid-land, a satisfying BLT maybe just what you need.

As we all know, BLT’s are the reason that ripe, juicy tomatoes were created.  I was drawn to a recent post in the New York Times cooking section on the much-beloved sandwich. The recipe had pretty much your usual ingredients: thick-cut bacon, tomato slices, butter lettuce leaves, bread and mayo. But the writer threw in a twist.

What Turns an Average BLT into a Stupendous One?

While the bacon cooks, you marinate the sliced tomatoes in red wine vinegar and oil. Hmm . . . I’ve never thought to do that. For two sandwiches, the writer used 2 teaspoon vinegar to 1 tablespoon olive oil, and a shake of flaky sea salt and freshly ground pepper. 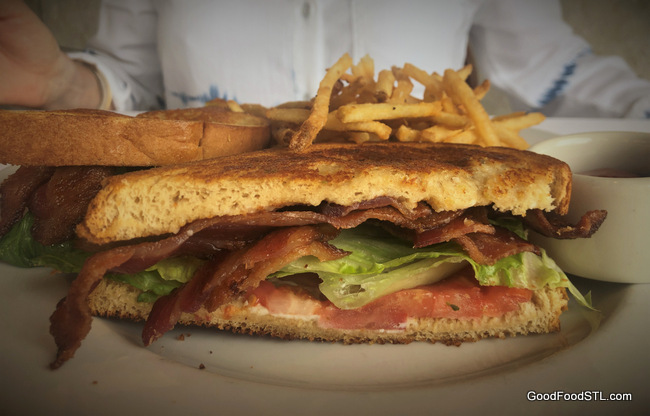 She builds this pyramid of perfection by generously smearing the inside of the bread with mayonnaise and a dash of olive oil. Next comes the tomatoes with some of their vinegar still clinging. Divide among the two sandwiches and top with lettuce. Add bacon and chow down.

Important: Don’t skip on the quality of the ingredients. 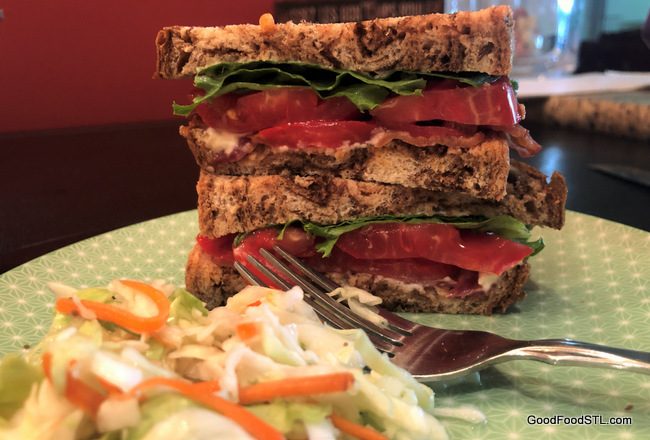 This BLT on marble rye added another level of lusciousness. 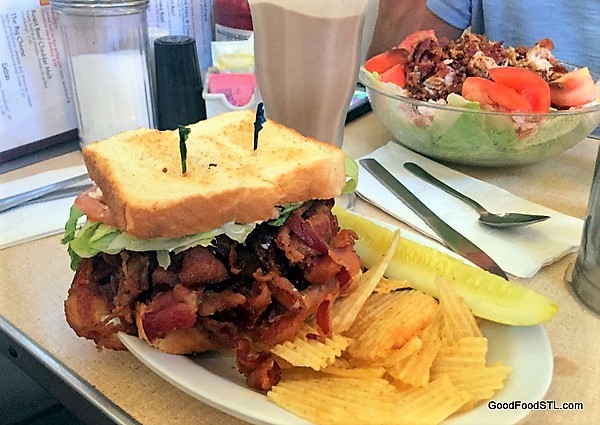 I’ve never had the “Heart-Stopping BLT” at Crown Candy. But I once asked a guy at the next table if I could photograph this bit of decadence on his plate. The tower of porcine extravagance includes 14 strips of bacon! Hmm. . . to salve your conscience, I guess you could take half the bacon home and divvy it up with Fido. Bacon aficionados are picky about their pork. Some like it limp while others prefer crisp and crunchy. I prefer the latter, which is nicely achieved with baked bacon.

I admired my friends plate when we were eating breakfast at the Southwest Diner.  It was the day after Christmas and we were headed for the mall as one does at such times of the year. But first we dropped by the famed St. Louis diner known for it’s breakfast and lunch specialties. Southwest Diner when we arrived; ten minutes later every table was full.

Since early morning fare is the specialty at the corner of Southwest and Abbot, I got a cup of coffee and a short stack of their Buttermilk Cornmeal Pancakes. Unless you’re doings some heavy ditch digging, the two huge griddle cakes will be more than enough.  I wasn’t hungry again until late afternoon. At Southwest the syrup comes in a Coke bottle and the Cornmeal Pancakes are the size of a small skillet.

Seeing the perfect strips of bacon on my friends plate got me to thinking how best to cook the old breakfast standby.  There are several options.  Frying in the cast iron skillet is tried and true.  But microwaving produces a fast, crispy, no-fuss version.

Still, there are those who much prefer oven baking, especially for large quantities. This can be done best on a cookie sheet lined with parchment paper or foil.  Just slip the tray into a 400 degree oven for about 20 minutes, or till crispy.  Ina Garten uses a cooling rack on top the parchment to help grease drip away as the bacon cooks.  Some like to flip the strips or blot the grease from the meat after 7-8 minutes and continue cooking to desired crispiness.

Jazz up Those Pork Strips Place a pound of bacon on parchment paper in a rimmed cooking sheet.

Candied bacon is a neat treat and easy to make. Just mix a teaspoon of cinnamon to a cup of brown sugar and spread it out on a paper plate. Lay each bacon slice on the mixture and press gently to coat on both sides before baking. Those who have experimented extensively on this subject, say they prefer brushing maple syrup on the raw bacon.  Some say a coating of Jack Daniels adds just the right flavor.  I’ve not tried this, but if any of you have, please report in.  You can experiment with several versions all on the same cooking tray. Baked bacon is evenly cooked and crispy, a tad more chewy than when it’s fried in a skillet.

Those who bake bacon are usually serving a large number of people and wanting all the bacon done at the same time.  But if you cook up a pound or two, you can always freeze it to be warmed later in the oven or microwaved for a few seconds. To make sure slices remain intact, wrap them in plastic and place in a freezer container.  Any crumbles can be kept for baked potatoes, omelets, or other toppings.