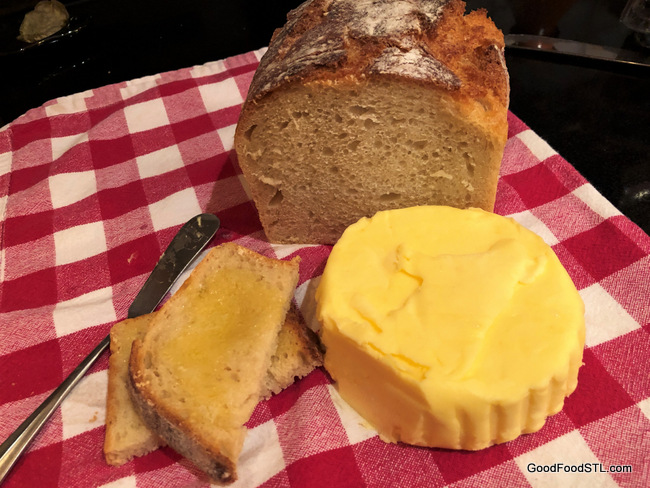 I was introduced to Beurre de Baratte by Robin and Lisa, who buy it from John Parker (Parker’s Table).

Beurre de Baratte is a butter made in Normandy, apparently from very contented French cows. Those who have discovered this rustic spread speak of it with the same reverence you’d afford a $1,200 Bordeaux.

The “bovine caviar” is churned the old-fashioned way and comes with an artery-groaning 82% fat content. Rodolphe Le Meunier, a 3rd generation cheese monger, whose name appears on the gold foil wrapper, explained how the Old World butter is made. Cream is injected with starter cultures—much like yogurt—then churned and hand-molded. One taste and you know why Chef Josiah Citrin of Melisse in Santa Monica called it “the best butter in America.” (Though I’ve read the Trappist monks in Japan turn out a comparable product.) 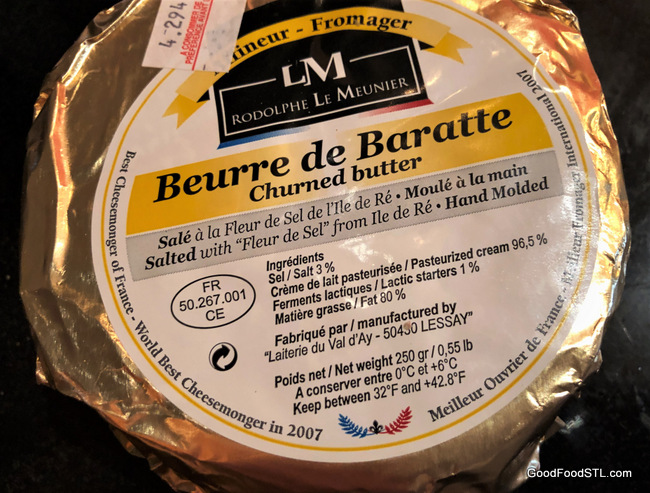 Beurre de Baratte comes in two varieties: one sprinkled with Fleur de Sel (salted, and the better to spread on bread) and Doux (a sweet, unsalted version).

The pungent, deep yellow butter is a favorite in LA’s best restaurants—some even add a surcharge for the treat. But before trying it, let me warn you, that the creamy masterpiece runs $12 a half pound or about $18-$20 per pound!

The highfalutin spread caused writer and food critic Ruth Reichl to say, “This butter is dangerous!” She went on to explain. “With a loaf of bread, I could go through all of this butter.” I had the same feeling as I smeared a sliver on a slice of toast (made appropriately from a French Peasant loaf I got at Breadsmith). This is good stuff.

I wonder if this was the butter Julia Child was referring to when she wrote: “I always give my bird a generous butter massage before I put it in the oven. Why? Because I think the chicken likes it — and, more important, I like to give it.”

For me, there was a bit of deja vu that came with my first taste of this French ambrosia. I recall eating butter made in a churn, when visiting relatives in Virginia during WW2. It was the real McCoy! At our house, in the interest of the war effort, we were eating a funky looking substance called oleomargarine. You had to add a capsule of yellow dye, so it didn’t look like lard.

Thanks heavens, we won the war, saved Normandy, and put those cows backs to work! 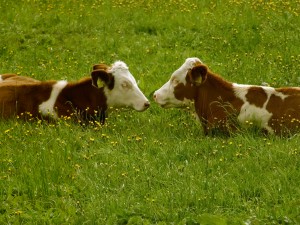 “Mabel, I’m ‘utterly’ confused. What do those French cows have that we don’t?”

« A Lamb Ramen Pop-Up
Thanksgiving at the Farm: A Photo Album »