This time of the year, most of us give a hat tip to St. Patrick. We wear a green tie or scarf, eat green-tinted pancakes, or cook up a pot of corn beef and cabbage.  I’m convinced we celebrate the good saint far more than those living on the ol’ sod.  On my first trip to Ireland more than 20 years ago, I made a point of seeking out the little town of Downpatrick, where the snake-banishing bishop is said to be buried.  The peaceful site in Northern Ireland is marked by an enormous flat rock, with a large, disfiguring chip in one corner. Unlike Blarney Castle, there were no long lines; no tourist shops or tee-shirt and trinket sellers. Neither were there any highway signs hawking the location. There was just an ancient and unpretentious marker on the lawn of the local cathedral.

But on this side of the pond, the ancient bishop gets due recognition. I lived in Rolla, where the students at Missouri S&T consider the 5th century icon the patron saint of engineers and celebrate his birthday for the first 50 days of each year. They wear green sweat shirts, grow “green” beards, drink green beverages, design elaborate shillelaghs, carve giant tree trunks into cudgels, compete in contests of dubious distinction, and sponsor an elaborate parade. The campus is defended from a rubber snake invasion by shillelagh wielding students. The annual Follies is a time for jokes, poetry, and games, and a display of St. Pat’s swag from years past.

Students also conduct a finely costumed knighting ceremony and dance that, at one time, was meant to mimic St. Louis’ glitzy Veiled Prophet Ball. It is said that 40,000 people attended the weekend celebration in 2005.  In a town of 19,000 that’s quite an influx of merrymakers. In 2009, as I was about to be knighted by St. Patrick (upright sword in hand) after kissing the “Blarney Stone” atop the green-skirted table.

Memories of St. Pat’s Past

During my 40 years in Rolla, I remember mid-March as the highlight of the social season.  Youngsters looked forward to the many activities with the same glee they showed for snow days.  Some years ago, I was dubbed an Honorary Knights of St. Patrick, an honor that comes with no little distinction.  I was given a lovely green sash, a weighty medallion, derby and cane, and a chance to kiss a fake Blarney Stone—a far easier task then bending over backward to kiss the real one. The first St. Patrick’s Day celebration at the college in Rolla (then known as MSM), was held in 1908.  Playful, class-skipping students marched up Pine Street to the campus and demanded that Dr. Young, the school’s director, kneel and be dubbed the first Honorary Knight of St. Patrick. No doubt sensing the solemnity of the occasion, he knelt, and the tradition of bestowing knighthood has continued. 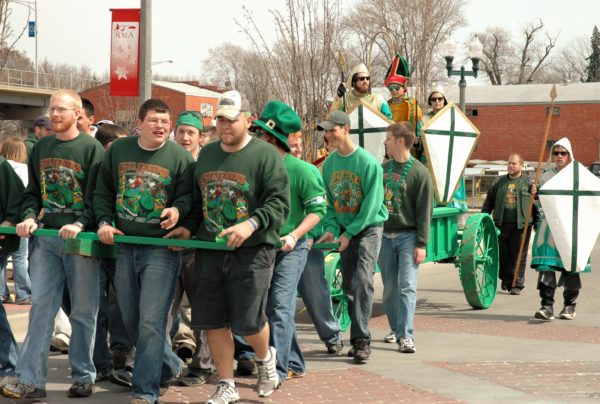 A more current St. Patrick (’05) pulled through the streets of Rolla, as ceremoniously as ever, attired in the traditional bishop’s mitre and cape, updated with the addition of trendy sunglasses.

In recent years, much of the intemperate behavior associated with the event has been curtailed in the interest of student and public safety. Thankfully, “Alice” has gone to her long-deserved grave, with only her many survivors left to tell the tale of their immersion in the vile concoction.

Today student organizations earn competitive points by collecting canned food, volunteering, and giving to the blood drive. Yes, traditions evolve and some for the better. After 108-years of celebration, Rolla knows how to do St. Patrick’s Day with gusto. Today a bronze sculpture of the patron saint hovers over the campus, bringing a calm and reassuring presence to Missouri S&T students, who have occasional bouts of revelry in his name.