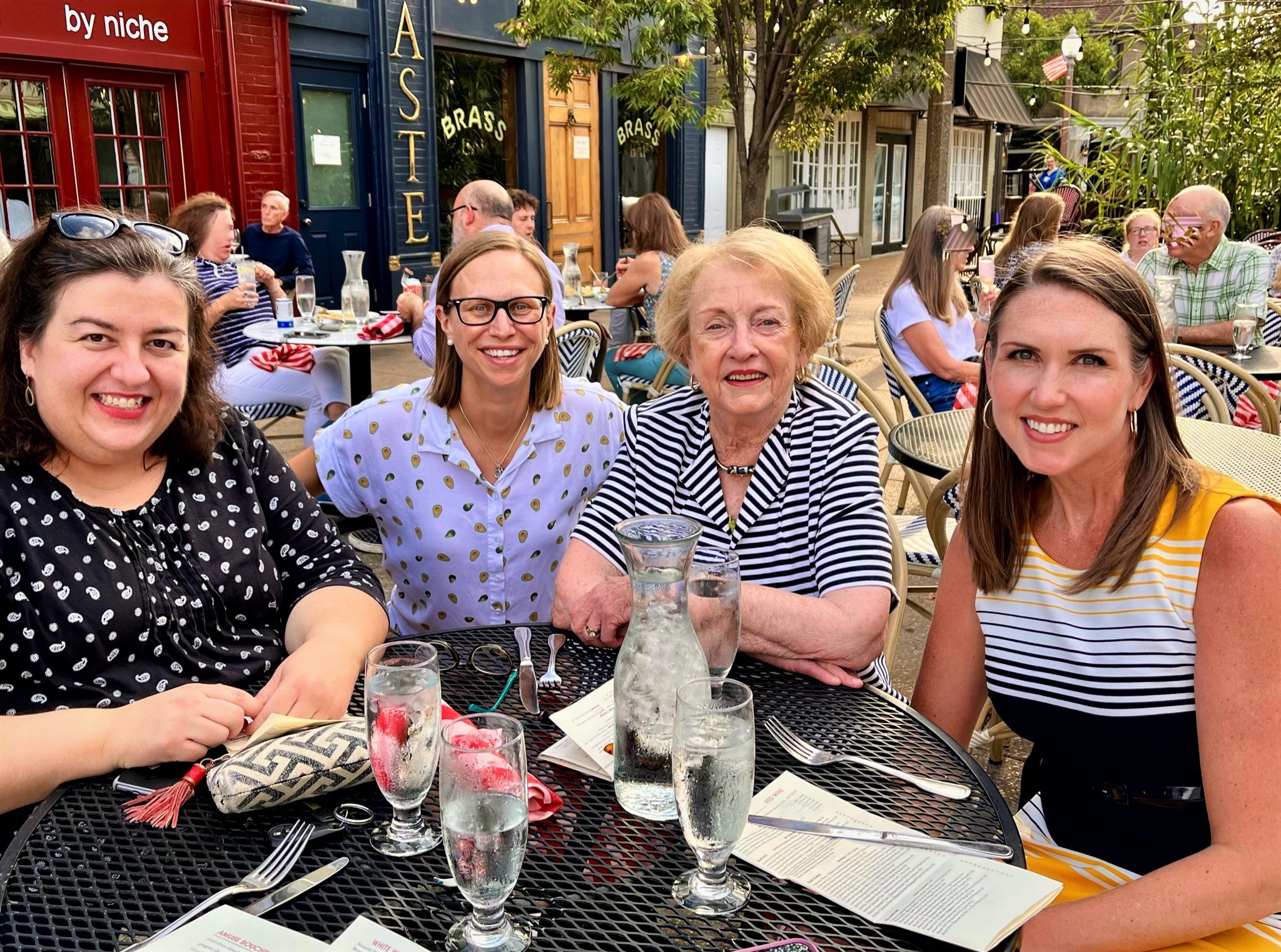 Dining on the Champs Élysées? Well, not really. But Brasserie in the Central West End is the next best thing for a girls’ night out. (Laura, Kelsey, me, Mindy)

“Paris Is a Moveable Feast”

Since the drenching, scorching weather in St. Louis has subsided, it’s time to return to patio dining. And where better than Brasserie?

I recently met up with several longtime friends at the Central West End bistro for a pretend evening in Paris. (Come to think of it, my mother wore a perfume called Evening in Paris. The smell lingers with me still.)

Brasserie is a great place to test out Ernest Hemingway’s assertion that “Paris is a moveable feast.” Take a look—or should I say, a visual taste of the evening:

Bliss on a Plate 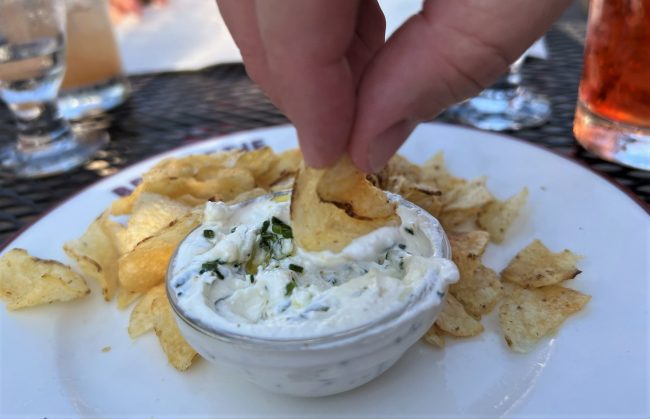 A table nibbler of chips and dip 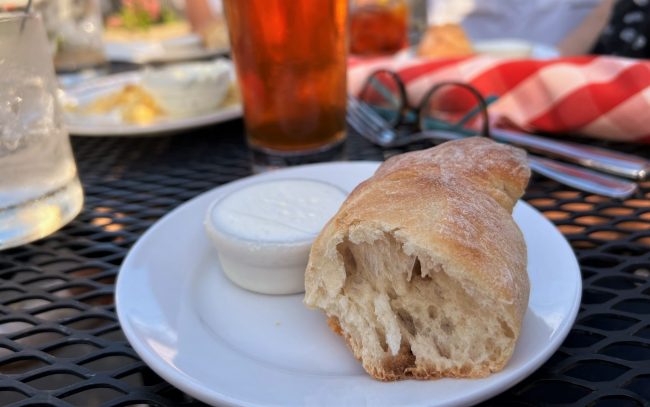 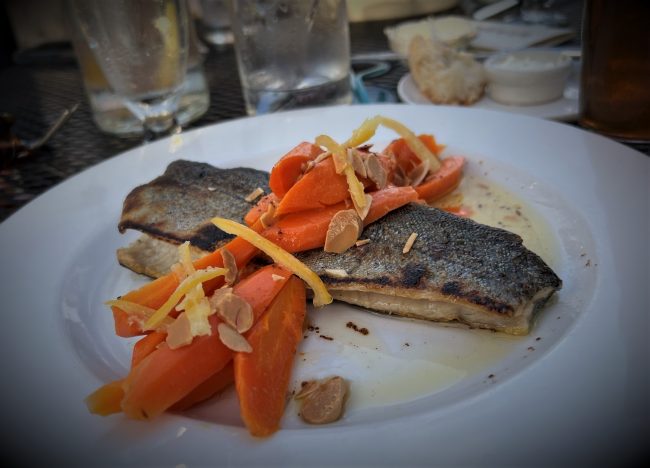 Trout Amandine with carrots, preserved lemon, and almonds. I often order this, because it’s so doggone gooood! I love the slivers of preserved lemon, that add tang to the fish/vegetable entrée. 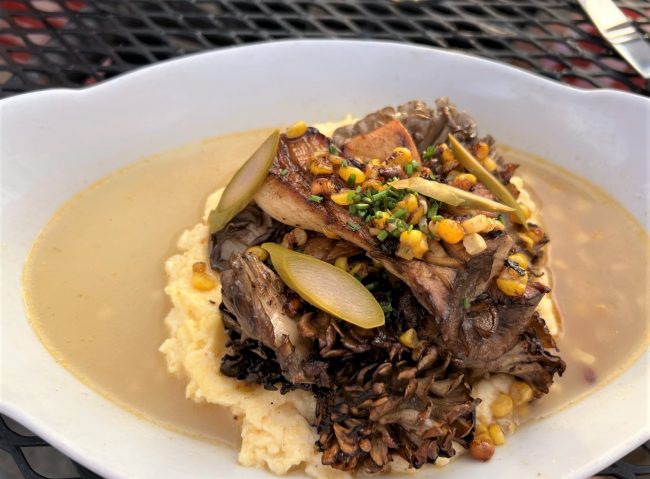 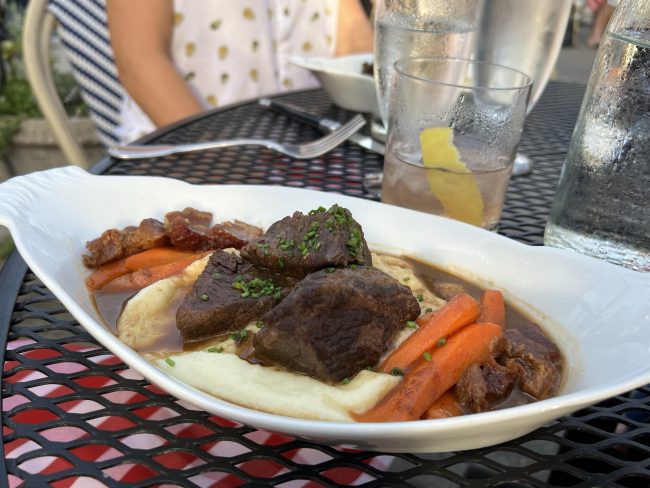 This dish of Braised Beef with glazed carrots, bacon lardons, and potato puree has the feel of the French countryside. 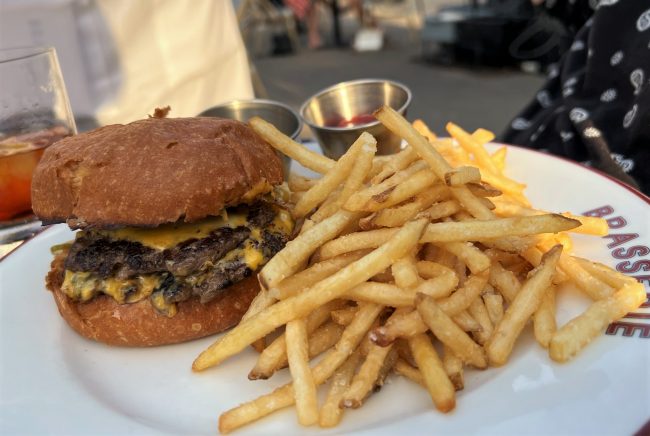 Let’s pause in this photo review for a word about “pomme frites,” which means “apples of the earth.” Brasserie’s seriously delicious frites remind me of those I ate at Chez L’ami Louis in Paris some years ago.

Maybe they’re cooked in duck fat like the French do. I don’t know. Although a Brasserie server once told me they were not. All I know is that they’re addictive and ample, though not quite as skinny and mountainous as Chez Louis. (See below) 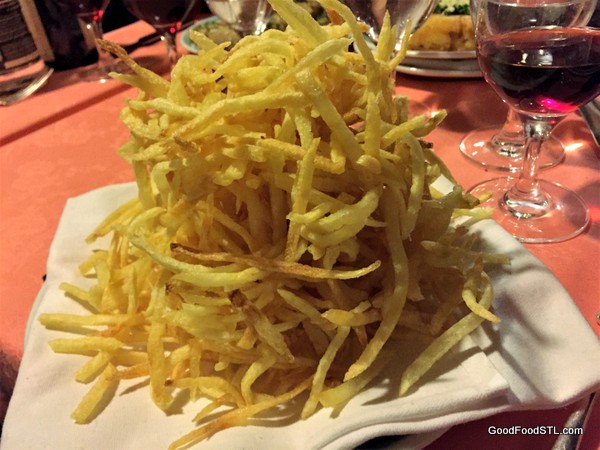 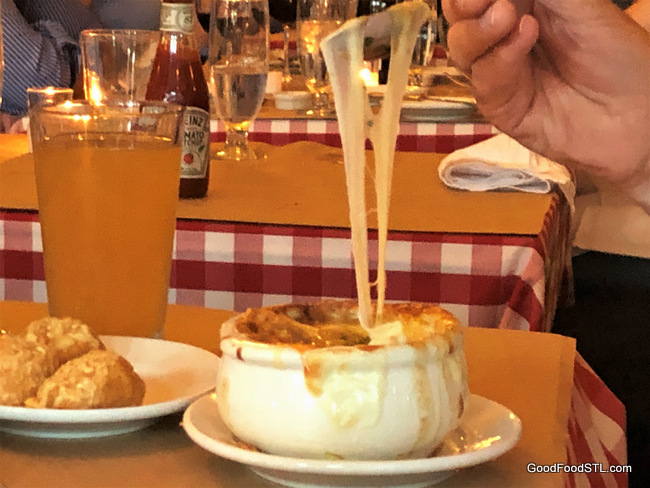 I couldn’t resist including this photo of French Onion Soup I had a few years back at Brasserie. Happily, it’s still a menu highlight.

We topped off the meal sharing two desserts. One, a plate of profiteroles, the sine que non of any French menu. The light, puffy pastry was filled with ice cream and drizzled with chocolate syrup for added decadence. 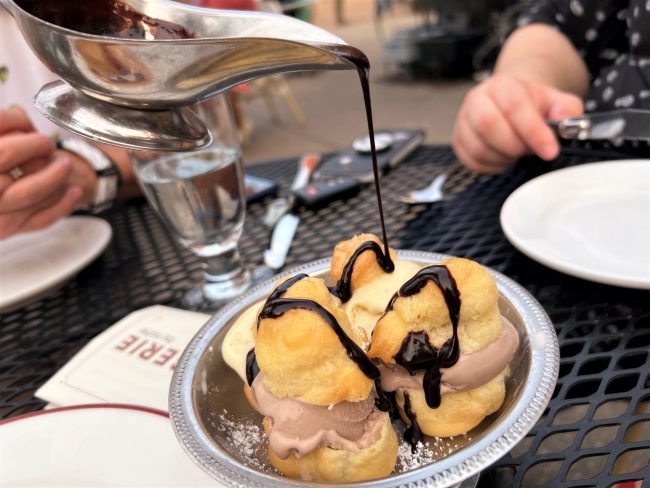 A dessert combo of Profiteroles (2 with vanilla and 2 with chocolate malt ice cream) gets the final touch. 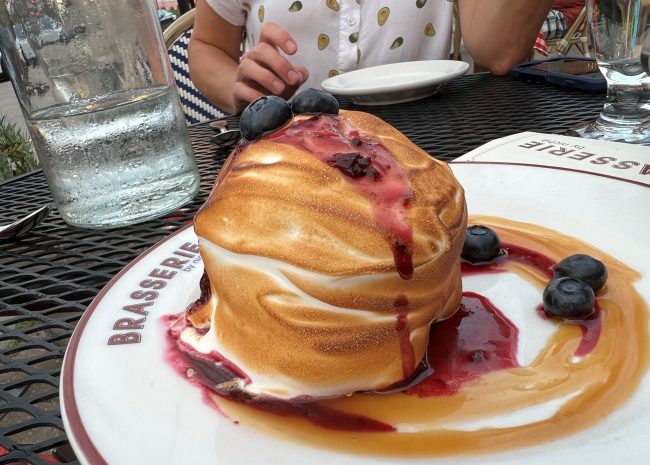 Blueberry Baked Alaska. I once made an old-fashioned Baked Alaska of ice cream and meringue popular in the ’50s. This one appears to be finished off with a hand-held kitchen torch, rather than risked in the oven as it once was.

Your Ticket to Paris

While Brasserie is far larger than it’s French counterparts, (see below), it still maintains the quaintness of a street cafe as it serves up haute cuisine alongside rustic fare.

If you can’t get to Europe anytime soon, Brasserie is a good, local alternative. 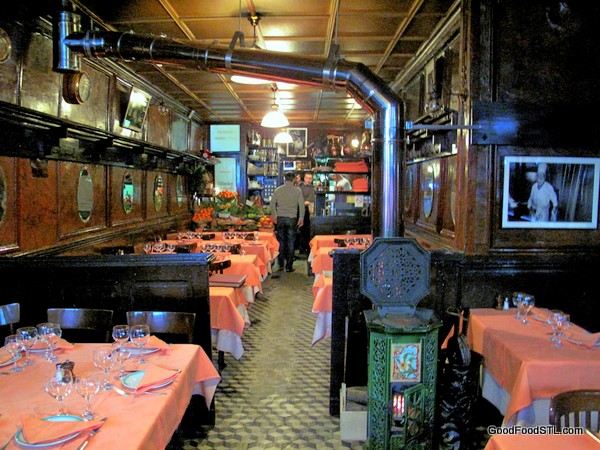 The Old World ambiance of Brasserie always reminds me of Chez L’ami Louis in Paris, where I once enjoyed a dinner.