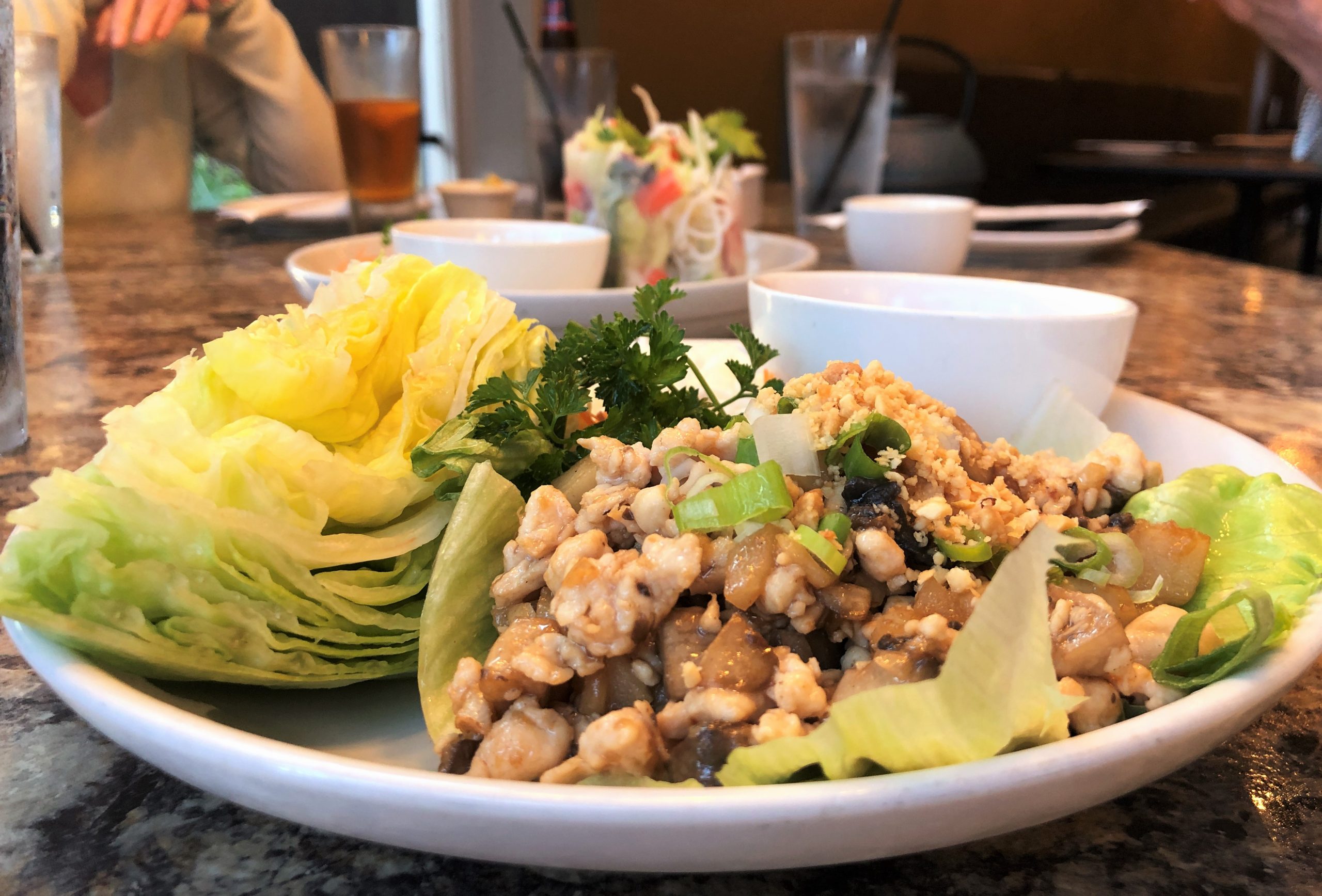 If you haven’t been to VP Square, stop everything you’re doing and go. The place is billed as Asian fusion. That used to mean a mishmash of flavors from the other side of the world. But VP has upped the ante in both taste and presentation. 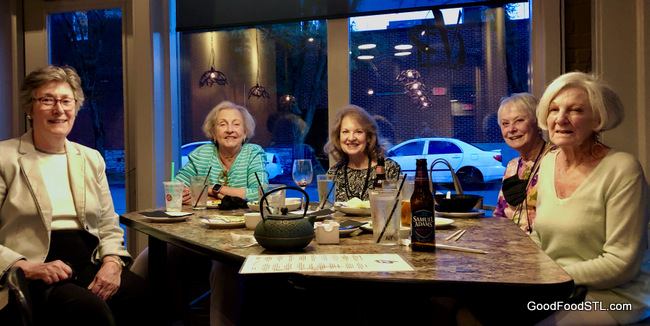 An evening out on the town.

Recently my group, that dines monthly—we call ourselves “Women Who Eat Out”—selected the tidy, spacious restaurant on Juniata, just off South Grand.

Wilma, who had discovered the place earlier, suggested getting a selection of appetizers to share. A good plan for nibbler such as we—though I regret not asking for a larger plate to keep the sauces from mingling.

I’ve not yet tried the entrees. Nor the Bento Box lunch sampler. That will require another trip—and soon!

These Food Photos Tell It All 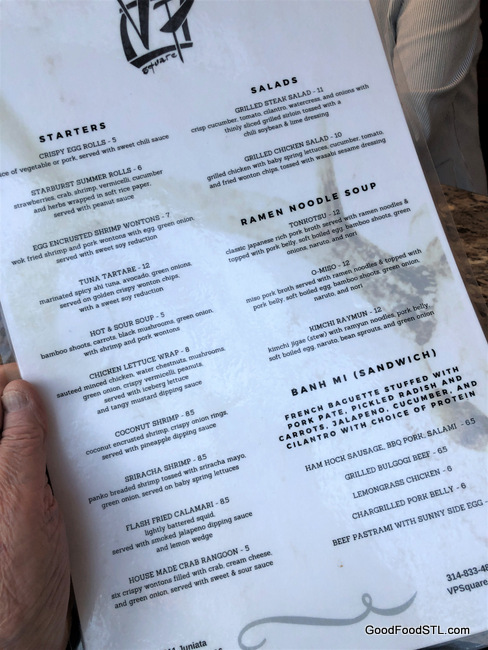 The menu of Starters 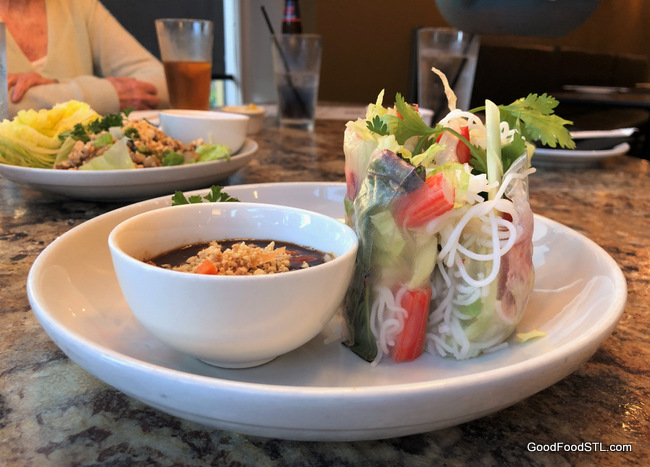 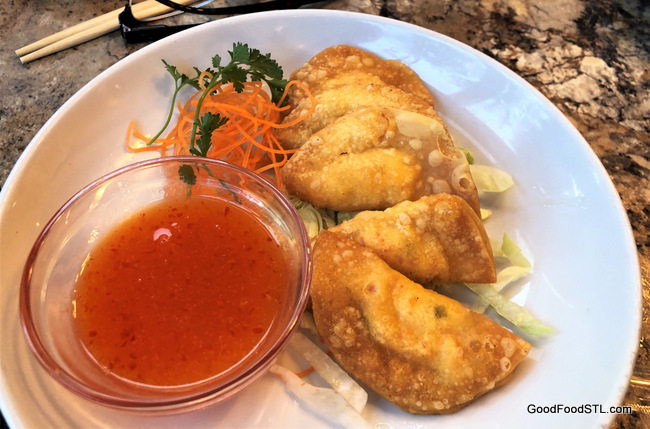 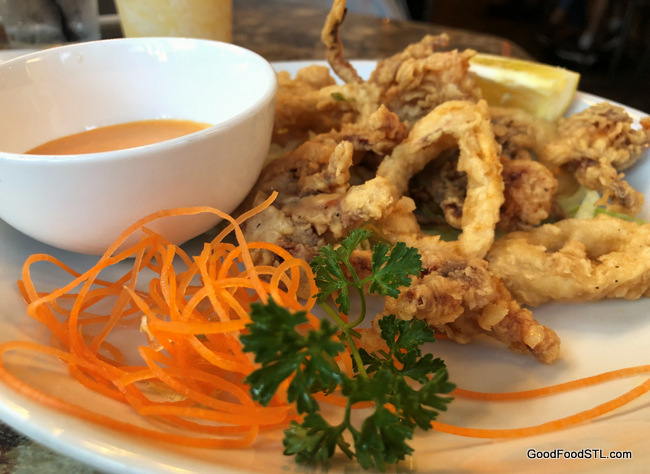 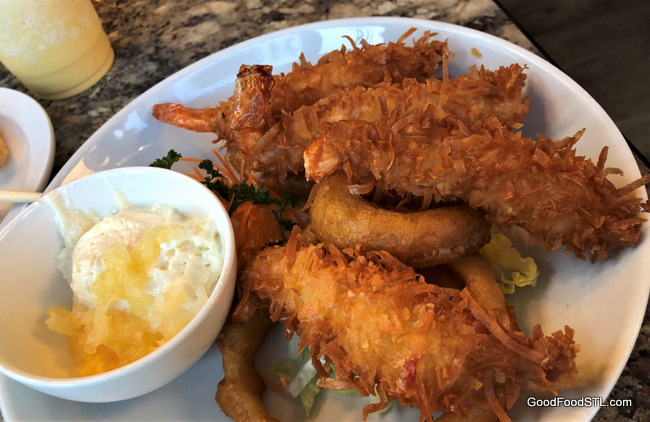 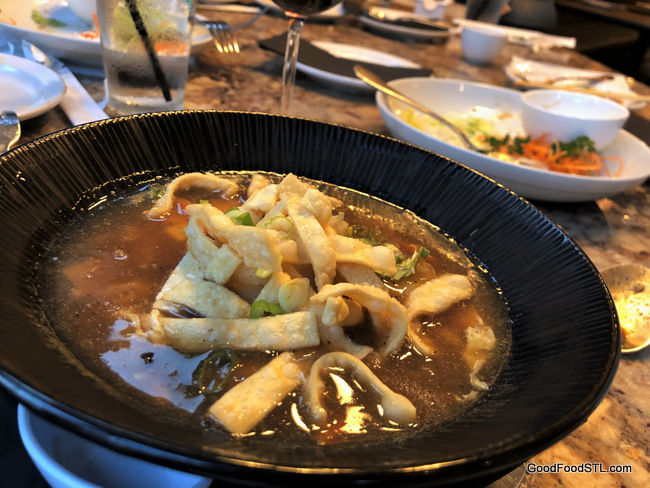 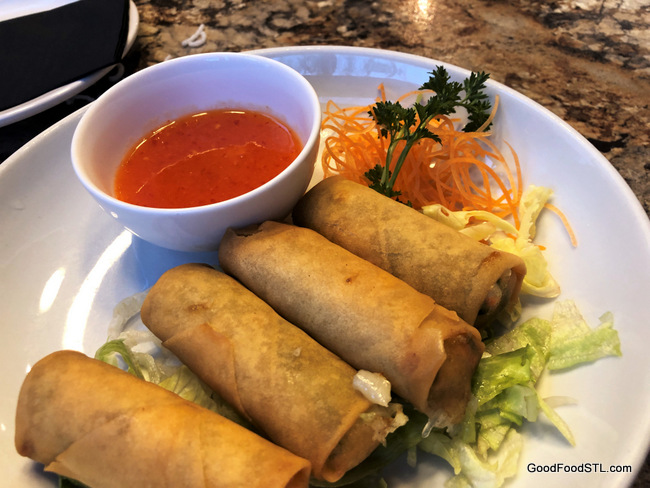 When the Bill Came!!!

Our group always splits the tab evenly among ourselves—which servers always love to deal with. When our individual bills came, we were shocked! For the 5 of us (with appetizers and drinks), the evening came to about $16 each!

We often pay twice that much for our monthly soiree. What’s more, the appetizers were ample and promptly delivered; the tables generously spaced and servers bemasked.

Put this one on your bingo card. 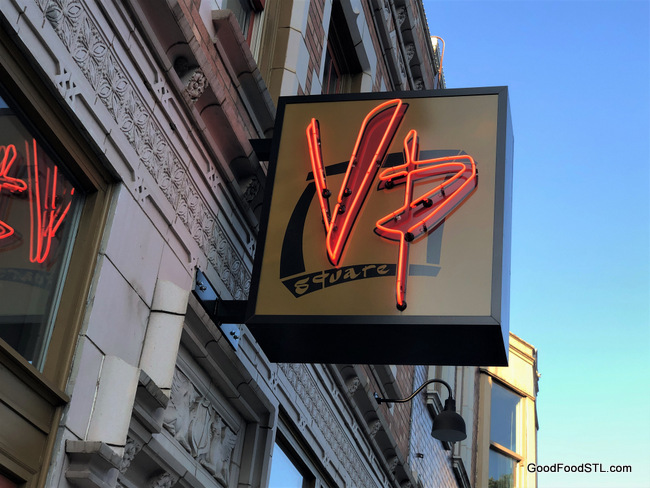 “Women Who Eat Out” agreed VP Square is a splendid addition to the Grand Avenue food strip.

Having money still in our pockets, we decided to drive farther down Grand to Ted Drewes. I especially enjoy their fresh peach ice cream this time of the year. Unlike their flagship spot on Chippewa, they are not as crowded. I was saddened to learn, that they are closing this weekend until next summer.

My server explained that the student employees were going back to school. Happily, the Chippewas location will maintain their regular schedule. My friends, Suzi and Butch, are moving to Ashland, Oregon, home of a famed Shakespeare festival, quaint wineries and looming mountain ranges. (Hmm. . . St. Louis has 2 out of 3 of those; not bad for the Midwest.) For their “Final Meal” before hitting the road, the couple picked Banh Mi So #1, a hidden jewel on South Grand, with a green awning and a neon sign that reads: “Best Spring Rolls in St. Louis.” I’ve eaten at the storefront restaurant so often, that one of the menu items is named the Carnahan Roll. (See item above: 03 Goi Cuon). Imagine how many hundreds of those spring rolls our family has eaten to achieve that distinction.

A Mom and Pop Shop

This is a mom and pop operation, or maybe I should say a grandma and grandpa operation. Owner Thomas Truong is my age, but still grows herbs in the backyard and serves tables while his wife, Lynn, cooks up incredibly delicious food from their homeland. Their phenomenal pho, (pronounced fuh by most Vietnamese and foe by locals), is a blend of bone-flavored broth and fresh vegetables, a combination that’s good for what ails you.

The irresistible banh mi, (meaning sandwich), is the inspiration for the restaurant’s name. Translated it means: “No. 1 Sandwich.” Their double meatball version is my favorite sandwich on the planet, next to maybe a BLT. I usually split it with someone at the table with whom I want to share my love of this culinary masterpiece swaddled in a fresh, soft-centered, French baguette.

The sandwich reflects the century-long occupation of Vietnam by the French and the frequent mashup of the two food cultures. Here’s a photo of my attempt to duplicate a bahn mi for a farm lunch. They weren’t as good as Chef Lynn’s, but not bad for my first try. Tilapia Spring Rolls are a signature item at Banh Mi So.  I’ve never seen them on any other menu. Crispy chunks of fish, vegetables and noodles are rolled up in thin rice paper wrappers and served with the house dipping sauce. If I could, I’d give a Michelin star to the kitchen for these seductive little gems alone. I sometimes order one of the bun dishes, a noodle, vegetable, meat medley that’s fun to eat with chopsticks. You might call it a “entry level” dish for someone who’s not yet sure about Vietnamese cuisine. This time I went with the Salmon Curry, a mild medley of salmon pieces and onion served over rice. Chef Lynn Truong in the kitchen. I’m amazed at the delicacy and brilliance of her cooking. Everything is chopped just so, sauces perfectly blended, and dishes delightfully presented.

I buy the house sauce (nuoc mam) by the bottle and it commands a place of respect among my other refrigerator condiments. Anytime I want to spike the flavor of a salad dressing, a sauce or casserole, I add a bit of Chef Lynn’s nuoc mam. Last night the broccoli benefited from a jolt.

Hanging on the wall are two photos, that include the Truong family along with my grandson, Andrew, and me; another is of Robin and Sen. Claire McCaskill. All were taken years ago so you might not recognize me; I was younger and thinner at the time. 🙂 When prompted, Thomas will tell fascinating stories of his time as a French professor and later a parachute jumper in the South Vietnamese army. Without my asking, he always remembers to bring me a side of peanut sauce. The carryout business is brisk at Banh Mi So and the clientele diverse. The restaurant was first opened for business in 1994, making next year their 25th anniversary in the same location.

When we finished our meal, I said to my friends, “Ted Drewes, anyone?” Smiles around the table. The frozen custard hotspot is just two blocks down the street on South Grand. We drove into the darkened parking lot and paused. Drats! The place was closed for the season. I waved goodbye to my friends and suggested that a return to St. Louis for a banh mi and a Ted Drewes custard would be well worth the effort.