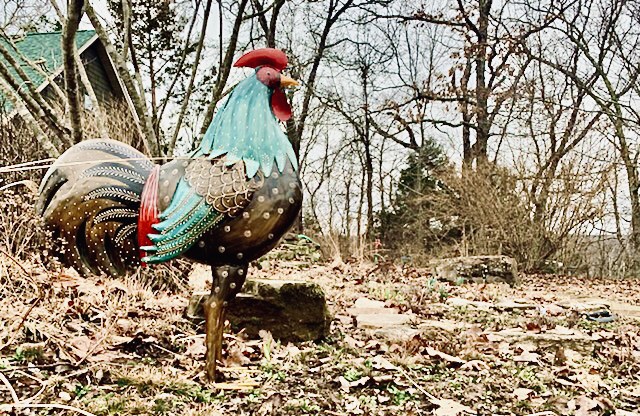 The Chicken Has Landed!!

Actually, it’s a rooster, an artsy piece from Gringo Jones’ sale on Shaw Blvd. Russ had spotted the colorful, 2-foot tall rooster and thought it would be a fun item for our farm rock garden. He suggested I stop by sometime and take a look.

Snow was still on the ground on the day I went. But the gracious clerk shoveled a path to the door. What’s more, he conducted me on a tour of the cavernous shop, that’s packed with arts and crafts from South of the Border.

As we followed the narrow path between the hundreds of decorative items, I showed him the photo that Russ had sent me. “Oh, yes,” he said, “I know exactly where that is.” 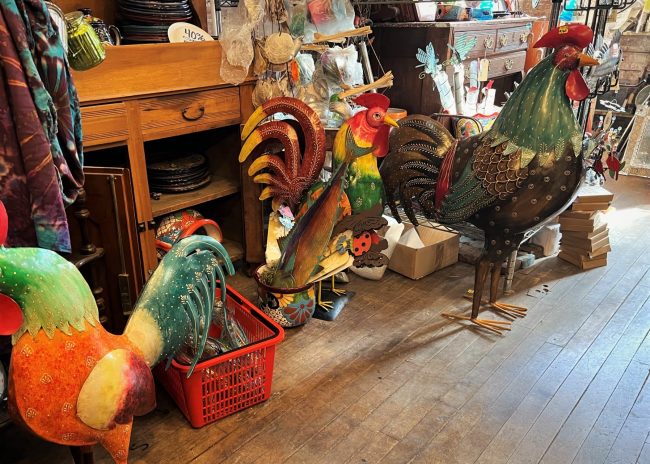 There he was the colorful rooster, undoubtedly awaiting my arrival.

Not wanting to lug the oversized rooster back home, I sent Russ to pick it up. He passed the bird off to Andrew, who took it to the farm and settled it in amongst the rocks and soon to be spring flowers.

I’m hoping the rooster will look fierce enough to ward off deer and other varmints. We named him Kung Pao, though I was tempted to dub him Foghorn Leghorn, in memory of one of my favorite cartoon characters. 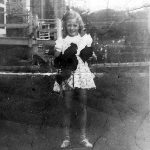 Petey poses for a photo in the backyard along with me and a Bantam rooster.

I might note that this is not my first chicken. There was Petey. When I was a kid, I got a baby chick on Easter that grew up to be a stately Rhode Island Red, but mean as a snake. He loved to peck your hand with his sharp beak.

No Longer Cock of the Walk

Well, Petey chased the mailman off the porch one time too many. When the postman threatened not to deliver the mail, either Petey or the postman had to go.

Petey spend his remaining days on a local farm where he happily discovered his own kind. It was for the best.

Kung Pao will not crow or peck. He poses no threat to the Fed Ex guy. I’m hoping his stern demeanor will fend off garden intruders. We’ll see. 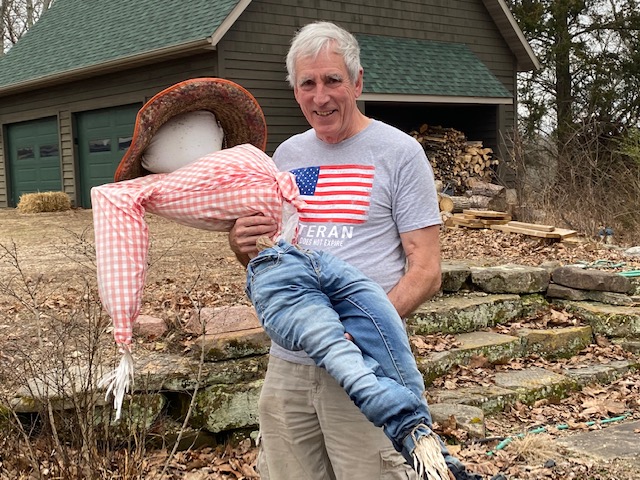 My friend, Robert, takes the scarecrow away for needed repairs and a new spring wardrobe.