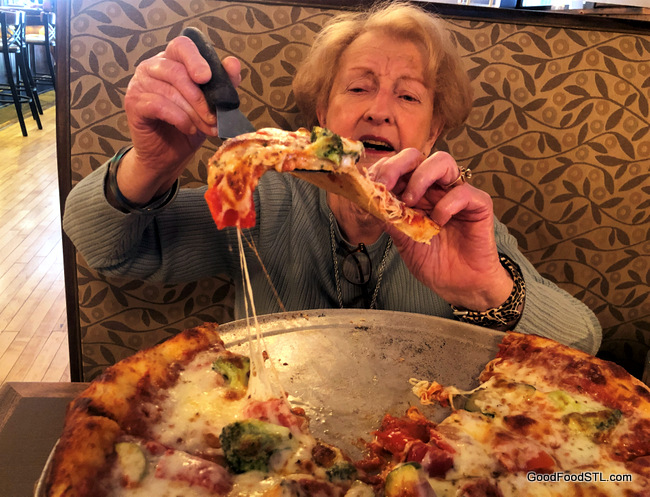 I love it when the cheese stretches from the pan and has to be urged to your plate with a little help from your fingers.

If you and your COVID-crazed friends can’t decide which kind of food they want to eat, you might consider Anthonino’s Taverna on The Hill. There’s seating on the street and well-spaced booths and tables indoors.

After much indecision, Cyndy and I each ordered a House Salad and split a Veggie Pizza, that comes topped with broccoli, zucchini, mushrooms, peppers, and Mozzarella. (Eating a veggie pizza makes you feel incredibly virtuous.) 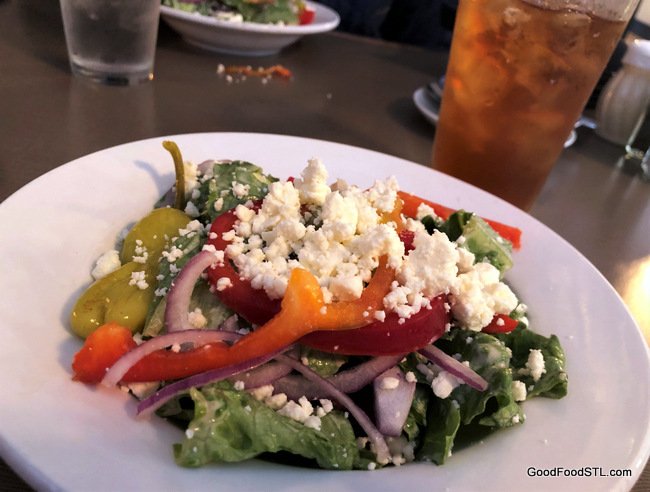 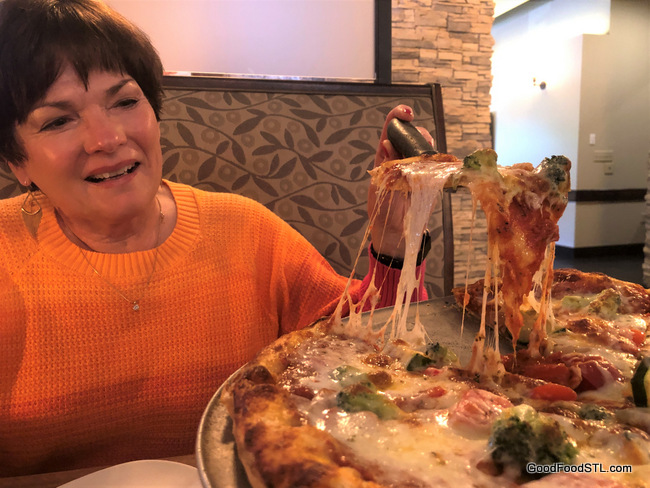 I thought I was a thin-crust gal until I discovered Anthonino’s medium-crust. It’s divine and as good as any I’ve ever had—anywhere!

Pizza is served on an elevated rack, which makes for a whimsical presentation, as well as extra space on the table. It’s fun to hoist a slice from the tray and watch the cheese cling and swirl as you wag it onto your plate—or palate—leaving a trail of toppings behind. 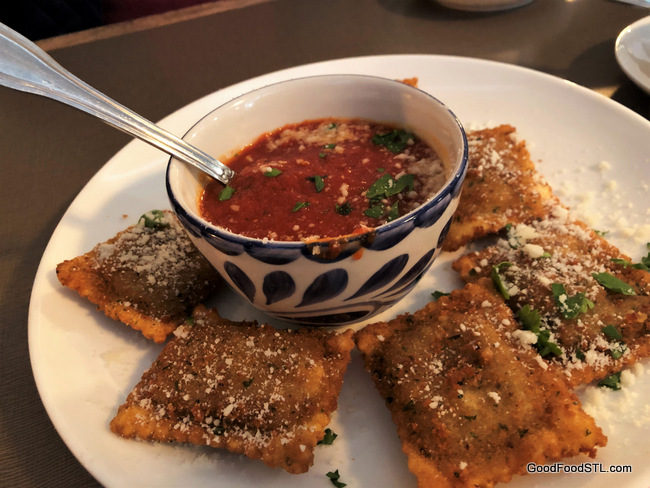 There’s so many reasons to return to Anthonino’s. I’ve yet to explore the Greek side of the menu, for heaven’s sake!—the saganaki, spanakopita, gyro, dolmades (stuffed grape leaves). But then, I’d have to pass up the pizza. So many goodies, so little space on my plate. 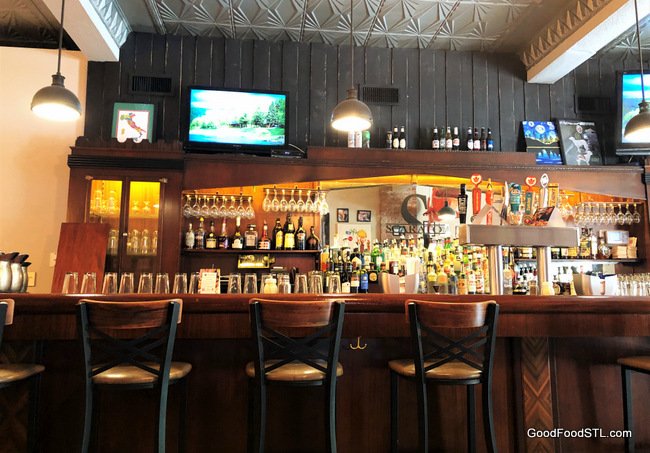 The Brothers Scarato have modernized without diminishing the rustic charm of the old tavern. In addition to the original bar, the hardwood floors, exposed brick, and pressed-tin ceiling are original.

A Visit by Guy Fieri of “Diners, Drive-Ins and Dives” 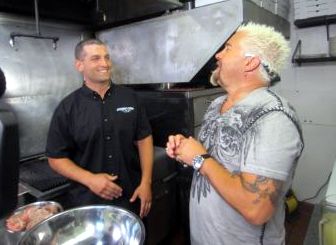 Customers swarmed the place making it necessary to expand the dining area.

Since then more accolades have poured in: Best Pizza on The Hill; Best Toasted Ravioli from RFT for 5 years running; and Best Italian Restaurant in St. Louis from RFT. 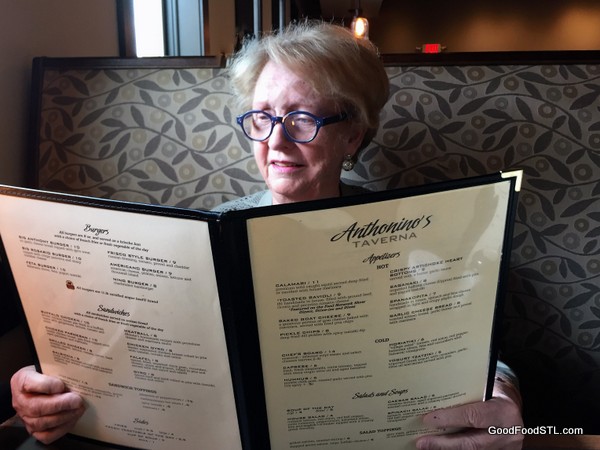 The oversized menu and comfortable booths are an invitation to fine dining.

On to DiGregorio’s Italian Grocery 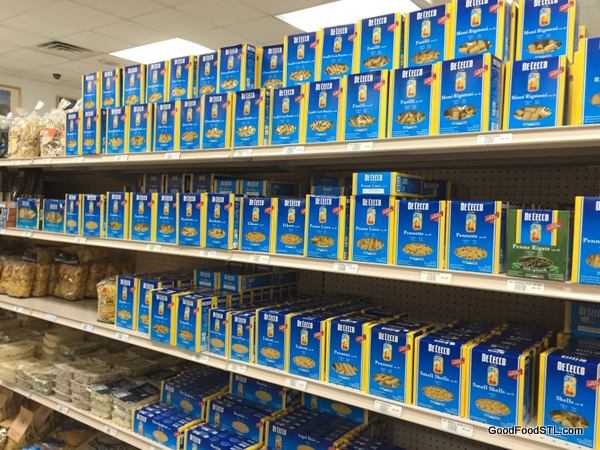 After lunch at Anthonino’s, I had a most enjoyable swirl through DiGregorio’s Italian Grocery. It’s a museum of cheeses, meats, and pastas. I loaded up on their pizza dough balls, sauce, pepperoni, Italian sausage, and Mozzarella for our long overdue cookout at the farm this weekend. As usual, I also got a few things I hadn’t intended to buy.

It’s summer and the grills and smokers in the backyards across the country are firing up.  But local grill masters have lots of competition from award-winning BBQ joints like Pappy’s, Bogart’s, Vernon’s, the Capitalist Pig, Hendrick’s, Salt and Smoke and The Shaved Duck.  St. Louis ranks up there with Memphis, the Carolinas, Kansas City and Austin, when it comes to finger lickin’ barbecue.

Duck into The Shaved Duck for BBQ

I had lunch recently at one of the city’s premier porcine parlors: The Shaved Duck.  The name reminded me of a place I ate in Beijing more than thirty years ago. They served duck parts exclusively, from feet to feathers.  Well, maybe not the feathers, but nothing much was wasted.  It was located near a hospital and called The Sick Duck, which showed a sense of humor even during those bleak times in China.

While this St. Louis BBQ joint at the corner of Virginia and Pestalozzi may have a ducky name, their menu is mainstream American rustic.  Though I noticed, that true to their name, they had several duck items on the menu: a duck confit with Mozzarella and a sweet bourbon drizzle.  Another was poached in duck fat and served over greens in cider molasses. The Tower Grove location, that was once a neighborhood grocery store, now serves a more far reaching clientele. The doorway to good comfort food Our server was unusually enthusiastic about the offerings and suggested we try the smothered fries.

“Smothered in what?” I asked.

We were convinced.  For an entree, my friend, Laura, got the Baby Back Ribs, house rubbed and smoked with cherry wood (for color) and glazed.  I went with the much-touted meatloaf with root beer glaze, though the Shrimp and Grits was calling my name.  As it turned out, the smothered fries could have been a meal by itself. With little hope of cleaning our plates, we agreed to take home any leftovers.  We soldiered on, happily engaged in culinary research.

As we watched the place fill up, we felt fortunate to be there for lunch on a weekday rather than a Friday or Saturday, when it’s best to make a reservation. Outside seating is available now, but indoors there’s only 15 tables, holding around 50 diners, plus the bar waiting area. Recalibrate your palate for these wickedly delicious ribs. The small but efficient bar offers an array of local and national craft beers.

Alastair “Ally” Nisbet, owner of the Scottish Arms, refurbished the one-time Tower Grove grocery store back in 2008. Since then he’s gained both area and national acclaim.  In 2012 Guy Fieri of Diners, Drive-Ins and Dives showed up to film the kitchen in action.  A couple years late the place was featured in Johnny Friggit’s 100 Best BBQ Restaurants in America and gained top award for their Burnt Ends.

On The Shaved Duck website Nisbet writes, “We cut no corners and we love what we do.”  Then he leaves us with with this mission statement: “Good Folk, Fresh BBQ and Honest, Soulful Food.”  In keeping with that goal, the kitchen cooks from scratch, even making their own bacon.  And they fire their ovens with cherry and hickory woods for just the right color and unique smoky flavor. With so many dishes yet to try, I foresee several more visits in the immediate future. Guy Fieri during his 2012 filming for Diners, Drive-Ins and Dives.  See clips of show here and here.