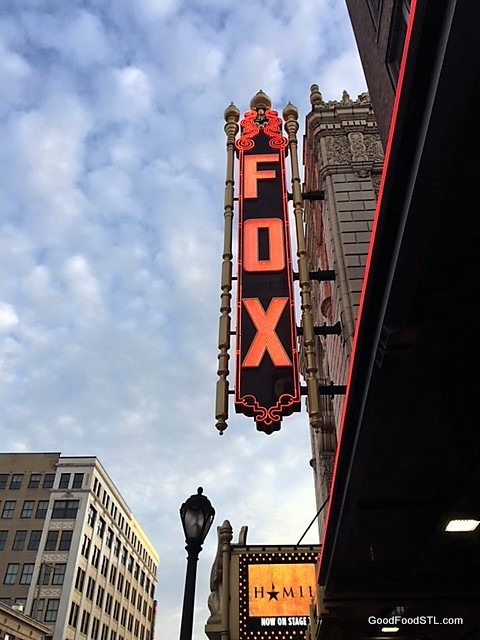 The Fox Theater on N. Grand easily ranks among the city’s greatest architectural splendors. If you’ve not been there, put it on your bucket list. If it’s been awhile since you went to a show, think about a matinee or evening performance. 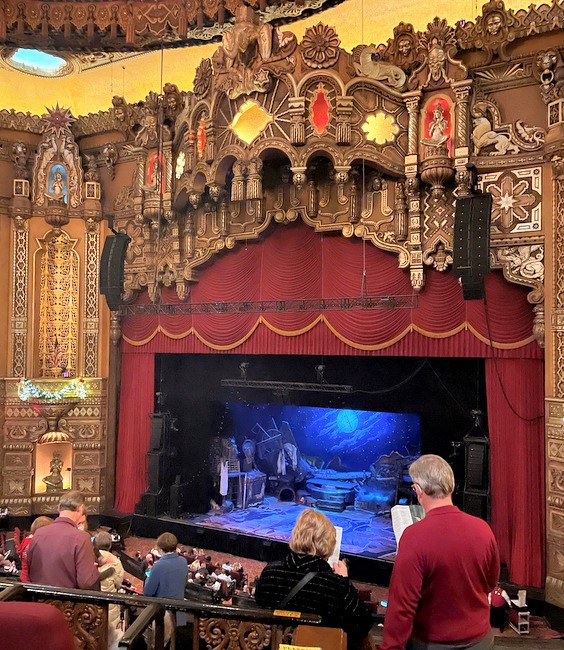 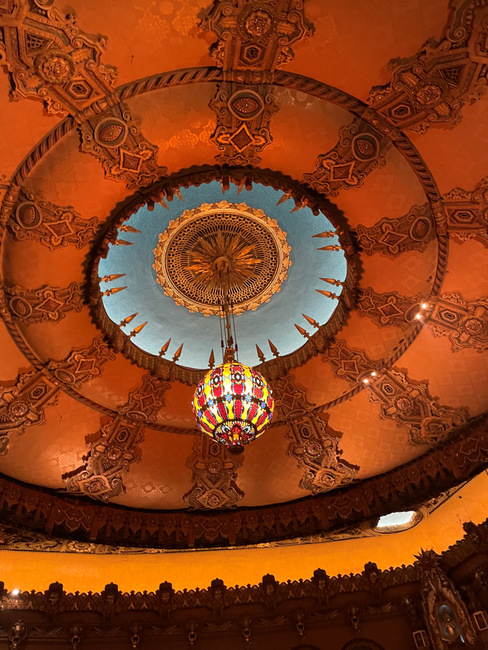 Ceiling at The Fox theater

Whenever I’m with friends at The Fox, someone will invariably scan the ornate walls, columns and ceilings and inquire: “I wonder what style this is?” Most conclude it’s some Far Eastern exotic design.

I finally looked online and found that the unconventional motif is a little more complex than that. The style is referred to as Siamese Byzantine, a melding of Far Eastern, Moorish, and Egyptian. William Fox, the original theater owner, gave credit to his wife for the interior design. She travelled abroad extensively to find the art work, he said. 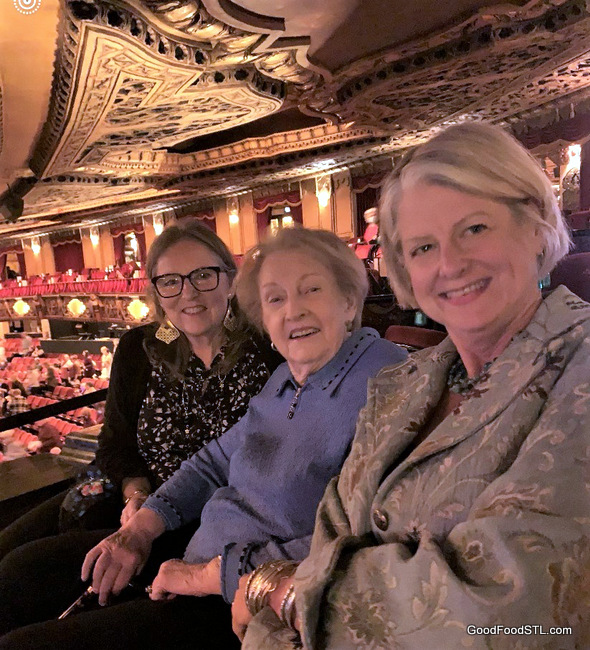 Tickets or tours of The Fox make a great gift. Dazzle your out-of-town guests with a behind the scenes look at the theater during a Tuesday, Thursday or Saturday tour.

I’ve not been to The Fox for two-COVID years, but recently I saw Alton Brown, the Food Network guru, and the final showing of My Fair Lady. Upcoming shows include Hairspray, Hamilton, and The Lion King.

I’d been given box tickets by someone unable to use them for My Fair Lady. What a delight, especially when it came with access to The Fox Club restaurant.

Eating at the Fox or Nearby 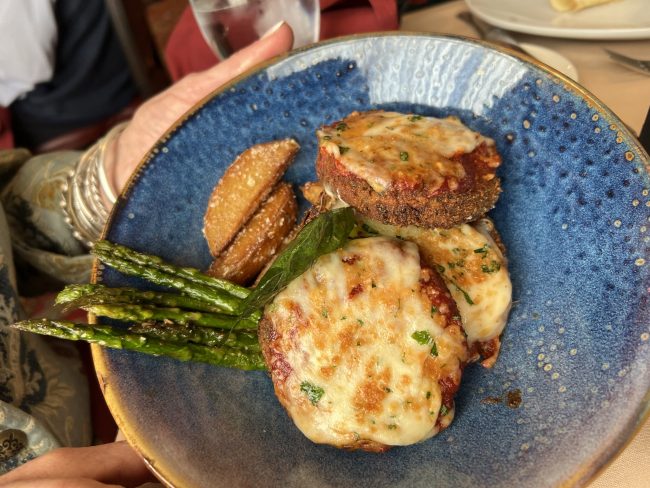 Eggplant Parmesan and Marinara Sauce, with vegetable of the day, which happened to be asparagus.

While the food at The Fox is splendid (love that eggplant parm shown above), eating at one of the nearby restaurants is also a good option: Fountain on Locust; Bulrush, Pappy’s Smokehouse, Jazz at the Bistro, to name a few. 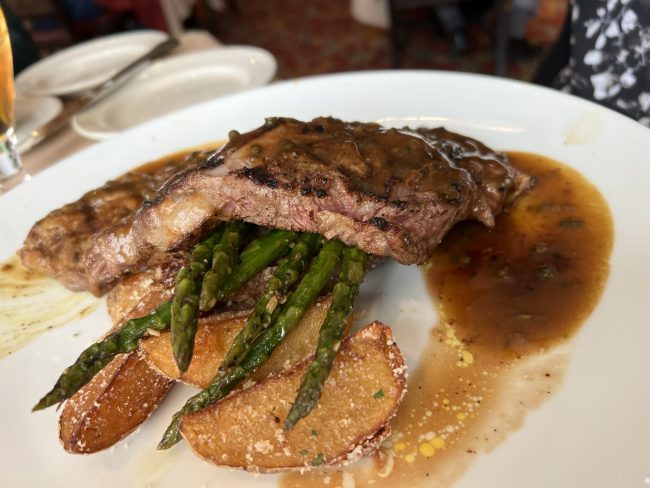 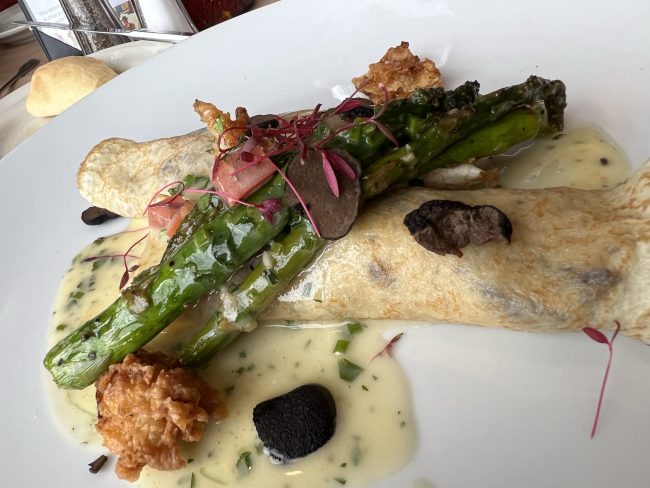 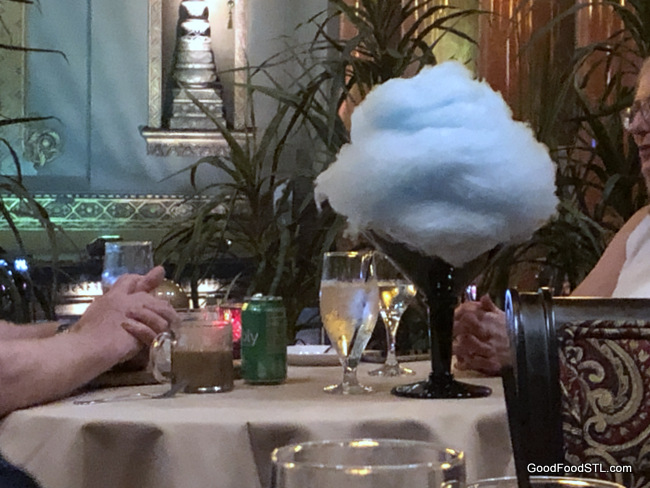 A cloud of cotton candy (at another table) befits a celebration at the old theater.