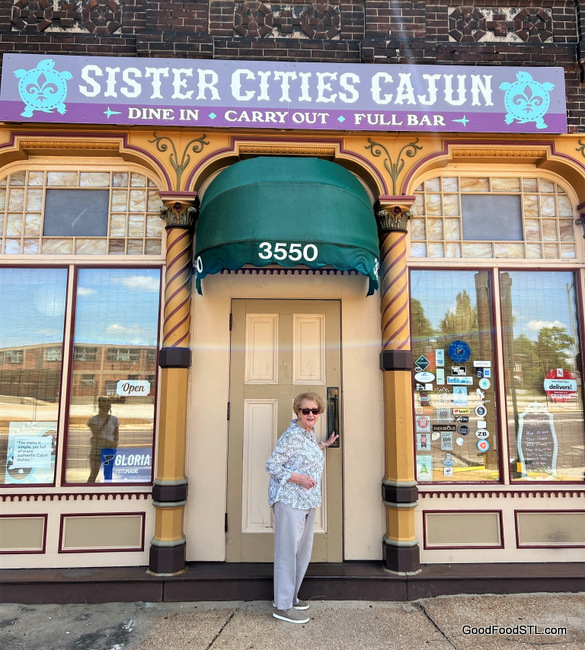 No, I’m not in NOLA. But Sister Cities Cajun is the next best thing. The restaurant name recognizes the French heritage of the two cities.

Yes, there’s a difference in Cajun and Creole cuisine. Though we often use the terms interchangeably, there are some traditional variations worth noting.

Here’s a few, that will help the next time you face a Louisiana-style menu.

It Comes Down to History, Region & Ingredients

History: Creole cuisine came with the French. But the cooking style was a blend of the many cultures to settle in the New Orleans area. Cajun was a more humble variation from the bayou region—the downhome, comfort food of its time.

Region: Creole dishes were considered “city food,” while Cajun cuisine was thought of as “country food.” Creole cooks were more likely to use such upscale ingredients as okra, tomatoes, butter, cayenne pepper, and filé powder made from ground sassafras leaves. Creole cooks even imported canned tomatoes from Sicily.

Cajuns used what was on hand for their stews, but not tomatoes. Ingredients were grown locally, or hunted.

Spices: Paprika was used more liberally in Creole dishes, along with basil, celery seed and white peppers. For some reason, neither cuisine included carrots in the so-called “trinity” of ingredients: onion, green peppers, and celery.

The Roux: That’s the mixture of flour and fat used to make the dark thickening sauce. Creole recipes used butter: Cajun made do with oil or lard. 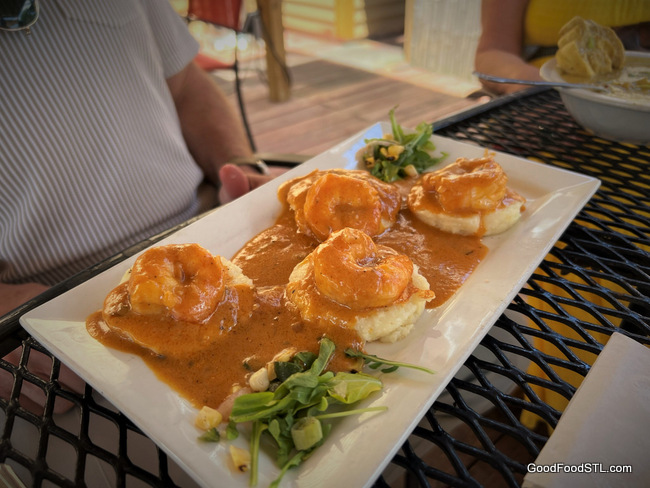 Enlightened by all this knowledge, I headed off for lunch with Russ, Deb, Andrew, and Jacci. We met up at Sister Cities Cajun, the Louisiana restaurant on Broadway just south of the Brewery.

“What Are You Getting, Grandma?”

“I want a Dirty Gertie,” I said from having previously scanned the on line entrees.

“Hmm . . . that sounds like the name of a country-western band.”

“That would be the Dixie Chicks,” he said.

“Then what is “Dirty Gertie?” I asked.

He hunched his shoulders and returned to his Hoisin Chicken Bowl, as I googled the name that had popped into my head. Turns out Dirty Gertie was a 1940’s film. It’s amazing how the mind stores little bits of useless information—though sometimes in a mislabeled “file folder.” 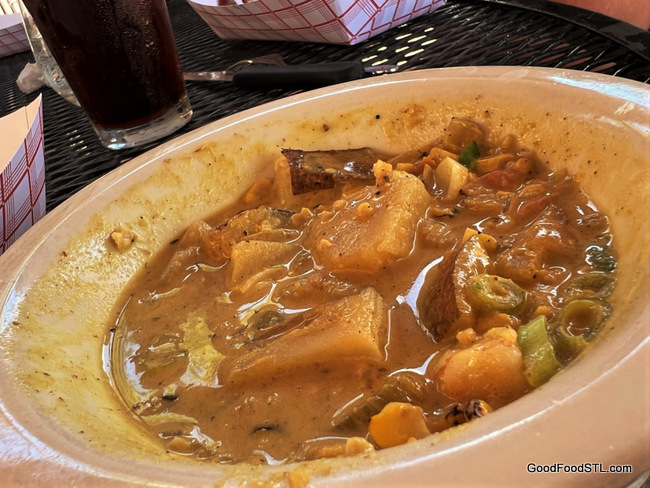 Curried Chicken and Corn Chowder was a table favorite. 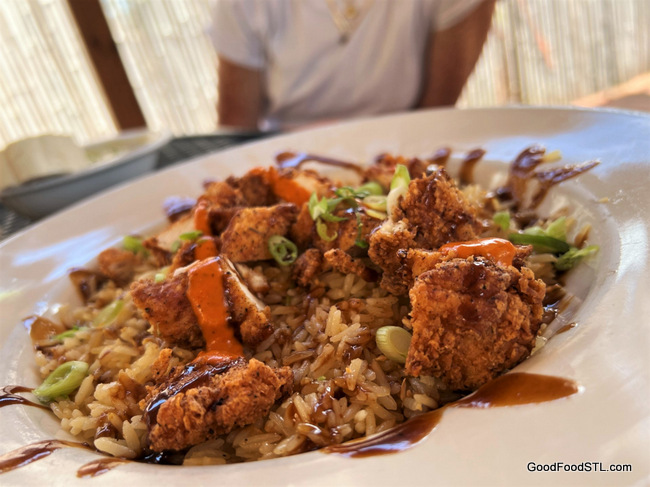 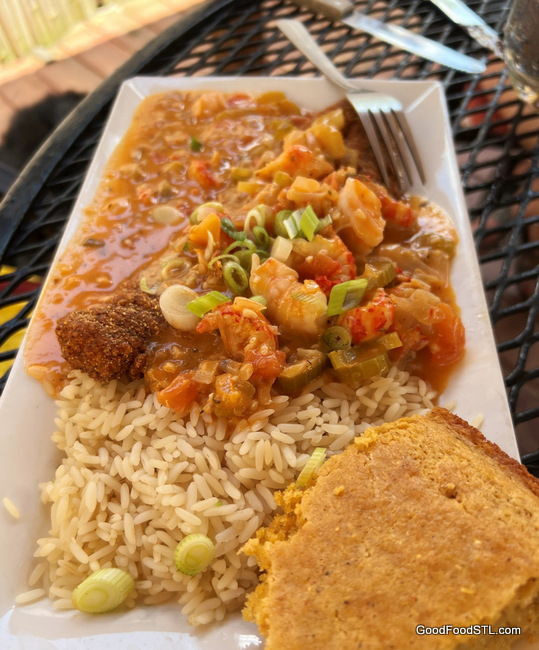 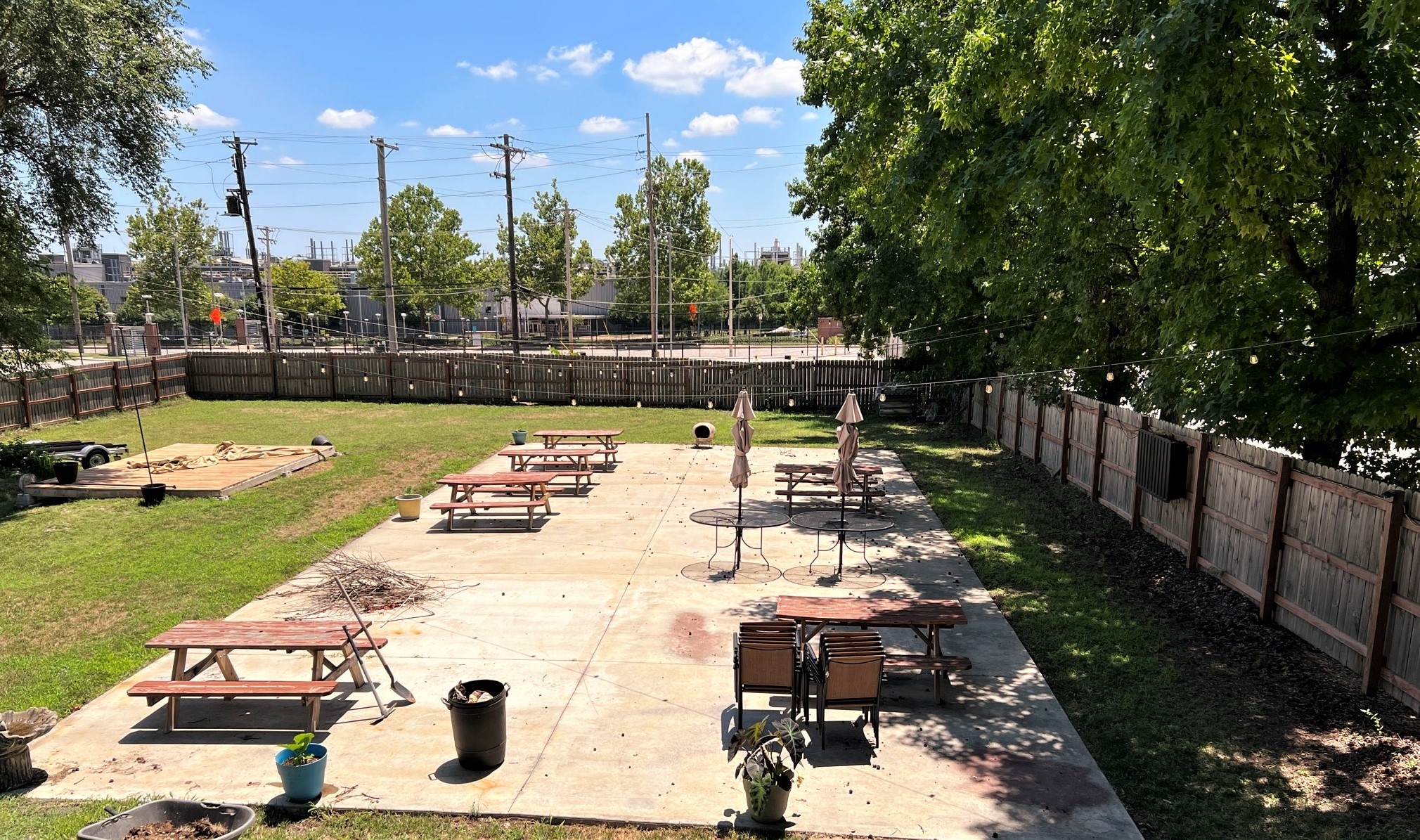 Patio for patrons and pooches 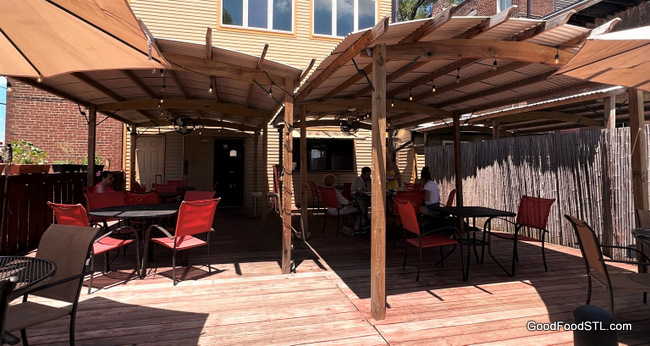 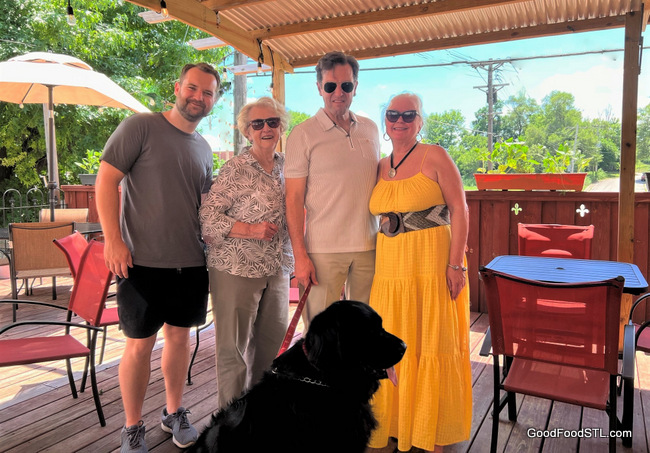 Andrew, me, Russ, Deb, and their Newfoundland, Bella. Perfect day for an outing for all. If ever there’s a Creole hall of fame, Chef Austin Leslie will surely be in it. The NOLA chef is seen here displaying his signature riverboat cap, crab-shaped necklace, and infectious smile.

“The King of Fried Chicken” is what they called Austin Leslie, owner of Chez Helene’s in New Orleans during the 70s and inspiration of the short-run TV show “Frank’s Place.” One of his early cookbooks had just several dozen recipes, but is now considered a collectors’ item, as the Amazon price attests. They’re simple recipes—though he didn’t always give the same ingredients. But each came with some unique twists from the now deceased, but highly-acclaimed chef.

On line, I found his take on cornbread, potato salad, fried chicken, stuffed peppers, crab meat salad, and jambalaya. The cornbread was not too unlike what’s printed on the yellow cornmeal package, which is actually, pretty good.

But the chicken recipe gets quirky. While still in the skillet, chicken pieces are poked several times with a two-pronged fork to allow more juiciness to reach the bone. Then he’d take the chicken from the skillet and squeeze it with tongs to remove the excess fat. Chef Leslie’s fried chicken was always finished off with a persillade of parsley and garlic and a few dill pickles.

His treatment of stuffed peppers was unorthodox, too. He’d bake a bread-shrimp stuffing, let it cool in the fridge, then put it inside cooked green peppers with a dab of butter, and baked the dish some more. Austin’s potato salad has the usual ingredients: celery, eggs, onions, mustard, and seasonings, but no pickles or mayo! I gave it a try, using oil instead of mayo. It was good, but I missed the mayo.

“And he was good, damn good.

You couldn’t fry a chicken better than Austin.

You couldn’t stuff a pepper better than Austin Leslie.”