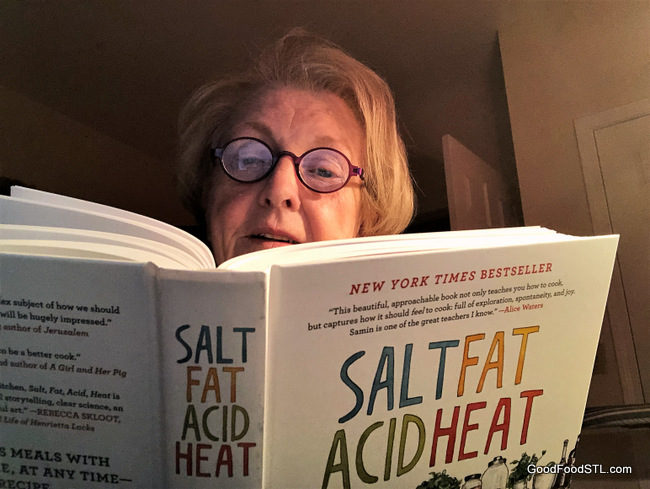 Reading maybe one of the healthiest things we can do right now.

While stuck at home, avoiding the Corona virus, I’ve made some observations. Being stranded indoors brings some long-overlooked things into focus.

For instance, I noticed spots on my carpet, that I’d not seen before. Files stacked on my desk for weeks, obscuring my window view, began to annoy me. (Come to think of it, those windows could stand a good washing.) I’ve been so bored, I even took an inventory of my canned goods. The task turned out to be the inspiration for today’s scribblings about cans and spices. Those space hogs that fill our cabinets most of the time come in quite handy during pandemics.

Yes, thank the French emperor for all those cans. In 1795, he offered 12,000 francs to anyone able to keep his military food supply from spoiling. The winner, Chef Nichola Appert, invented the process of canning by packing meat and poultry into glass bottles. After corking they were submerged in boiling water. The process is still much the same today.


So What’s In Your Kitchen Cabinets?

A survey made by the Can Manufacturers Institute showed:

After reading that, I headed to the kitchen to see how close to the average I came. (But first, I stopped at an air vent to remove the accumulated dust unnoticed till now.)

Here’s What I Found

As to cereals, I defy the six-box average; I have a single box of granola. In canned goods, I’m slightly above the norm. I have very few of the favorite canned items listed above. But I’m well stocked with tomatoes and soups, as well as such goofy things as garbanzo beans and coconut milk.

But spices! Wow! I’m way out of line with 3 to 4 times more than most kitchens. I’ve been using more of them recently to spice up things and relieve the monotony of cabin fever. Some spices, such as turmeric, are even anti-inflammatory. 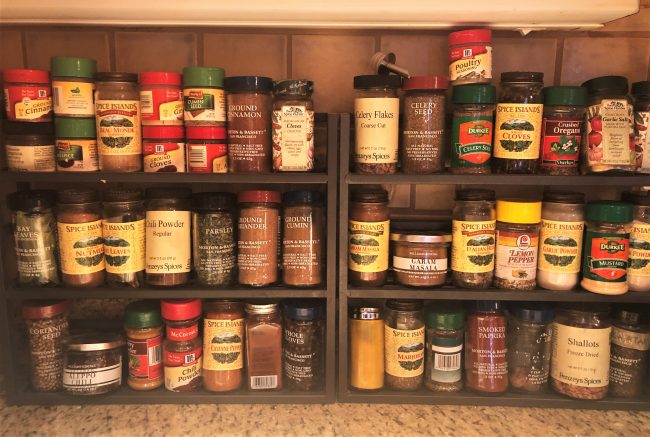 Less than half of my spices.

Storing All Those Cans and Spices 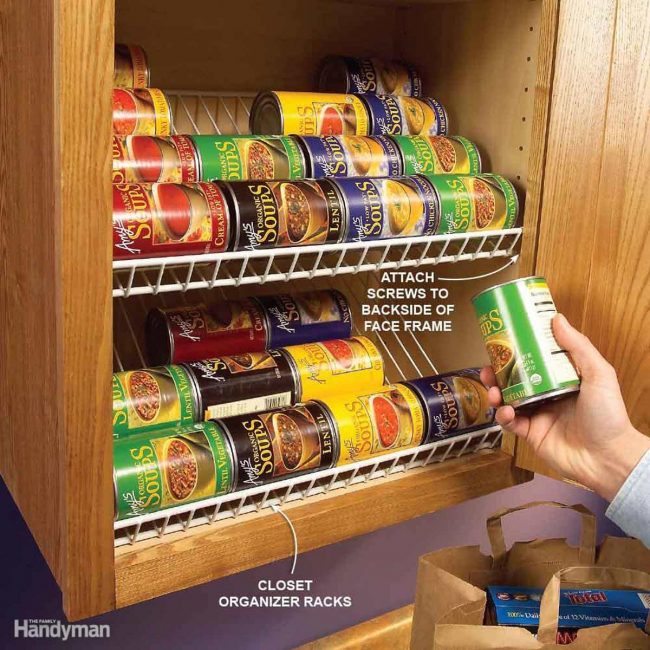 This novel idea comes from Handyman and is made from closet organizer racks.

As to the farm, I’m thinking this skinny rolling shelf (shown below), that fits between the refrigerator and wall, is just what I need for canned items and spices. See how to build one at Classy Clutter.

What a novel idea!

With nothing I have to do and no place I have to go, my mind is a-buzz with books to read and home improvements to commence. You know the old saying, “When life gives you lemons, make lemonade.” (Or, at least, a cup of hot tea.)

At a time when we’re unable to get a handle on our political, economic, environmental and physical destiny, it’s good to be in charge somewhere, even if it’s only in the kitchen. Stay well.