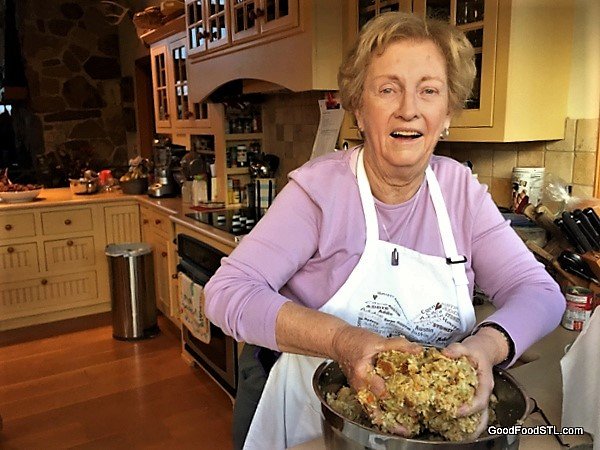 In this Thanksgiving morning photo—taken a few years ago—I’m wrist-deep in turkey dressing.

It’s not the turkey or the mashed potatoes or the pumpkin pie, that I look forward to each Thanksgiving. It’s the Cornbread-Sausage Stuffing. (It’s called “stuffing” when the bread-vegetable mix goes inside the turkey cavity, but “dressing” when it’s cooked in a baking dish.) I do both, because I make more dressing than fits into the turkey’s body and neck cavities. 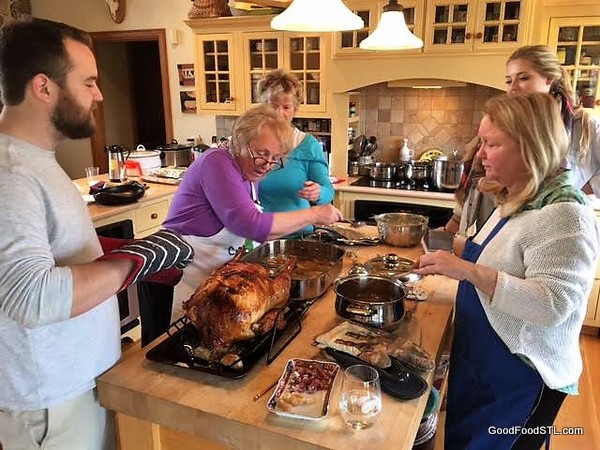 It “takes a village” to cook a Thanksgiving turkey.

The stuffing mixture takes on a heavenly aroma after mingling several hours, amid sausage and poultry juices. When my  turkey comes out of the oven each Thanksgiving, the  “Kitchen hawks” dive, fork first, into the stuffing before the bird is ever dismantled. I can’t blame them; I’m their leader! 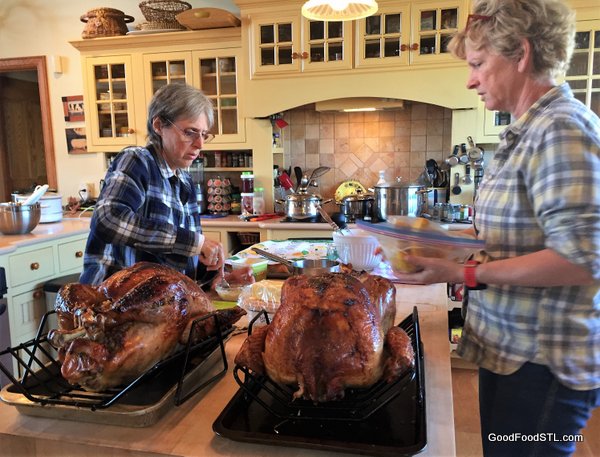 I settled on a stuffing recipe more than 40 years ago. It was given to me by word of mouth from my hairdresser. I wrote it down on the back of my electric bill, as she backcombed my fashionable beehive into shape. I’ve made it on T-Day ever since.

Bread. But Which Bread?

When it comes to the bread, I use part Pepperidge Farm cornbread dressing and part Herb, along with some sliced, oven-toasted white bread. My Internet search suggested Arnold’s Country Classic as being the best suited for turkey dressing. It can be found at Target and Walmart, so I read. I plan to check that out.

I recall my father and I preparing the bread as my mother prepared the turkey. We toasted the slices in the oven. Our little, two-piece toaster with the sides that flopped down to release the bread was too slow.

Invariable, one side of the bread would get “over-toasted”—a euphemism for burnt. When that happened, it was our job to scrape the blackened part into the sink. Today’s ovens, that come with a built-in timer and window, have lessened the chances of messing up the bread.

Or Wrap Your Thanksgiving into a Casserole

Sadly, I only eat stuffing once a year. Maybe that’s what makes it so special. There was a casserole back in the 60s, that included chunks of chicken, cream of chicken or mushroom soup, and packaged dressing, that came together in a baking dish simulating the taste of a Thanksgiving meal. 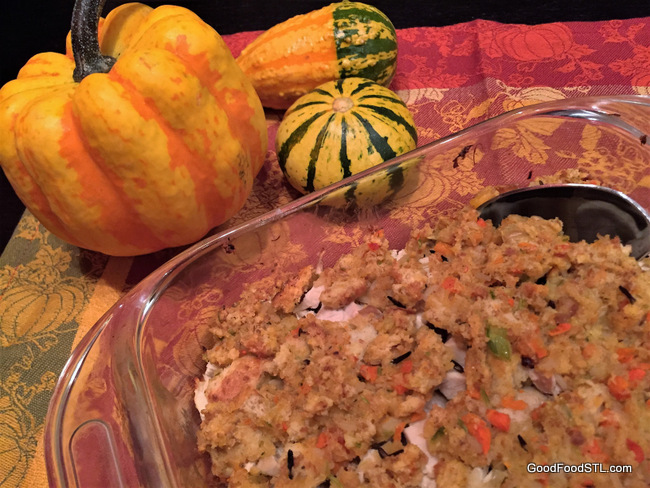 I came upon the old recipe recently at Just a Pinch website. I found it close to the one I used to make years ago. The dish calls for chicken breasts, but you could just as easily sub turkey medallions.

A Thanksgiving casserole is perfect for those not wanting to wrestle with a large, frosty bird. You get the flavors and textures of Thanksgiving all rolled into one. And possibly some leftovers. 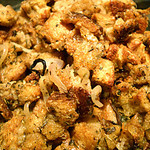 Every family has it's favorite dressing--this is ours .I've been enjoying it for 40 years.
Course Bread
Cuisine Thanksgiving