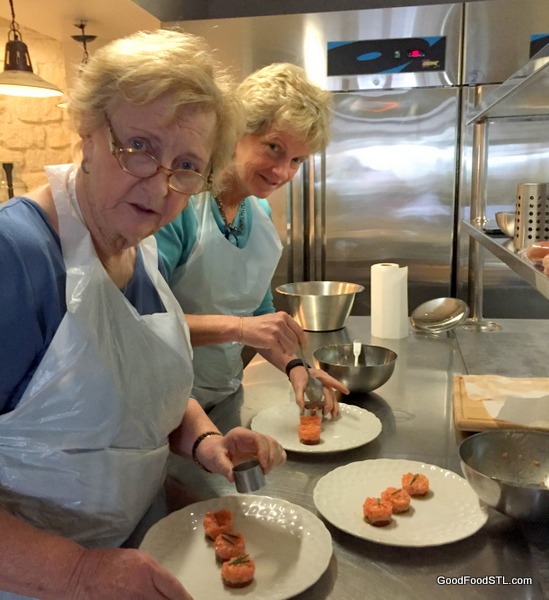 Robin and I making salmon tartare in a Parisian cooking class some years ago. (Deb was taking the photo.)

I keep a travel journal and occasionally I even re-read it. One such time was this week, when the ice and wind were whipping about outside my window. I pulled up to the fireplace with a cup of tea and re-lived my French cooking class.  Ahh . . . such fond and amusing memories.

Before leaving for Paris, I had signed up on line for a one-day cooking class along with Robin and Deb. Le Foodist came well recommended, had a nice website, and offered what I was looking for: a market tour and the preparation of a four-course meal.

The price seemed reasonable, too. Viola! A few clicks on line and the three of us were signed up for French cooking.

There were six in the class, plus the instructor, Chef Fred. I was unsure whether he had a last name; I never saw it anywhere. Having worked in corporate America before turning to professional cooking, his English was no problem. 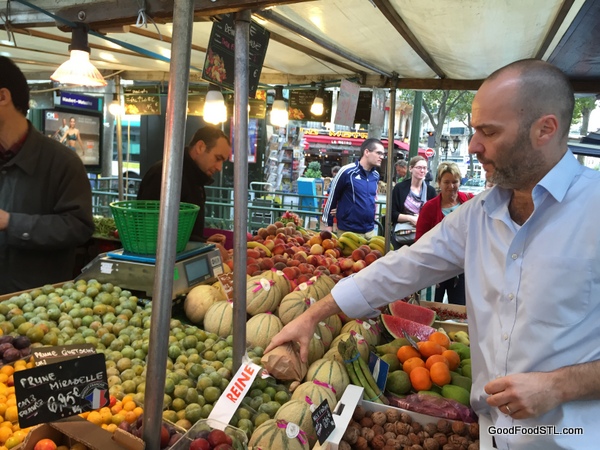 After coffee and croissants, Fred collected us like a mother hen would her brood and we followed him along the narrow streets to a sidewalk market.

We watched as Fred selected cheeses, fruits, and vegetables for our culinary adventure. Eventually, I wandered off and bought a scarf from a street vendor, who showed great patience, (and no little amusement), as I struggled to recall my high school French.

After “school,” when we passed the area, the day market was gone–-disappeared-–and the large corner had returned to pedestrian traffic. 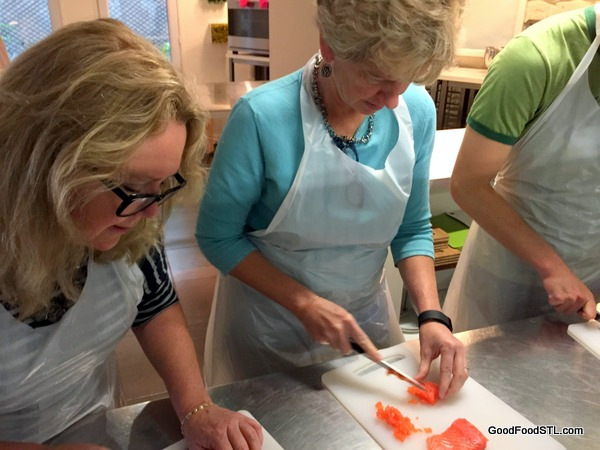 Deb and Robin slice salmon for the tartare appetizer.

Back at the kitchen, we divided into teams as Fred made assignments for cooking a lunch of Salmon Tartare, Coq au Vin, Potatoes au Robouch, Carrot/Turnip “balls,” and Peach Melba. There were no recipes; they would be emailed to us later, Fred said. For now, all instructions came from the Chef. 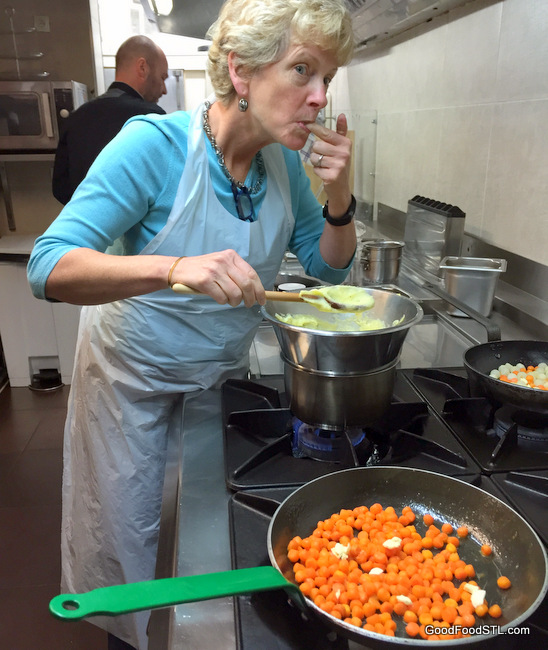 Robin sneaks a taste of potatoes before Chef Fred could see her.

The Class Will Come to Order

Half the class was attentive, orderly and given to following instructions. The other half was less so. Guess which half we were in? When my daughter-in-law observed that the carrots and turnips were being overcooked, Fred declared in a huff that they were just fine.

The two never agreed on the doneness of the vegetables. Personally, I lean toward overdone carrots, so Fred and I were on the same wave length there. But I wouldn’t admit it. After all, I have the family culinary honor to preserve.

Later, I noted that the consistency of the mashed potatoes was a bit gummy, as you can see in the photo below. Had I served them on Thanksgiving, Uncle Ned would have protested. I can hear him now: “What the hell’s wrong with the mashed potatoes?”

Fred said that his spuds were not gummy; they were pureed in a Robuchon fashion. Frankly, I think the French should stick to cooking fries and leave the mashed potatoes to us. 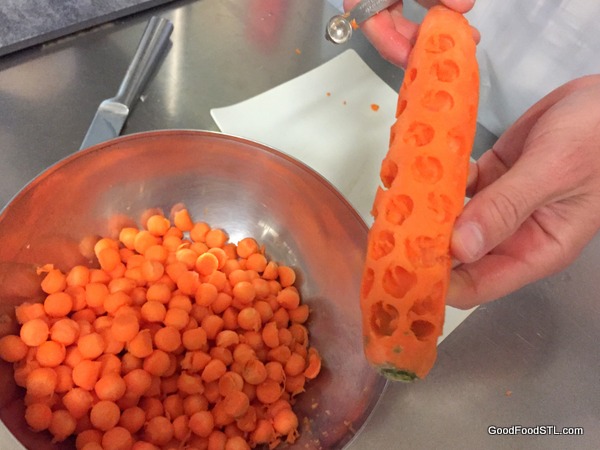 Robin and I worked on the glazed vegetables, that required scooping tiny balls from carrots and turnips. (I don’t think Chef Fred wanted to put us in charge of anything more advanced.)

I have since found the various-sized scopes that I bought in Paris. Now if I can just find the recipes that Fred sent.

The heirloom dessert, Peach Melba, was an 1892-creation of Chef Escoffier. Making the side of ice cream required splitting a vanilla pod lengthwise and using the raw bean. The poached peach was later nestled in a raspberry coulis along with the vanilla ice cream. Simple, but elegant. 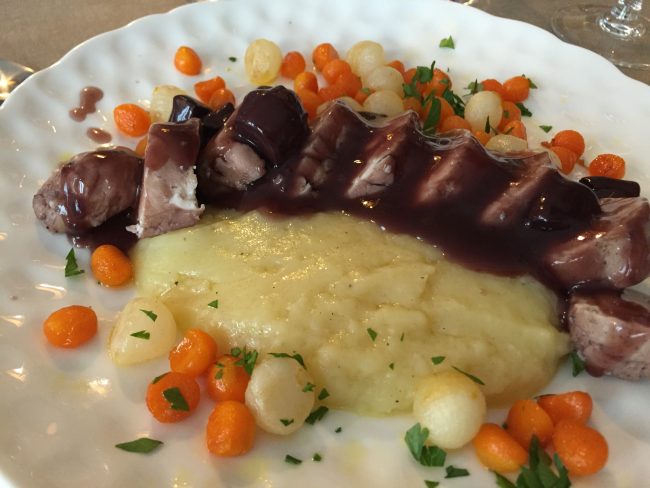 Coq au Vin with Potatoes alongside the Carrot and Turnip Balls, that I methodically carved out.

I learned something from my exchange with Fred. One must be the sole authority in one’s kitchen. Don’t take criticism from mouthy intruders, who saunter through your domain. If someone dares to suggest the “carrots are burned,” just look aghast and say, “No, they’re not. They’re over-braised—as I intended.” Or blame it on Robuchon. 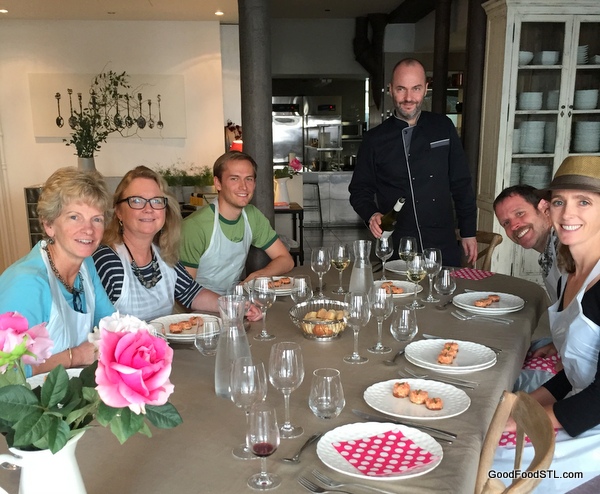 By All Means, YES!

Would I do it again! Certainly. But those plastic, disposable aprons would have to go. Despite Fred cutting corners on the aprons, he knew his stuff, was methodical, his kitchen spotless, and his stories mildly amusing. (Current website photos show cloth aprons emblazoned with the school name. Thanks, Fred!)

During our cooking venture, Chef Fred offered a timeout for a bit of wine, a culinary ceremony that Julia Child heartily endorsed. It was a fun and informative class, but I’m sure Fred is glad he doesn’t have three opinionated Carnahan women to deal with every day.