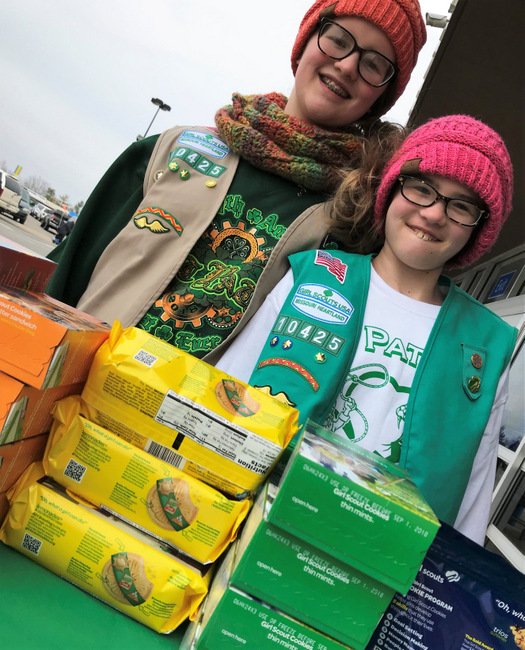 My great-nieces, Emma and Sydney Stoltz, clad for a cold day of cookie selling. “Neither rain, nor snow, nor sleet, nor hail shall keep these enterprising young women from their appointed task.”

Yes, it’s Girl Scout Cookie time again. Time for those intrepid little salesgirls to load our freezers with enough calories to see us through the next snow storm.

To save us from having to judge 12 different cookies (some sold only regionally), the Washington Post Food Lab did an unscientific study. Read the results below and see if you agree with the conclusions of the tasting panel composed of 2 professional chefs and 3 kids. 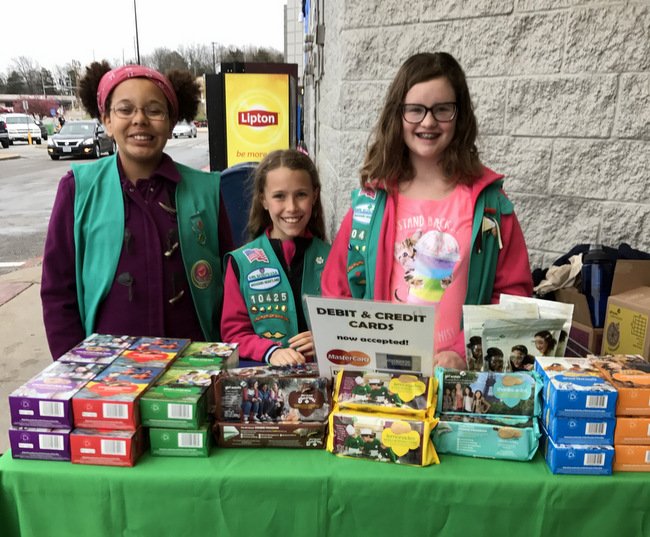 Emma and friends open for business on a warmer day. 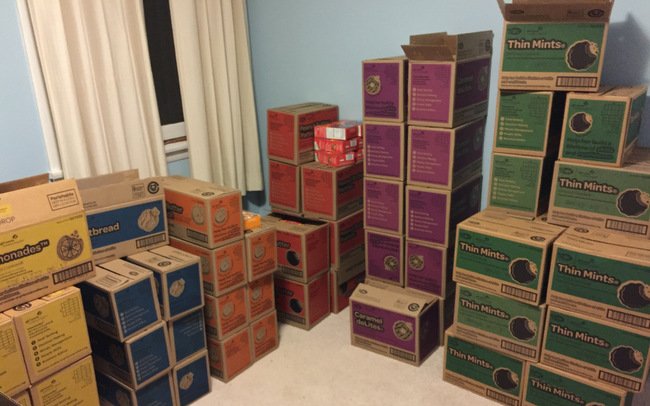 What the family’s spare room looks like during cookie season. Girl Scout cookies are produced by two different bakeries. That’s why some of their cookies have two different names. Example: Shortbread and Trefoils are the same recipe.

Frankly, I thought the panel was unjustly critical, but here goes. None of the five members cared for the Toffee-Tastic—too plain without enough toffee chunks, they said. Nor were they fans of the “plain-tasting, boring” Shortbread or Trefoils. As to the S’mores, the kids said they were better when warmed in the microwave, causing the marshmallow and chocolate to melt. 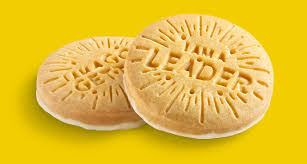 Lemon-Ups are new to the cookie cache this year and lettered with spunky motivational messages. Even so they got a thumbs down from the group for being “crumbly and dry.”

Tagalongs, the peanut butter and chocolate patties were also panned for being too “messy” and for the “uneven distribution of peanut butter.” Apparently, this panel was pretty picky.

The testers liked the looks of the Lemonades with the design pressed into the top, but were unhappy with the lemony smell. The grown-ups went for the Do-Si-Dos, preferring the peanut butter sandwich cookie for its salty/sweet taste and real peanuts. One of the youngsters declared, “This is a cookie I’d eat, but only after the Samosas and Thin Mints were gone.” 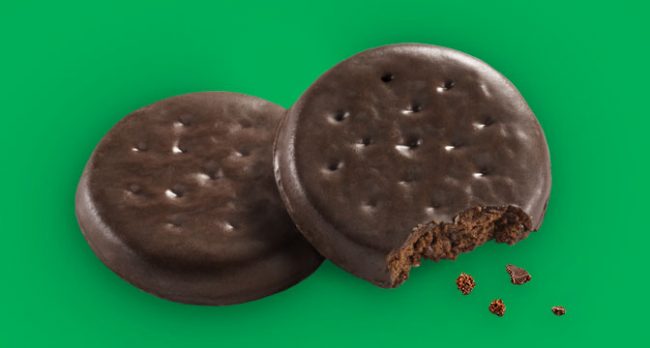 So you can see where we’re headed here. The panel winner was Thin Mints and the runner up Samosas. No surprise. Most of us figured that out years ago. Samosas are the ring-shaped cookie, that’s topped with caramel, chocolate and coconut. It’s a bit heavy, so testers concluded it was not one you could binge.

But Thin Mints, that’s another story. They’re notoriously binge worthy, with their “crunchy snap” and “genuine, refreshing” flavor. What’s more, the cookie gets bonus points for being vegan. 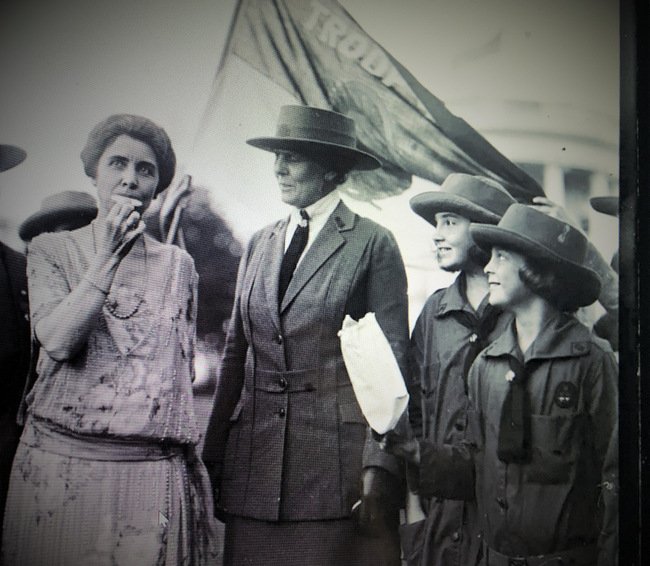 Cookie sales date back to 1917. In this photo, First Lady Grace Coolidge eats a Girl Scout cookie alongside leaders and scouts dressed as the did a century ago. Hmm. . . we didn’t have such spiffy hats and uniforms when I was a Girl Scout leader in the 70s. 🙂  (Library of Congress, Harris & Ewing photograph collection)

Every year 200 million boxes of Girl Scout cookies are sold, enough boxes to circle the globe. In 2012 total sales came to $714 million. Clearly, Thin Mints are the hands down favorite of the panel and buyers worldwide. Can you believe Girl Scout cookie sales top Oreo sales?

The national record for the most boxes sold by one scout is 17,328! That’s hard to beat! During World War II, the scouts sold calendars, due to the shortage of sugar.

According to the Girl Scout website, purchases can be made in St. Louis at Schnucks, Walgreens, Straubs in Clayton, and Kaldi Coffee or ordered on line. But, the most fun is buying from a young cookie peddler. (If you’re in Rolla, I’m sure my nieces will provide.)

Along with the fun and hoopla generated by the annual extravaganza, scouts develop confidence as they learn money management, business ethics, teamwork, goal setting, and people skills. Let’s hope they never go back to calendars again.