I didn’t know I had laryngitis until I tried to answer the phone this morning and sound wouldn’t come from my mouth.  Being an octogenarian living along, I sometimes talk to myself.  If I stub my toe, I issue a mild oath like “dammit.”  When I misplace my eyeglass, I often inquire out loud as to where they might be.  But it was early and, so far, I hadn’t conversed with myself or anyone else.  Unable to speak above a whisper, I cancelled my lunch plans and returned to coughing, sniffling and feeling sorry for myself.

Then I decided to take my condition in hand.  I recalled the old adage: “Feed a cold; starve a fever,” or was it the other way around?  Then a light bulb went off inside my throbbing sinuses.  I recalled having made some chicken soup earlier in the year. And blogged about it. 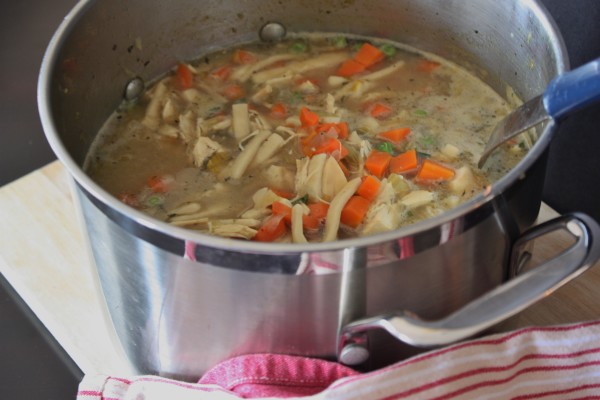 I went to the freezer and reacquainted myself with the icy leftovers I had hidden away for such a time.  There it was: my Magic Chicken Soup!  I popped it in the microwave to thaw and finished it off on the stove.  The fumes alone had a soothing effect on my raw throat.  An old family doctor once told me that for treating a cold, chicken soup was a better remedy than over-the-counter cough and cold medicines.  I scanned the Internet to see why that might be.

Researchers at the University of Nebraska Medical Center claimed that chicken soup helped reduce upper respiratory cold symptoms by inhibiting the migration of infection-fighting cells in the body.

Even commercial soups worked. It may work for a few simple reasons known by mothers for centuries. Breathing steam relieves congestion.  Soup increases the body’s liquid intake, soothes the throat, is easy to digest, and being high in carbohydrates, makes you feel full and satisfied.

Having self-medicated with the healing broth, by mid-afternoon I was able to take phone calls again.  The warm, flavorful broth wasn’t an instant cure, but it has sure made my discomfort more tolerable.