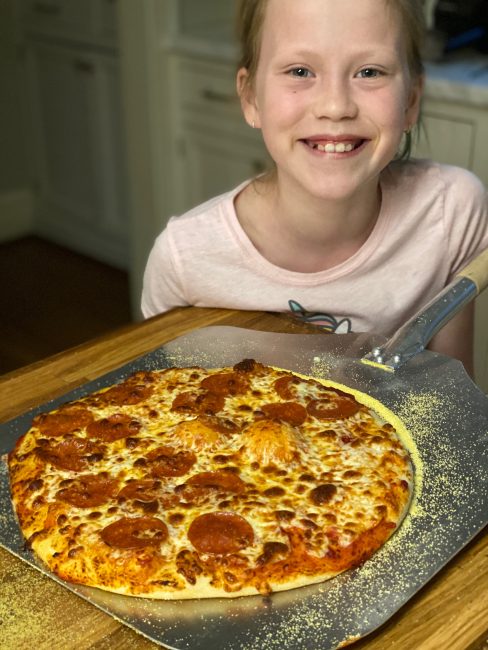 The innovative owner of Pi Pizzeria, Chris Sommers, and his crew, are stepping up to assuage both hunger and boredom during the Corona Confinement.

What’s more Chris throws in some fun math problems to entertain the kids while the pizza bakes.

Pick up is available after 4 p.m. at any one of their three locations: Delmar Loop; Central West End, Downtown STL. I’m taking a few kits to the farm with me today. 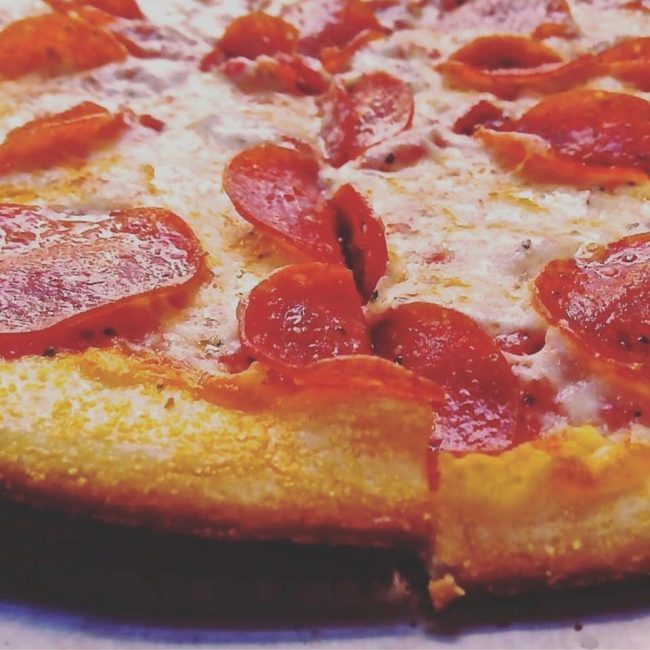 I was invited to dinner at Gringo in the Central West End this past weekend along with my family.  Our friend, Chris Sommers, is an innovative restaurateur and owner of seven eateries, including Gringo and Pi Pizzeria.  The event was billed as a Hopper and Tequila party.  Chris wanted to introduce one of his food sourcers, Juan Manuel Gutierrez, who grows grasshoppers in Oaxaca, Mexico. Because of their similarity in looks, restaurateur Chris Sommers (l.) and my son, Tom, (r.) are often mistaken as brothers. Juan Manuel Gutierrez explains to Robin how he jumped into grasshopper farming.

Being on the cutting edge of trendy cuisine has led Chris to offer a Grasshopper Taco at Gringo.  But this evening, in a private party, he took the concept to the next level, devising a six-course meal centered around chapulines, as the insects are called south of the border. Hopper poppin’ with author/teacher Inda Schaenen.  Here she shows the size of one of the petite morsels.

Now I’ve never eaten grasshoppers before, though I understand they are protein packed and a regular part of the diet for more than two billion people worldwide.  Even the Bible puts its stamp of approval on eating “locust, crickets, and grasshoppers.”  Despite the accolades heaped on the tiny jumpers, I was reluctant to eat outside my comfort zone.

As I starred at the appetizer, I felt like I was in an episode of Bizarre Foods with Andrew Zimmern.  But the bowl of hoppers and crispy pork rinds got our table of seven into the spirit of the evening.  Further adding to the ambience, the television behind the bar showed comedy films of Chapuline Colorado, the highly popular Mexican comedian, a.k.a. the Red Grasshopper. Everything tastes good when wrapped in a saucy taco shell.

As I watched various reactions to the hip-hop cuisine, it occurred to me that eating exotic foods is like swimming in the ocean: some wade right into the deep; other dawdle along the water’s edge; and many stay on the beach.  I’m a toe dipper.  I proceeded cautiously. Appetizer of chapolines and pork rind It was the chapuline-filled taco that won me over.  Delish.  Cleaned my plate.  I found I did better when the Oaxacan delicacy lost its identify and blended into the adjoining food. The next dish—fancy cut root vegetables—came garnished with a sprinkle of chapulines and a nectar made from ground agave worms.  After that we were treated to cheese ravioli with the crispy critters nestled between pasta rounds.  It was followed by halibut served over heirloom beans and seasoned with a sal de gusano—a spicy salt made from the same edible worms.  To my surprise, the dish was quite tasty.  Not at all weird. All this reminded me of an incident that I wrote about in my history of Missouri’s governors.  In 1875, Missouri had a severe infestation of grasshoppers, so great that mile-wide swarms would blacken the skies, wipe out hundreds of acres of farm crops within minutes, and pile up on railroad tracks, blocking trains.

One clever fellow of the day proposed grinding the bugs into flour, much like the Indians had done, and tried to convince Missourians of the insects’ high nutritional value.  He didn’t succeed, but he was obviously a man ahead of his time. Today this mainstay in the diet of billions is becoming haute cuisine around the country. Kudos to Chris Sommers for bringing new culinary experiences to St. Louis.  Chapulines are not likely to become the new French fries, but we’d be far healthier if they did.