Filming in the Kitchen

“It’s time for us to make another kitchen video,” Cyndy said recently.

“I agree. What’d you suggest we cook this time?”

“I know just the thing. It’s one of my family’s favorites: Chocolate Peanut Butter Ribbon Cake,” she said, handing me the recipe. “I found it in an old Dierberg’s cookbook from years ago.” (Note: It’s now on line.)

“Wow, this looks like a perfect dessert for a celebration.”

“I often serve the cake for special occasions and people love it,” she said, “Best of all, It can be made a few days ahead and frozen.”

When Cyndy showed up with the ingredients, we were ready to film from my iPhone. It would’ve been nice to have a producer, director, makeup artist, and cameraman at our disposal, but we were on our own. That meant it took us a lot longer and a bit of swearing to pull off the project.

Since everything goes better after a bite to eat, we followed the advice of MFK Fisher, who wrote: “First, we eat and then we do everything else.” 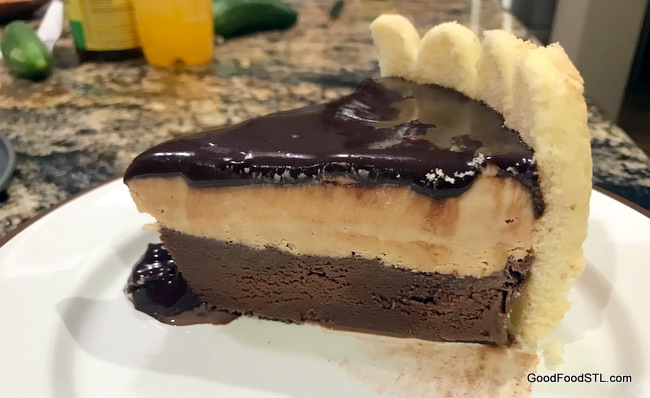 A slice of heaven! Cyndy showed me these two home photos of what the cake would look like. 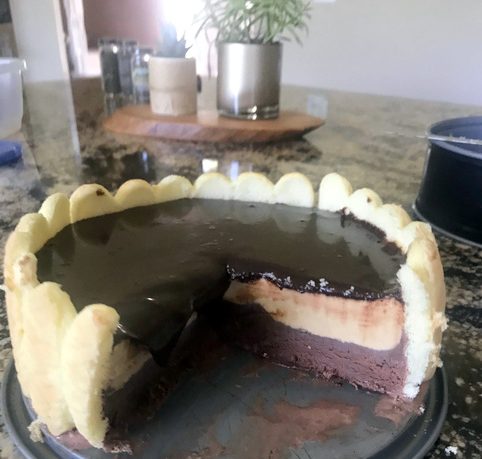 Much Less Time When You’re Not Filming

The cake starts with arranging a ring of lady fingers around the edge of a spring form plan. (Finding the lady fingers took a bit of detective work.)

The bottom layer is chocolate ice cream, next comes a peanut butter mixture, and finally a chocolate sauce topping. In between each layer the cake goes into the freezer briefly to firm a bit before adding the next layer.

I can’t believe how smoothly the recipe came together. It took us some while to video because of camera, lighting, and tripod glitches. But we soldiered on. Kudos to grandson, Austin, for editing—it needed a lot.

The Problem: A Possible Melt Down

I wanted to take the cake to the farm for the holiday weekend. But how could I do that without having to serve it with a straw when we got there? Dry ice to the rescue! I found some at Schnuck’s in Clayton. We packed the foil-wrapped cake still in its spring-lock pan in an insulated bag along with the dry ice. Perfect!

Robin and I unpacked it a few hours later when we reached the farm. We each poked the foil-wrapped cake with a finger. It’s was rock solid! The dry ice apparently outdid itself. A half hour later, we tested it again—-the top still wouldn’t budge.

In a moment of frustration, I carefully transferred the cake to the stove top thinking the small amount of heat still coming from the oven would speed up the thaw. No change. There was no way we could have it for dinner.

Finally, it occurred to Robin what’s was happening. (Bonus points if you’ve figured it out.) We had left the foil-wrapped cake in the spring-form pan for travel and then set it out upside down! We were pushing on the bottom of the pan instead of the top of the cake!

But all was not lost. Once inverted, the ice cream and peanut layers were fine, but the chocolate topping was a bit runny. Tom suggested we serve the cake in bowls rather than on dessert plates and that’s what we did. (I’ll spare you the photos.)

But I did rename the cake: Chocolate Peanut Butter Upside-Down Cake. It was delicious. And, now I have a story to go with the cake.

In small saucepan, combine all chocolate sauce ingredients. Cook for 2 to 3 minutes over medium heat, stirring constantly, until mixture is smooth. Set aside; cool to room temperature.