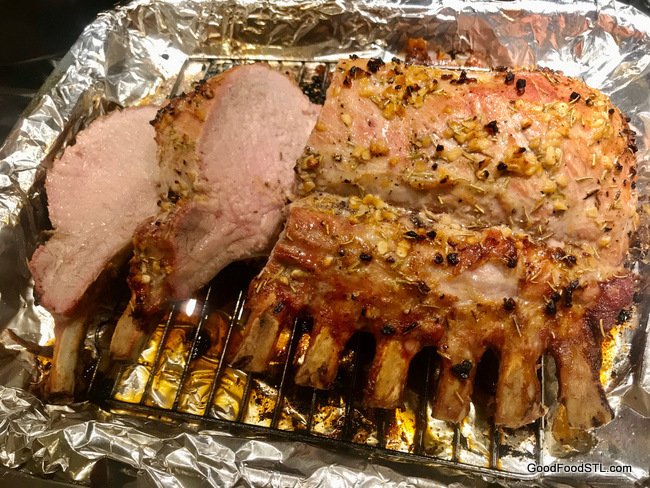 This gorgeous Rack of Pork from Cyndy’s kitchen was seasoned with a rub of olive oil, rosemary, garlic, salt and pepper.

I stopped by Costco recently (actually I never just “stop by” Costco; it’s a 20-mile round trip from where I live.). I made the trip because I was wanting their six-pack of stuffed peppers, that’s so doggone good. Sadly, they hadn’t gotten any in that day, but Cyndy snagged a Rack of Pork, that was quite stunning.

The next day she sent me dinner photos along with a note suggesting I try the dish at the farm some weekend.

I Check It Out

From an online search, I found that this cut of meat is typically called a Pork Rib Roast or Rack of Pork. It looks like 8, or so, pork chops strung together. But then there’s the Kurobuta variety, that’s the top of the line among carnivores. The name is Japanese and describes a certainty quality of pork rather than the cut.

“Eating High on the Hog”

All Kurobuta pork comes from Berkshire pigs, but not all Berkshire pigs qualify for the prime label. The deluxe piggies are raised without antibiotics, added hormones or growth stimulants. The meat is darker than other pork, with a richer taste and good marbling.

Whichever you buy, you’re “eating high on the hog,” (an expression my grandparents used to denote someone of means, who was able to afford the more desirable loin cuts, running along the back of a hog).

Most local groceries carry the regular Rack of Pork. But look on line or at specialty butcher shops for Kurobuta pork. 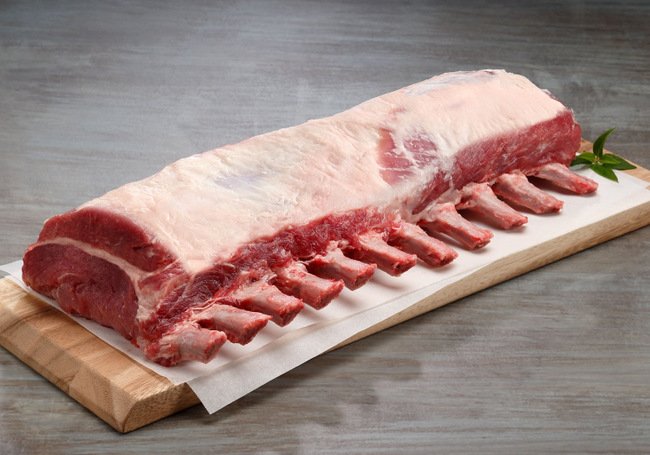 A Kurobuta Rack of Pork from Snake River Farms sells on line for $129. This rack has been “Frenched,” that is, the meat and fat have been scraped away, exposing the end bones.

The Uncertainty of Doneness

For years, I’ve been eating, and serving, overcooked pork. Why? Because the cooking pundits told us pork must not be pink. The more it looked like shoe leather, the better.

But now the USDA says we should go by the internal temperature, rather than the look. Letting the pork reach 145 degrees and rest 3 minutes is just as safe as cooking to a higher temperature.

A Fork in the Pork

The guess work in cooking pork—or any meat or poultry—can be removed if you use a “Fork.” Well, not just any old fork. If you poke your pork with the Digital BBQ Fork, you’ll get the internal temperature within 3 seconds. 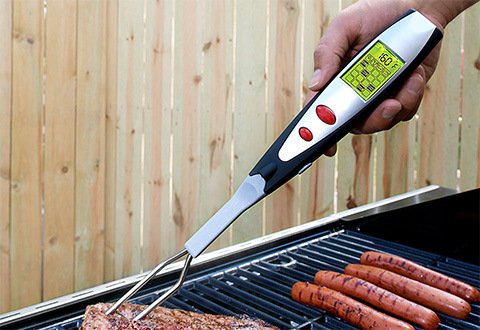 The Digital BBQ Fork from Sharper Image operates on two AAA batteries and sells for about $40.

The Fork even lights up and beeps when perfection is reached. A built in light aids your reading, if you like to cook outdoors after dusk. When it comes to doneness, this kitchen gadget is designed to calm your culinary angst. 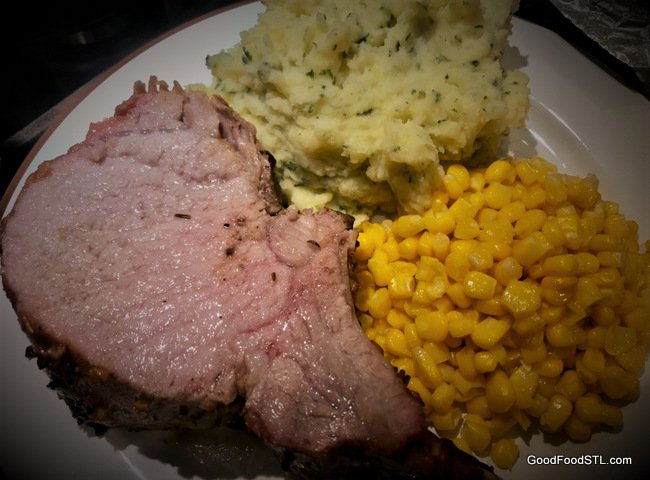 Cyndy followed the package directions and cooked the roast at 450 degrees for 15 minutes, then reduced the heat to 350 degrees for 75-90 minutes. It was perfect!

A Rack of Pork can also be rolled into a Crown Roast and tied into place as shown in this New York Times video. Various stuffings can be added after the roast is cooked. Butchers sometime offer little “caps” to go over the end of the bones when serving. This entree is definitely a holiday or company showpiece!