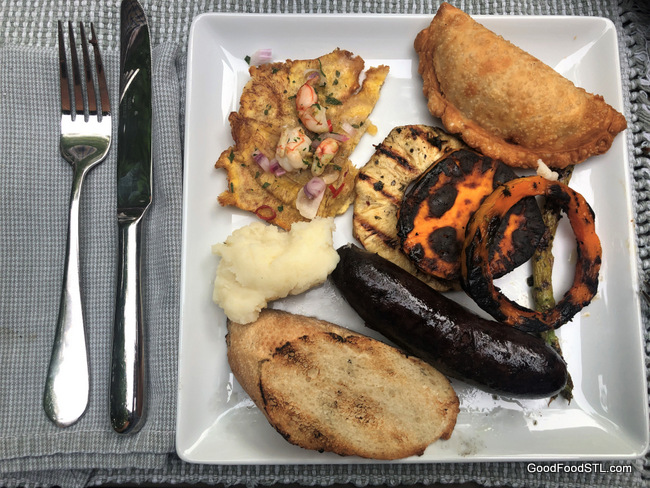 Patacones Rellenos (fried green plantain), Empanada, Grilled Vegetables, Blood Sausage, bread, potatoes. (The presentation is far better at the restaurant. This was just my plate assembled at home from our curbside pickup.)

South Americans love their meat. In Brazil, I recall eating in a restaurant, that brought various cuts of meat to our table throughout the evening. It reminded me of the way dim sum is served in Chinese restaurants. In South America, there’s a name for this all-you-can-eat style of service. It’s call rodizio and it’s the practice of restaurants known as churrascaria.

Servers come to the table with knives and skewers of various meats, which they pull off the spit and slice at the table. This continues until the diner signals they’ve had enough by turning over a colored table card: green means “keep it coming,” while red declares “enough, already!”

A New Star in the Maplewood Galaxy

My capacity for meat has lessened over the years. Even so, I’ve been eager to try Asador del Sur (translates, Grill of the South).

It was my South American son-in-law, JC, who put me onto this place located in Maplewood, where Reed’s American Table used to be. The owners are cooking foods from their native countries. Daniel Gonzalez, is from Uruguay and his wife, Maria Giamportone, from Ecuador. Even though JC is from Bogota, Colombia, many of the dishes are familiar to him. 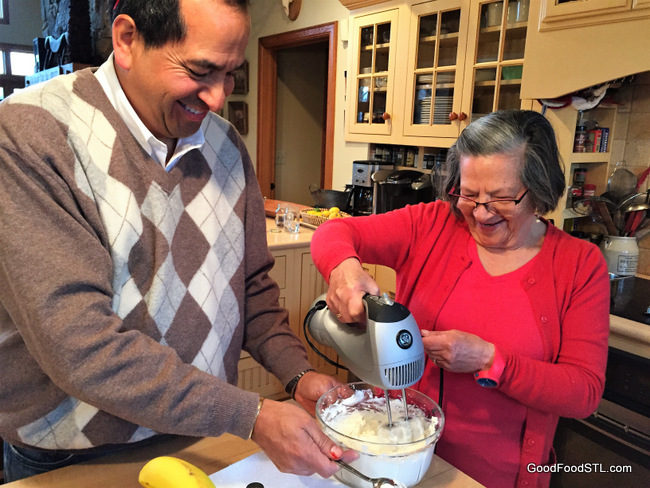 JC and his mother cooking in the farm kitchen during one of her visits. Nothing will ever replace home cooking, but having a South American restaurant nearby is a good thing. 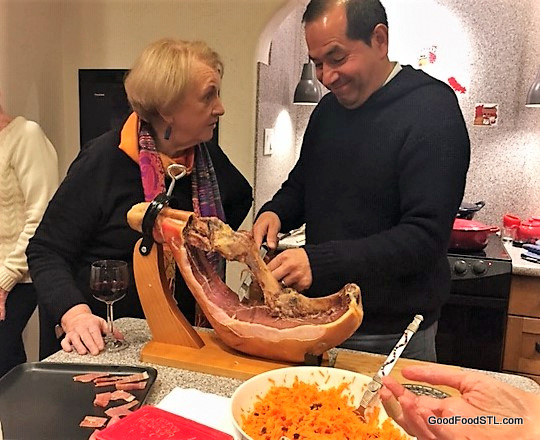 This is one of my favorite family photos, because of the expressions on each of our faces. JC appears to be restrained, as I assert my opinion on the slicing of a Serrano ham.

Asado del Sur just opened in August. (Imagine the bravery it took to open a new restaurant during a pandemic!) It’s not an all-you-can-eat rodizio, but they do serve a variety of grilled meat and vegetables. JC pronounced the Bone in Rib Eye excellent.

Ours was a carry out meal eaten at home, so we shared a few dishes. The Empanadas were quite tasty, as was the Vegetable Parrillada of grilled mushrooms, asparagus, pineapple, sweet potatoes, and butternut squash.

A Menu for All Tastes

If you’re not into such things as Grilled Sweetbreads or Blood Sausage (though the sausage was much better than the name would imply), there’s a number of traditional items, such as mashed potatoes, grilled corn, fries, salads, and chorizos sausage. One of my favorites was the Fried Sweet Plantains. Don’t miss that one.

The Charm of Chimichurri

Chimichurri sauce is a highly-favored condiment in many South American countries, The mixture of parsley, garlic, olive oil, oregano and red wine vinegar is used most often on grilled meat. But it was so heavenly, that I turned it into a dip for my vegetables.

We passed on dessert, but several on the menu caught my eye: the Gluten-free Flourless Chocolate Torte, the Ecuadorian-style Custard (or Flan), and the Arroz con Leche (rice pudding). My mother made rice pudding, so seeing this on the menu brought back childhood memories.

I’m already drooling over one of their highly acclaimed soups: Homemade Lobster Bisque with brandy, tarragon, crème fraiche and chives. Next time for sure.

Take a look at their stunning website for photos and menu. For those of us unlikely to be traveling anytime soon, Asado del Sur is a splendid South of the Border getaway.