Nancy Reagan and Barack Obama give each other a non-partisan greeting.

Nancy Reagan’s most lasting contribution might not be the slogan, “Just Say No,” but a recipe for Baja Chicken that she made popular while First Lady.

It was everything a good recipe should be: quick, simple, nutritious, and flavorful. Women seeking to lose weight could prepare the dish for their families without making them feel deprived.

If you’re feeling nostalgic, click here and take your taste buds for a stroll down memory lane. Or you can squint and read from the old newspaper clipping. 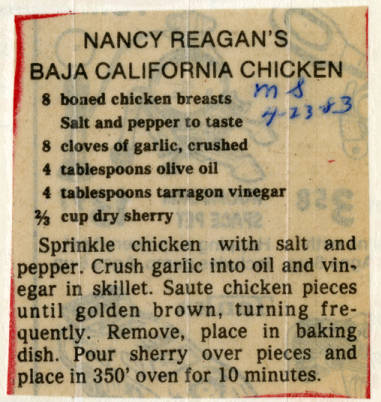 Mrs. Reagan said she served Baja Chicken with Rancho California Rice, but I don’t have nerve enough to pass it on without an artery alert. It calls for 3 cups of cheese, 2 cups of sour cream, and a half-stick of butter.  You could get by with that in the Eighties, but not today. If you can’t grow greens, you can always find them at Soulard Market.

I heaped a large portion onto my plate and gave it a splash of balsamic vinegar.