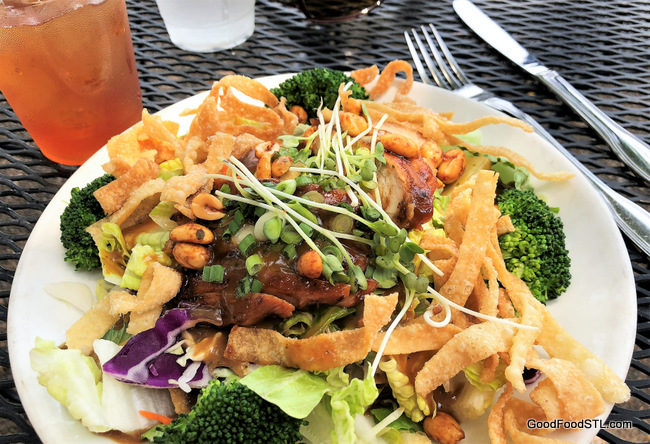 I hate it when restaurants go out of business and take my favorite menu items with them. Food writers call it Lost Dishes. One of those I still mourn today is Cardwell’s Chinese Barbecued Chicken Salad. It was so fresh and crisp, loaded with cabbge/lettuce, and broccoli and topped with crispy wontons, peanuts, and daikon radish sprouts. All coupled with a divine Peanut Dressing.

Then, like a gastronomique miracle, I found the recipe online! The St. Louis Post-Dispatch had printed the original recipe years ago. Whoop-de-do!!  I gave it a try last weekend (twice) with stellar results. 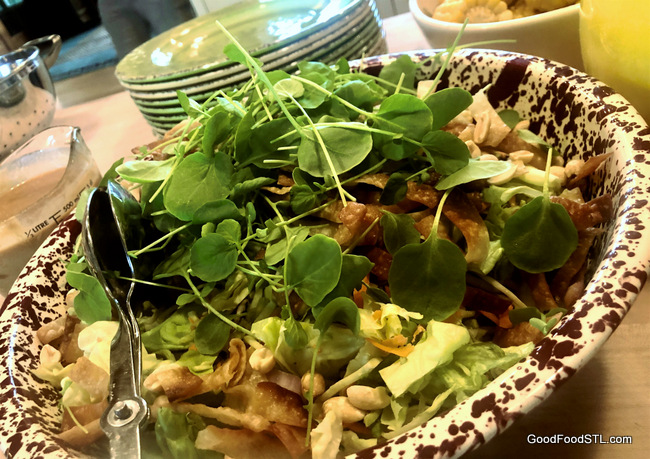 In my version of Chinese Barbecued Chicken Salad, I topped off the dish with some pea shoots, since I forgot the daikon radish sprouts (which I prefer) that were served on Cardwell’s salad.

Playing with the Peanut Sauce

I did, however, make a few adjustments. The peanut sauce was a bit too thick, so I added water until it was just right. Come to think of it, chicken broth might have been even better.

The recipe makes about 2-1/2 cups of dressing, so you might have a bit left over, that is, unless you decide to finish it off by the spoonful. 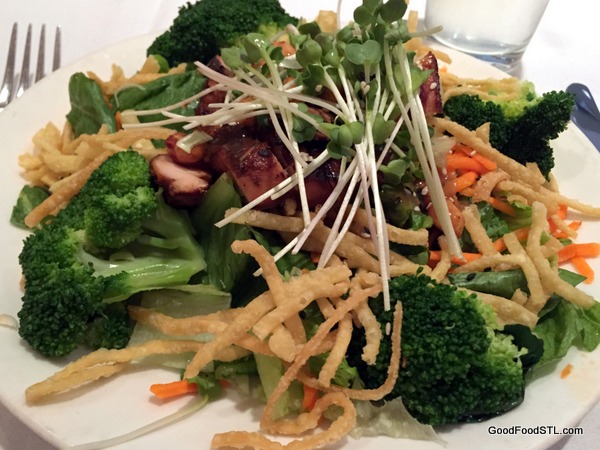 Broccoli and daikon radish sprouts were a later addition to Cardwell’s original recipe.

I had the most fun playing with the wonton skins. They’re sliced into 1/4″ pieces and fried until crisp and golden. You have to pay attention here, because some pieces want to over cook. I threw those out—some I ate for testing purposes. 🙂

The next day when I made more of the salad, my niece, Katy, took over the wonton cooking. She pressed a bit of Maldon salt into the pieces before putting them in the skillet. I liked that, though it added a bit of tedium to the preparation. 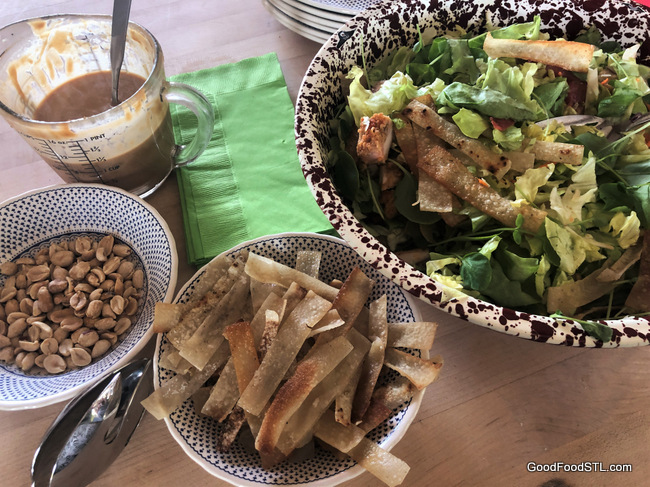 Some assembly required. Set out the ingredients and let your guests compose their own salad.

This salad can be made with or without chicken. When using poultry, I look for the flattest chicken breasts I can fine or I pound them thin.

Then I shellac the chicken with some Char-Siu Sauce (a Chinese barbecue sauce), and cook the pieces in a skillet about 3 minutes on each side or until inside is no longer pink. Then I slice the chicken into thin strips before including in the salad. Or you can offer the barbecued chicken slices in a bowl when serving as a do-it-yourself-salad.

In a hurry? Leave off the barbecue sauce and grab a rotisserie chicken at the grocery. Or go vegetarian with no chicken at all. 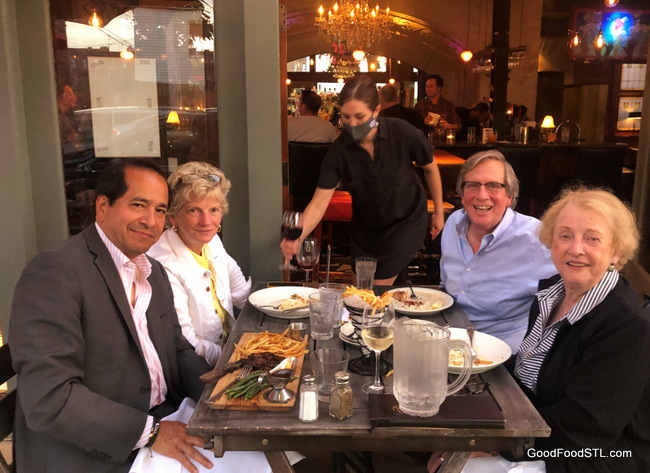 My social calendar is picking up speed. I’m eating out with my vaccinated family and friends at restaurants where servers are still wearing masks. When possible, I eat outside as I did this week at Frazer’s. The place is just a stone’s throw from the brewery and sports an open kitchen that you can see from the large street window.

For the Merry Nibbler

I have a special fondness for their Chorizo Stuffed Dates. Whatever you order at Frazer’s, by all means, jumpstart your meal with a round of these tasty morsels. 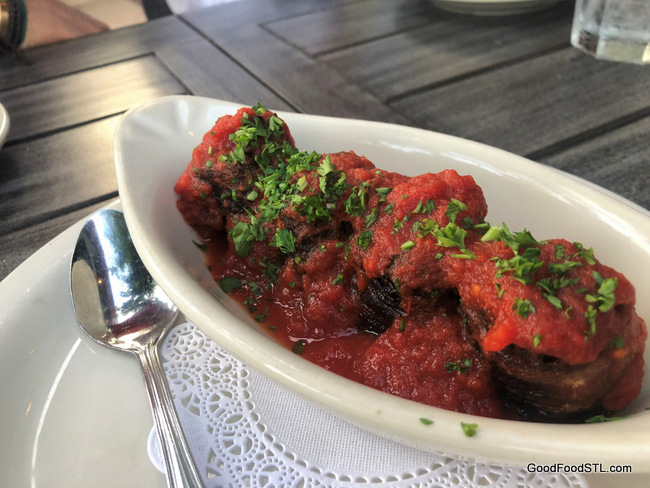 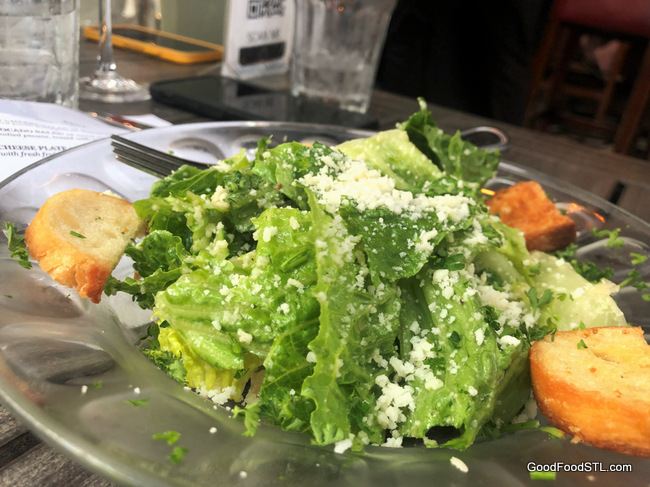 Entrees to Swoon Over

For an entrée, I went with the halibut, flaky and flavorful, as it should be. The Salmon Frazer on the plate next to me was all kinds of amazing and the Caesar Salad crunchy and well dressed, offering a perfect foil for the fish entrees. 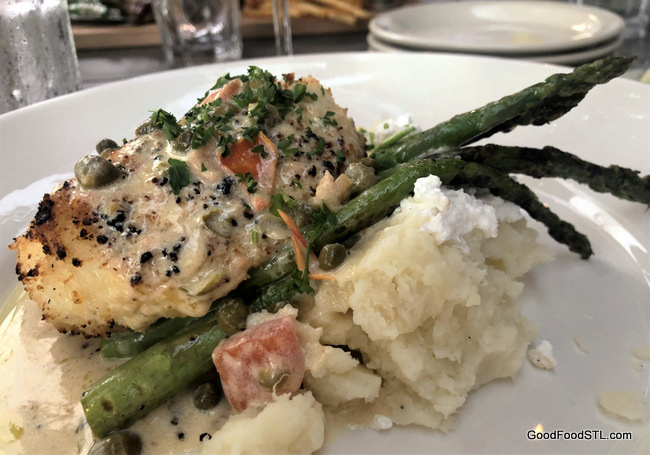 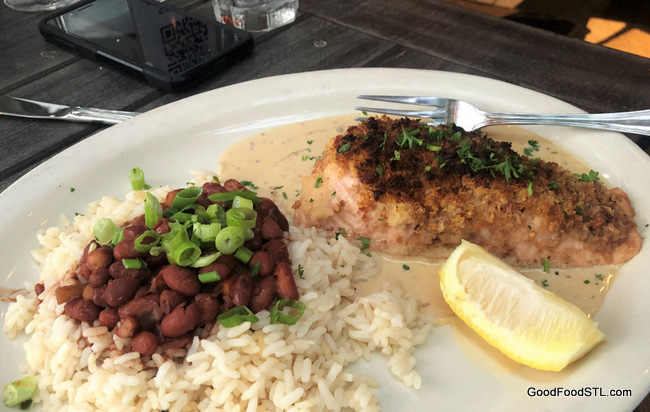 Salmon Frazer baked with a horseradish-pecan crumb topping and served over mustard cream sauce with red beans and rice. 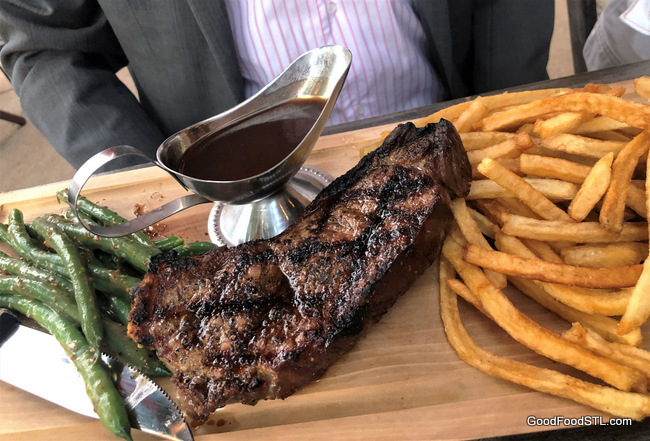 I didn’t taste the steak, but I did have a handful of the fries. Wow! Some of the best I’ve had in town. 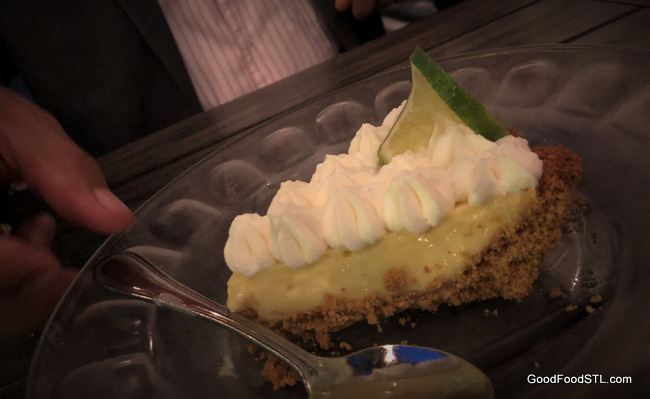 From burgers to barbecued shrimp to meatloaf to pork schnitzel, at Frazer’s there’s something for the adventuresome palate as well as the picky one.