Strawberry-Spinach Salad  (I also added a lot of lettuce)

Spruce Up Your Salad with Fruit and Feta

Instead of dumping a package of salad mix into a bowl and coating it with bottled dressing, try this switch up.  Start with baby spinach (I used mostly lettuce because I had it), strawberries (I threw in a few blueberries, too), toasted pecans, (I used my favorite Spiced Nut recipe), and goat cheese (nice creamy tang).

Ta-da! Your salad is a color wheel, brimming with fruits and vegetables. Crown this royal melange with the 3-ingredient dressing shown below. Just whisk together the chopped shallots, olive oil and a fruity vinegar, like raspberry or champagne vinegar. 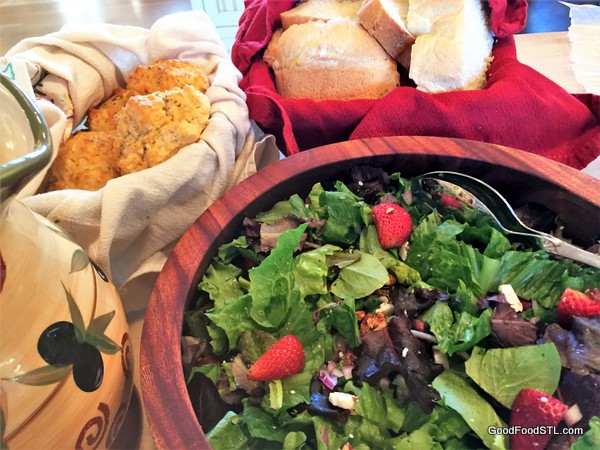 Put Your Salad on Stage

Transfer your salad to your prettiest bowl. Avoid plastic containers. Even for an everyday meal, I treat my salads to a glass bowl or an attractive wooden one. Your salad deserves a good stage. Then, before turning your family/guests loose, take a photo. Why? Because images are a reminder of your creations and they’ll inspire you to make them again. 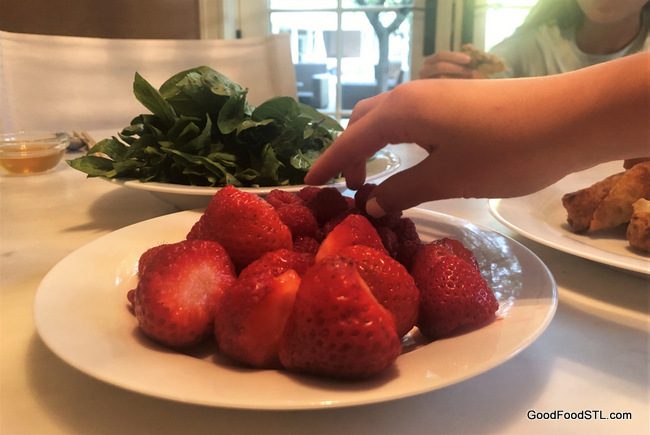 I wish I had photos of some of the wonderful dishes my mother made: chocolate cake, fried chicken, porcupine balls (how did that get in here?), potato salad, spoon bread, meatloaf, and chicken and dumplings. But we didn’t take pictures of food back then. People posed in their Sunday best or stood in front of signs or landmarks while on vacation. After all, each photo cost money.

It took nearly a week for our film to be developed at the drug store and cost more money to get a new roll. But now we have no such excuses for ignoring special moments. Food memories are some of our fondest and most colorful. Don’t miss those kitchen memories. 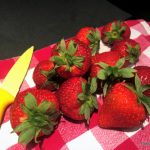 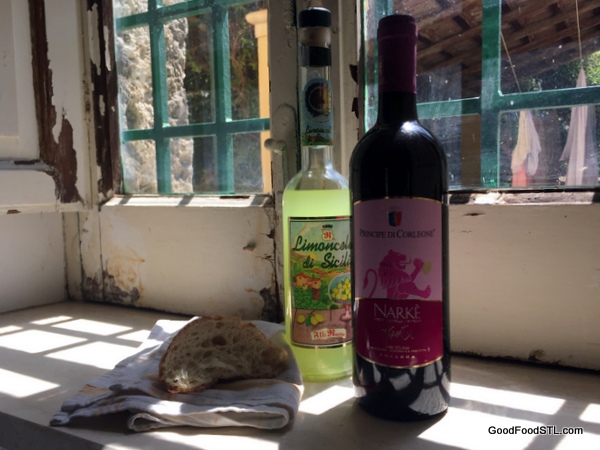 In Venetico, Sicily. A photo from a well-remembered trip years ago.

Over lunch, a friend from Sicily revealed her 90-year-old nona’s (grandmother’s) secret to fine cooking. Simplicity and olive oil.

She gave an example: Nona’s Eggplant. It’s one of those non-recipe recipes, that has so few ingredients and steps there’s no need to get out a pencil. Even so, I scribbled a few instructions on a scrap of paper I found crumbled up in my purse. This is my adaptation from those notes. Take 2 eggplants, my friend said, and cut them into 1/2″ rounds. I inquired as to the type and she seemed quite happy with the small Japanese variety. Sweat the eggplant in a colander.

Now all you eggplant sweat-ers know that means to sprinkle the rounds with Kosher salt and let them sit for 30-60 minutes in a colander. Place a plate beneath to catch juices and a weighted plate atop the rounds. The pressure forces any bitter juices to drain out. Gently press out any remaining juices and rinse.

No more salt is needed. Place on oiled baking sheet in a 450-degree oven and bake until brown on one side. Flip over to brown on other side, about 30-40 minutes total. Serve warm. 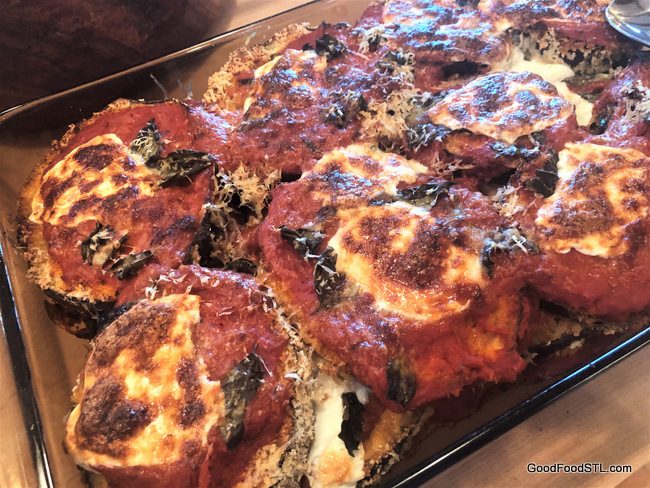 When I want to dress up this dish, I give the cooked eggplant a splash of spaghetti sauce and a bit of fresh mozzarella. Then I return the slices to the oven briefly to melt the cheese. So few ingredients for so much flavor To sweat the eggplant, sprinkle with Kosher salt, place in colander over bowl, and press down with a plate that has some weight atop. I got about 2 tablespoons of liquid after about 45 minutes. Rinse and pat dry. Coat rounds lightly with olive oil and press crumb/cheese mixture onto both sides. Place on oiled baking sheet. (I used slightly oiled parchment paper for easier clean up.)  Bake at 425 degrees until brown on one side and then turn over and brown other side.

A bit of Sicily at your table.

Kitchen Note: There’s an age-old debate as to whether to sweat the eggplant. But according to Nicholas Clee, author of Don’t Sweat the Aubergine, the varieties of eggplant available today don’t have the bitterness they once did. Others argue that it depends on the age and variety of the eggplant. To be on the safe side, they say, it’s best to sweat. Video on sweating eggplant here.