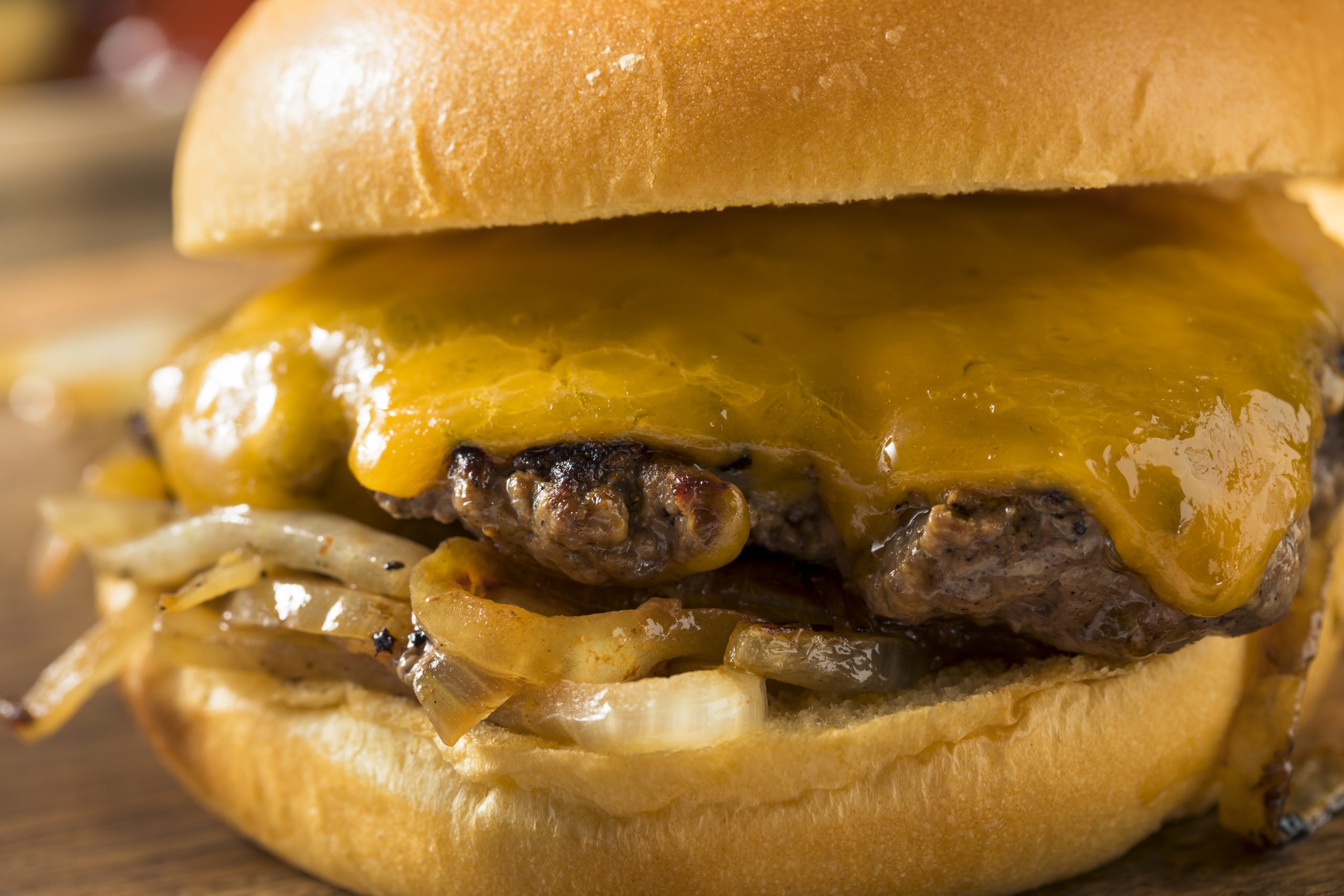 The cooking method for this Oklahoma Fried Onion Burger makes for a caramelized, steam, and seared onion patty.

Now I’ve never had an Oklahoma Onion Burger before. I had no idea what made it so special. But recently the internationally acclaimed chef and cookbook writer, J. Kenji-Lopez Alt, did a piece for The New York Times, that caught my eye.

I learned that the iconic burger got its start in El Reno, OK, during the Depression and Dust Bowl, when meat was costly, but onions cheap. A half pound of paper-thin onion slices atop a 5-cent meat patty made for a tasty, but inexpensive sandwich.

Smashing in the Flavor

The beef patty has all the ingredients of most burgers, but they’re assembled and cooked in a different order.

It all starts with a clump of good ground beef. But then, things get weird. You top the meat with a haystack of thinly slivered onions and mash the burger-onion combo into a dry skillet to cook. It takes on the look of a smash burger. Recipe here. 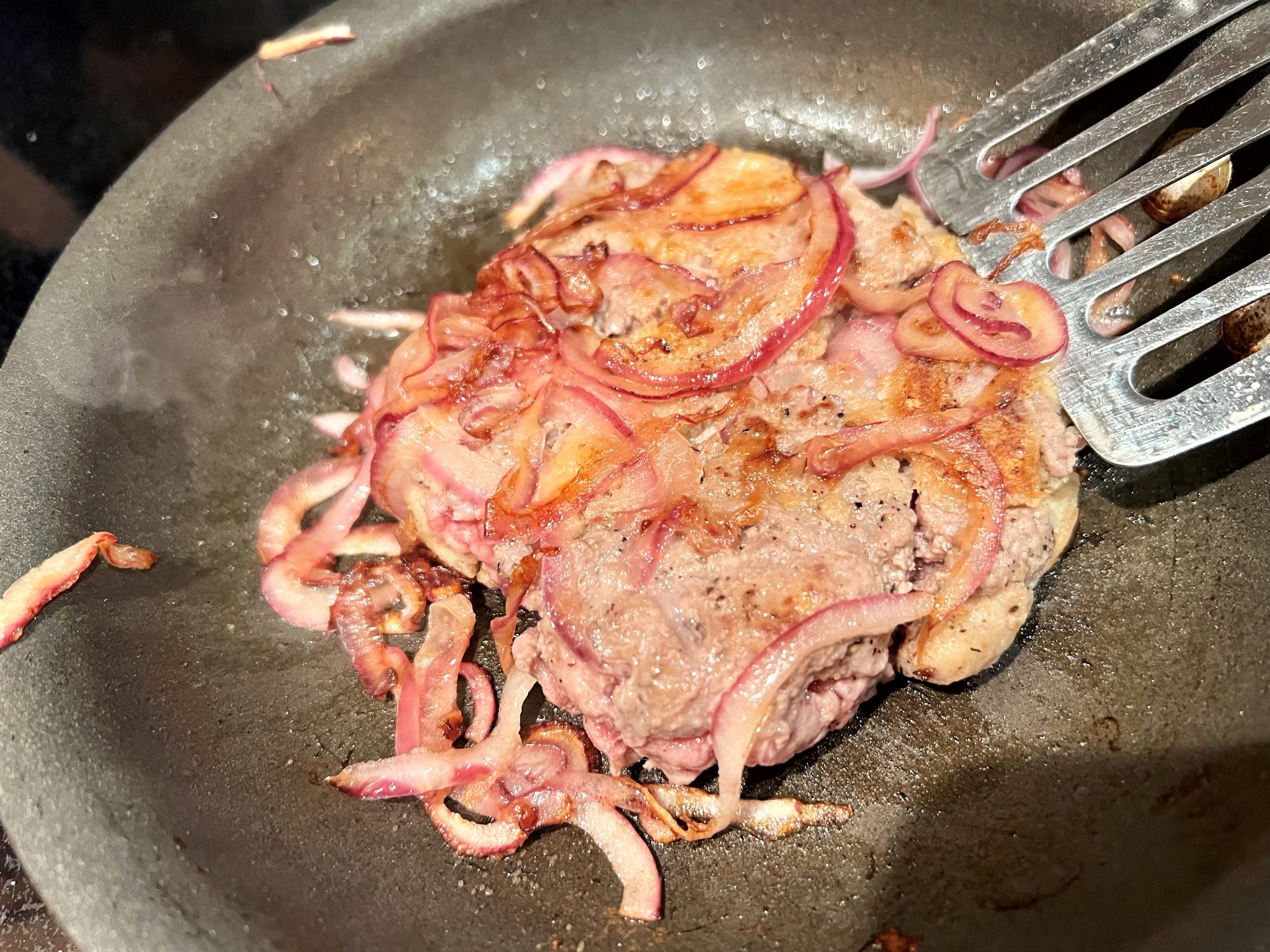 Beef patty on its way to burger-hood.

The steam from the squashed onion mound will enter the patty, while some of the rings will caramelize a bit from being on the underside of the meat. (A little scraping with a spatula maybe needed here, but the flavor is great). The onion also adds a pleasant aroma to the burger—and kitchen.

As to the Bun

While The New York Times calls for a Hawaiian roll, the bread tends toward the sweet side. You might want to go with Martin’s potato rolls that are soft, but not sweet. 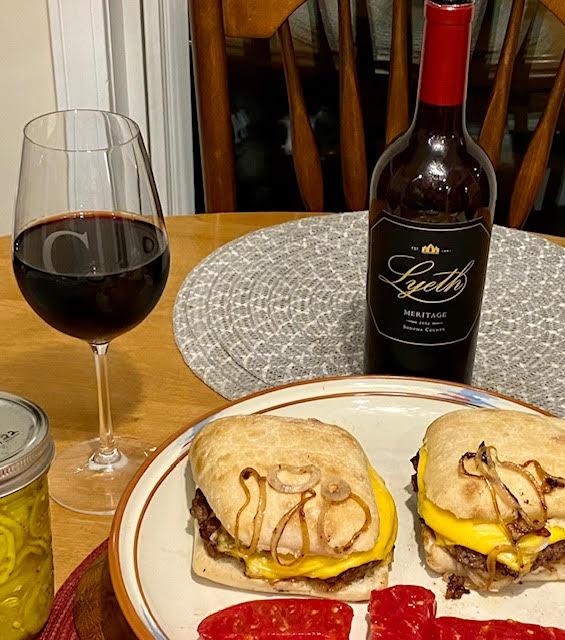 The kitchen tests made for a lot of variety in outcome.

My nephew, Bobby, and wife, Peggy, agreed to play “test kitchen” with me.  I overdosed my burger with onions; they undercut the onions and made thicker patties.  (See above)

Confession here: I didn’t have any buns, so I nixed that part. I remembered something my mother always did during the war to stretch hamburger meat. I wet some bread and crushed it into the mix. I ate my Oklahoma Onion Burger sans bun and it was still delish.

Peggy thought it was great, but Bobby, who’s not an onion enthusiast, thought it was just okay. I think a lot depends on just how much you prefer the onion scent and texture to invade your burger. That’s okay with me, especially when I have extra onions on hand—and no soft bun. 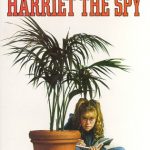 I share a food favorite with 11-year-old Harriet the Spy—a love for a good tomato sandwich. The story-book sleuth preferred her tomatoes on squishy, white bread with mayonnaise. 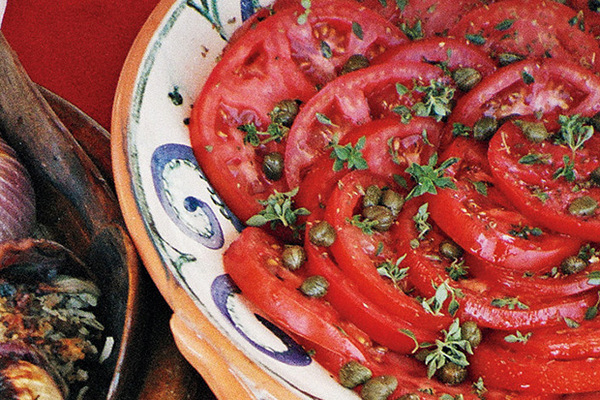 Fifty years later cooks added parsley and garlic to tomatoes, getting the recipe closer to the pasta sauce we know today.

By the 18th century residents of Naples and Tuscany started pairing tomatoes with bread, placing them atop bruschetta. The tomato sandwich was born! 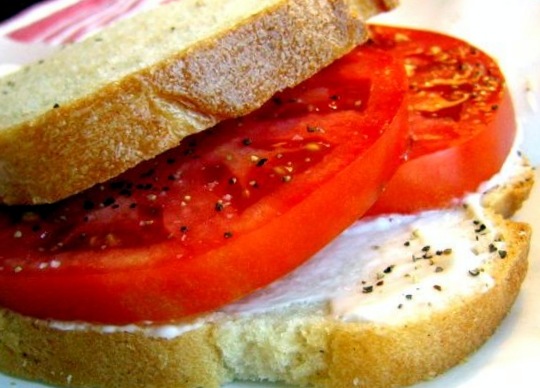 Giving instructions for a Tomato Sandwich are like giving recipes for a Peanut Butter and Jelly Sandwich or a Grilled Cheese. The name should say it all.

Actually, there are a few secrets to the proper Tomato Sandwich worth mentioning: (1) salting the tomatoes and letting them sit for at least 5 minutes to prevent sogginess, and (2) using real mayo.

(Note: Cartoon savant Lucy Van Pelt, says sandwiches should never be cut. They should be folded to prevent the flavor from falling out. You are warned.)