I first ate at Taco Buddha on their opening day in August, 2017. Their menu was simple and the food packed with incredible flavor. Even so, the limited parking and dinky-space were troubling.

But owner Kurt Eller didn’t see those as handicaps. He saw his tiny taco shop simply as “encompassing a small footprint.”

Now with their addition of a patio, the “small footprint” has become a “bigfoot.” Since COVID, the restaurant has taken on more of a street cafe look with the addition of a covered patio, that gets enclosed during the winter months. More space; more customers. 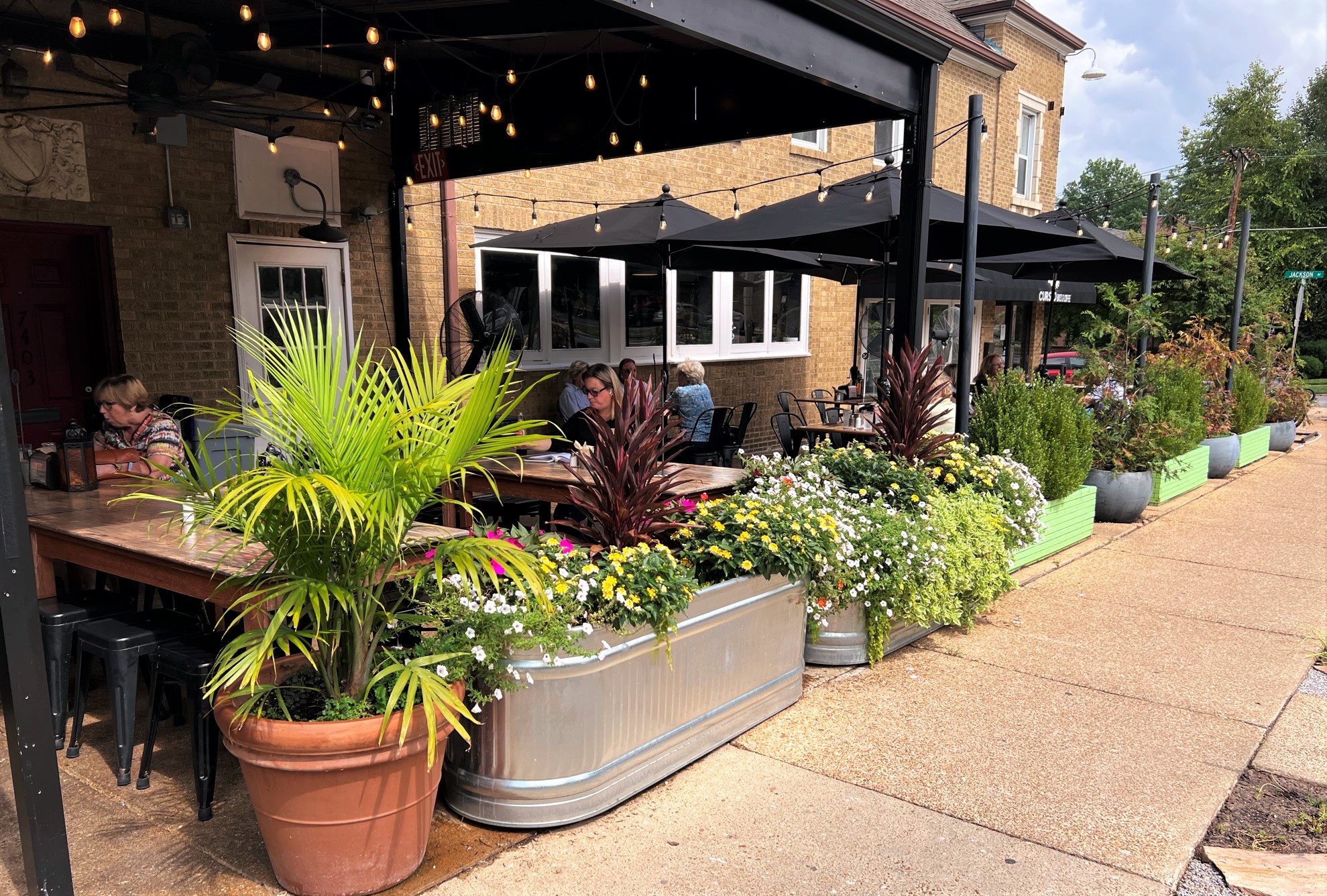 In case you’ve missed it while in University City, the neighborhood cafe bumps up against Cursed Bike and Coffee Shop on Pershing. Since it’s located along the route I drive to my condo, I pass there often.

If it’s noon-ish, I look to see if there’s space in the parking lot or on the street. I do best mid-afternoon, when the lunch bunch thins out. For those wanting greater camaraderie, evenings are perfect.

When I see a place like Taco Buddha outdoing its size, I think of Yogi Berra’s quote about his favorite restaurant: “It’s so crowded no one goes there anymore.” 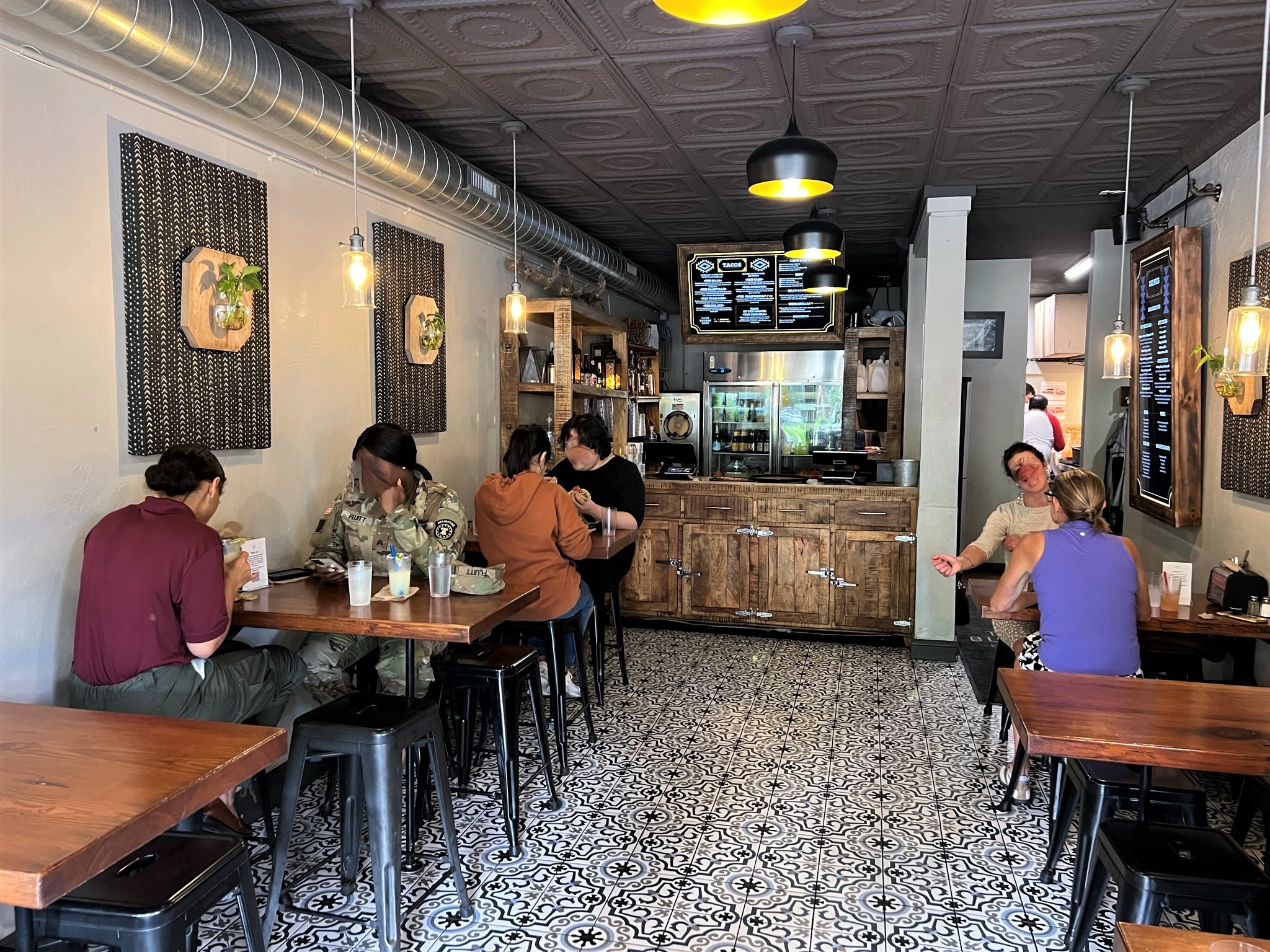 Taco Buddha has a distinctive Southwestern point of view. 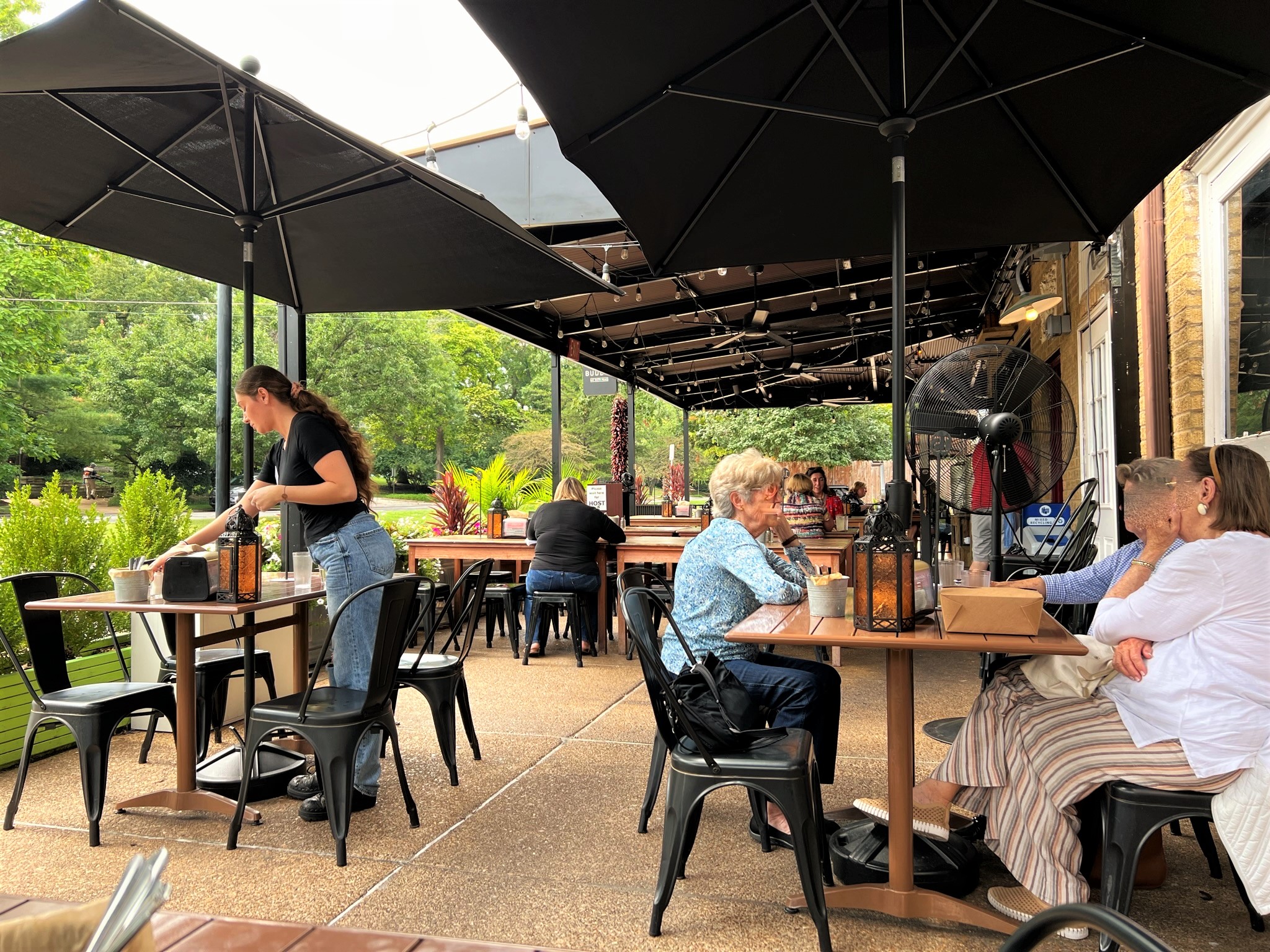 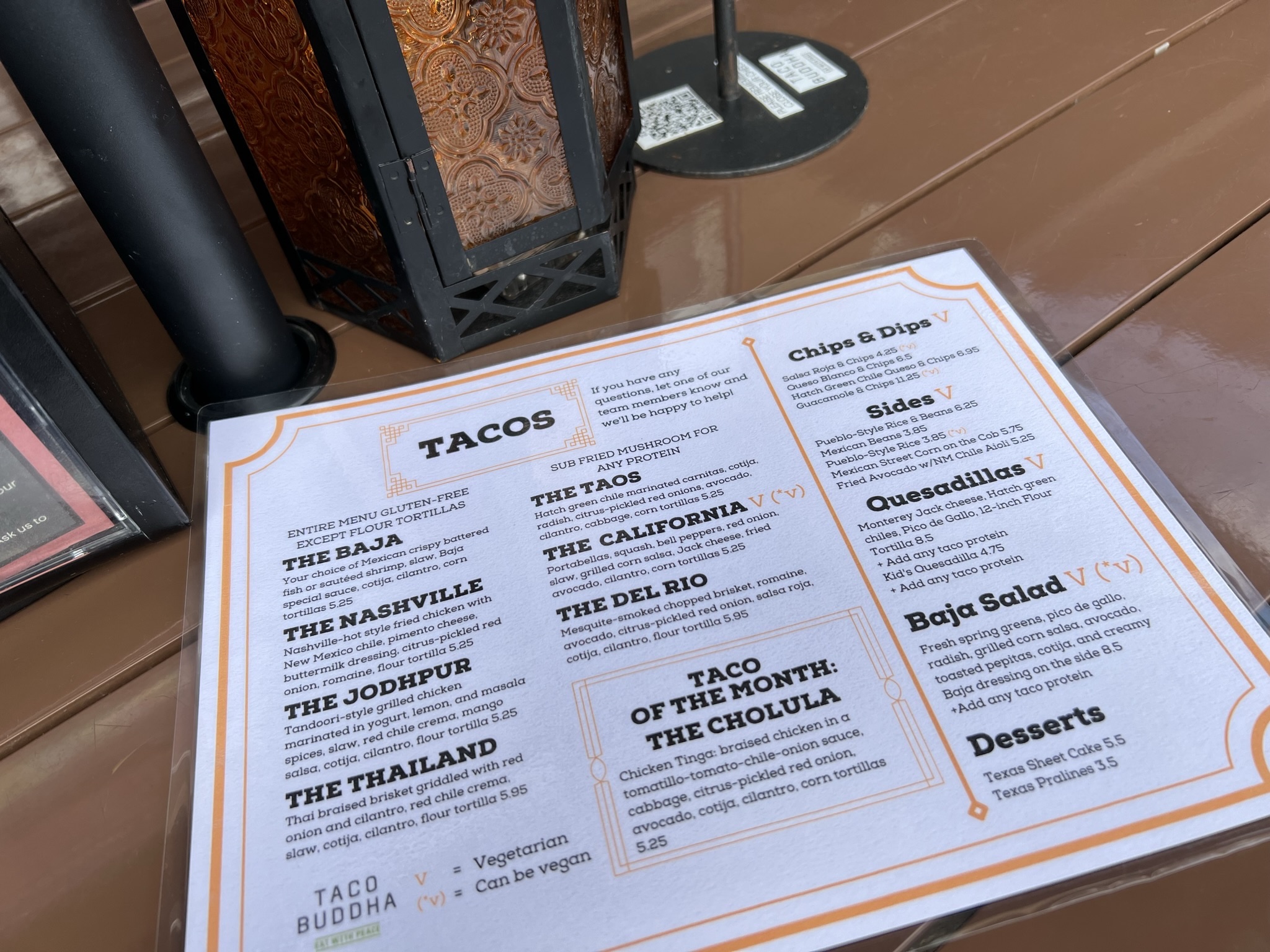 September’s Taco of the Month is The Cholula made with braised chicken in a tomatillo-tomato-chile-onion sauce, cabbage, citrus-pickled red onions, avocado, cotija cheese, and cilantro on corn tortilla. The entire menu is gluten-free, except for the flour tortillas. No peanuts, peanut oil, or soy oil is used. 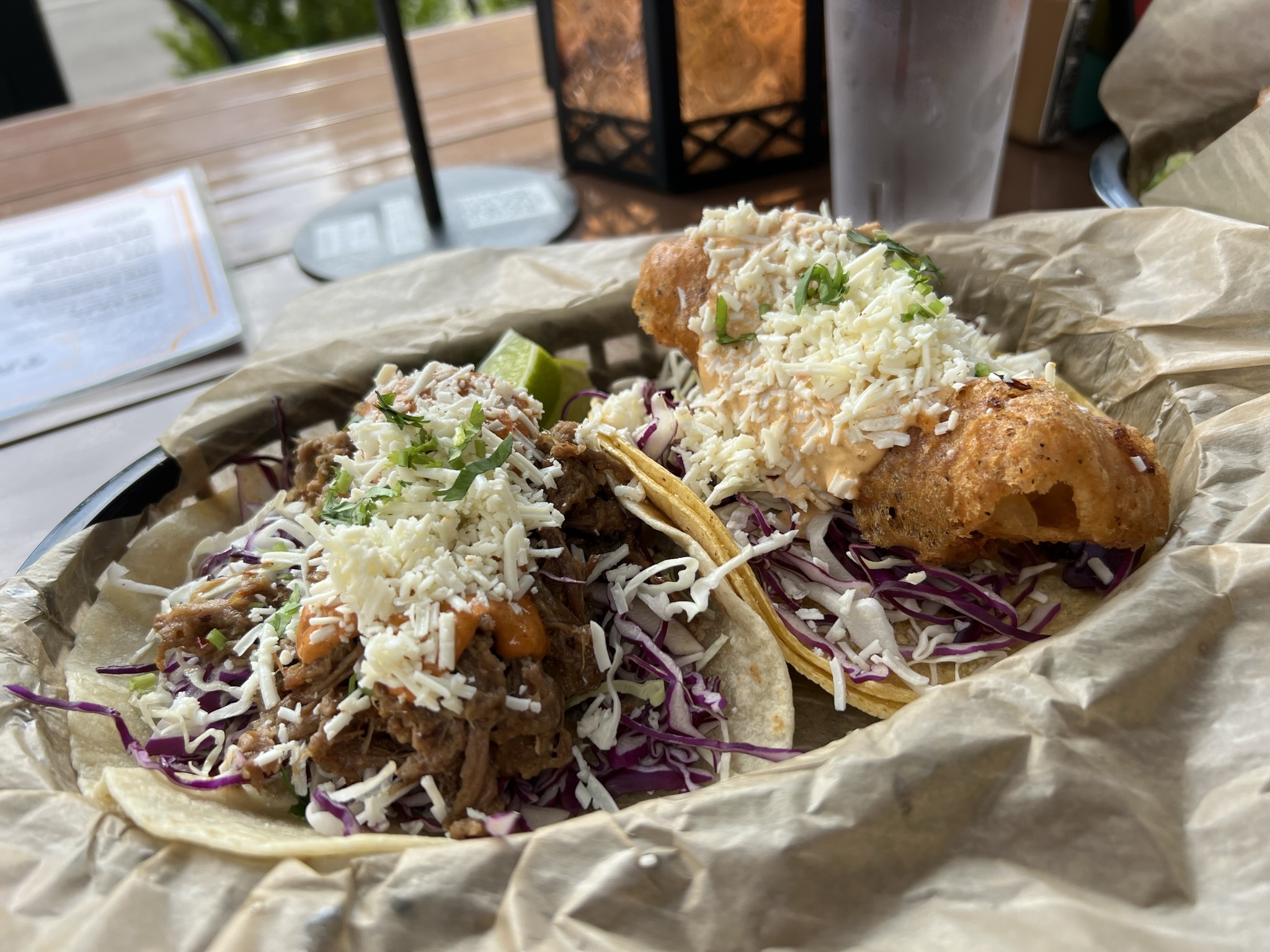 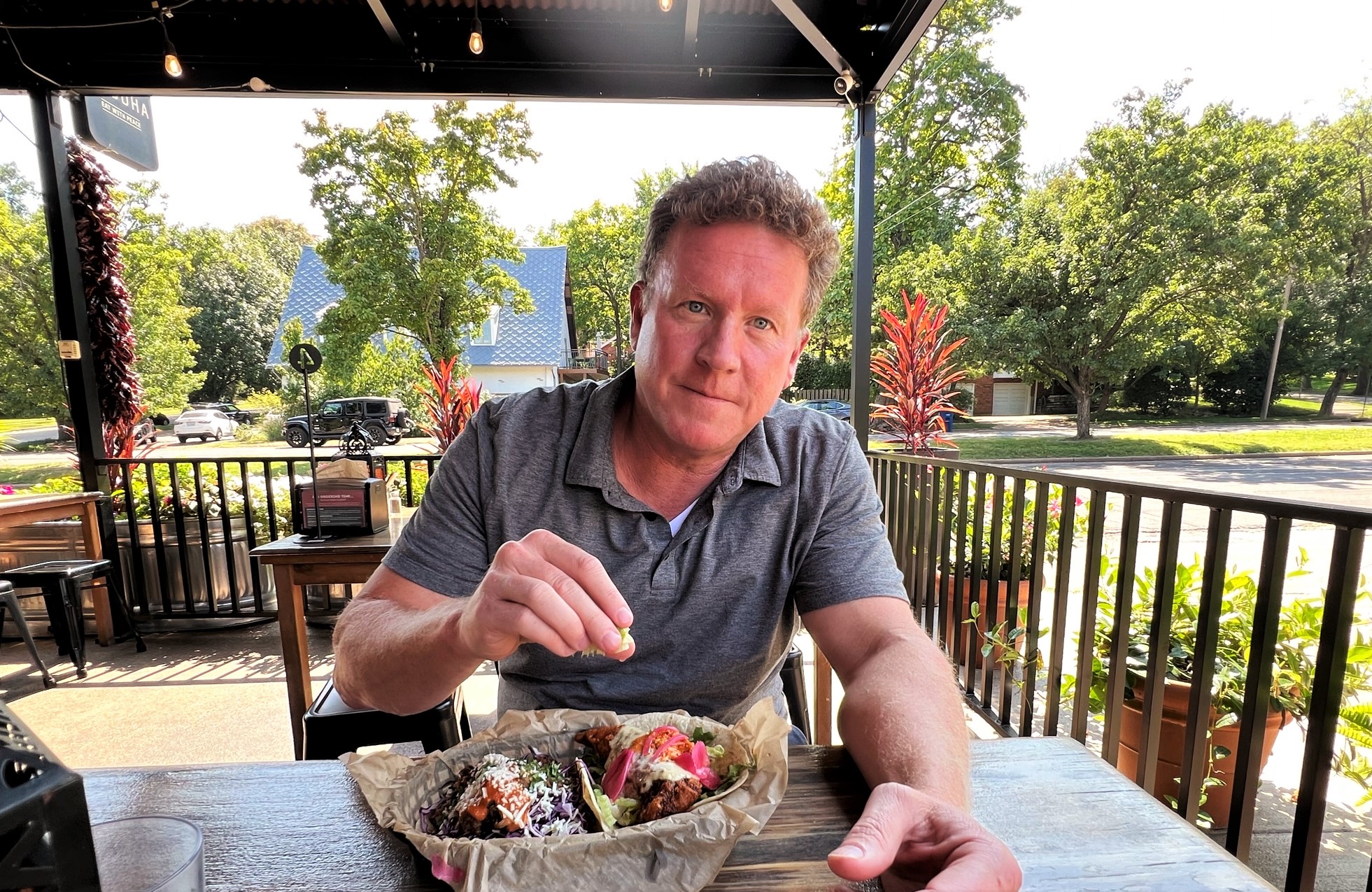 Tom caps his tacos with a squeeze of lime.

When my two tacos arrived—which they did quickly—I recalled how messy they were to eat. Though each taco comes swaddled in a double tortilla, there’s still some overflow. These are not skimpy tacos.

My choice this day was The Thailand Taco (shown above) along with The Baja, a flavorful fish version. My favorite—the fish—brimmed with goodness from the zippy sauce. 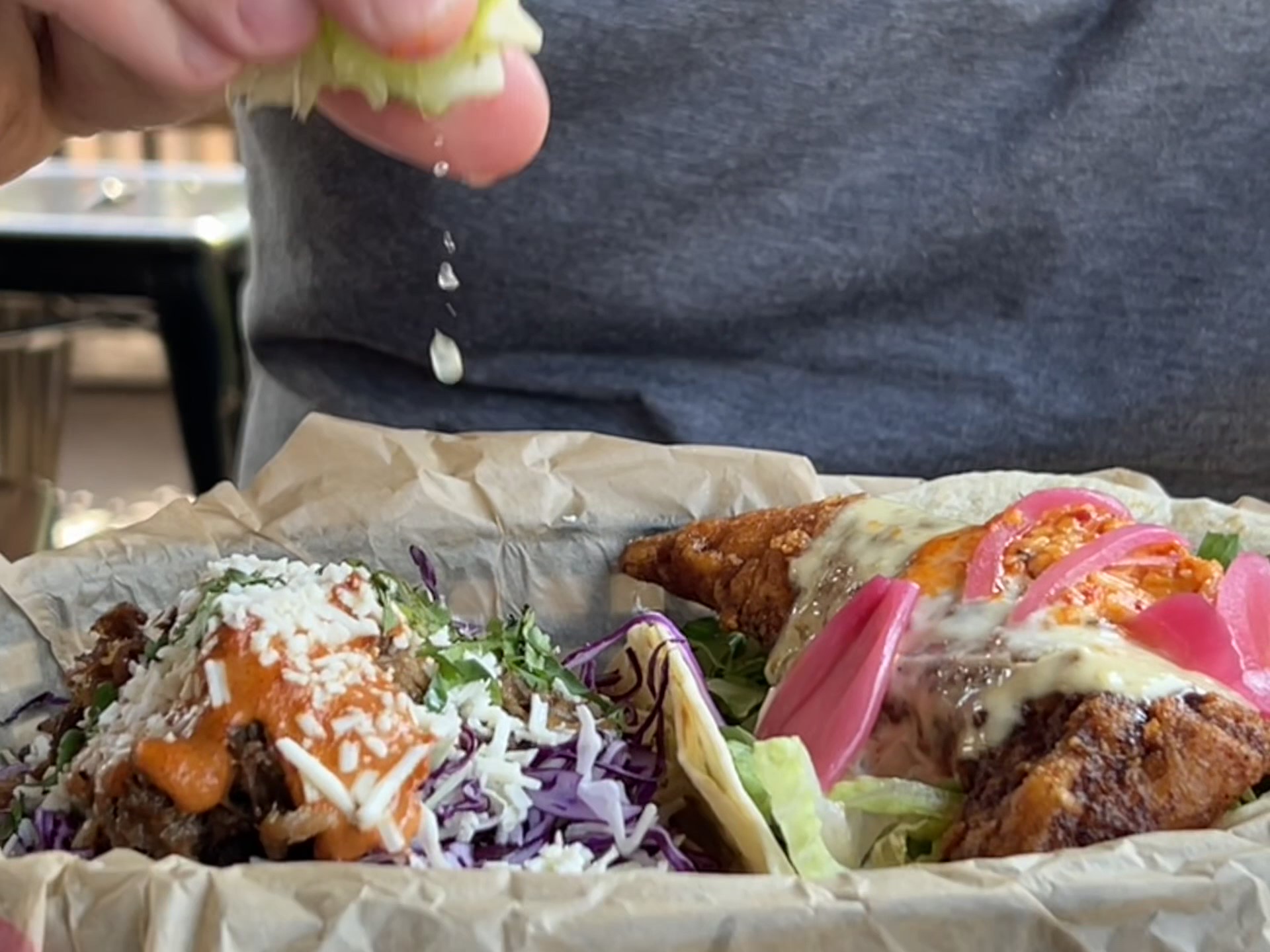 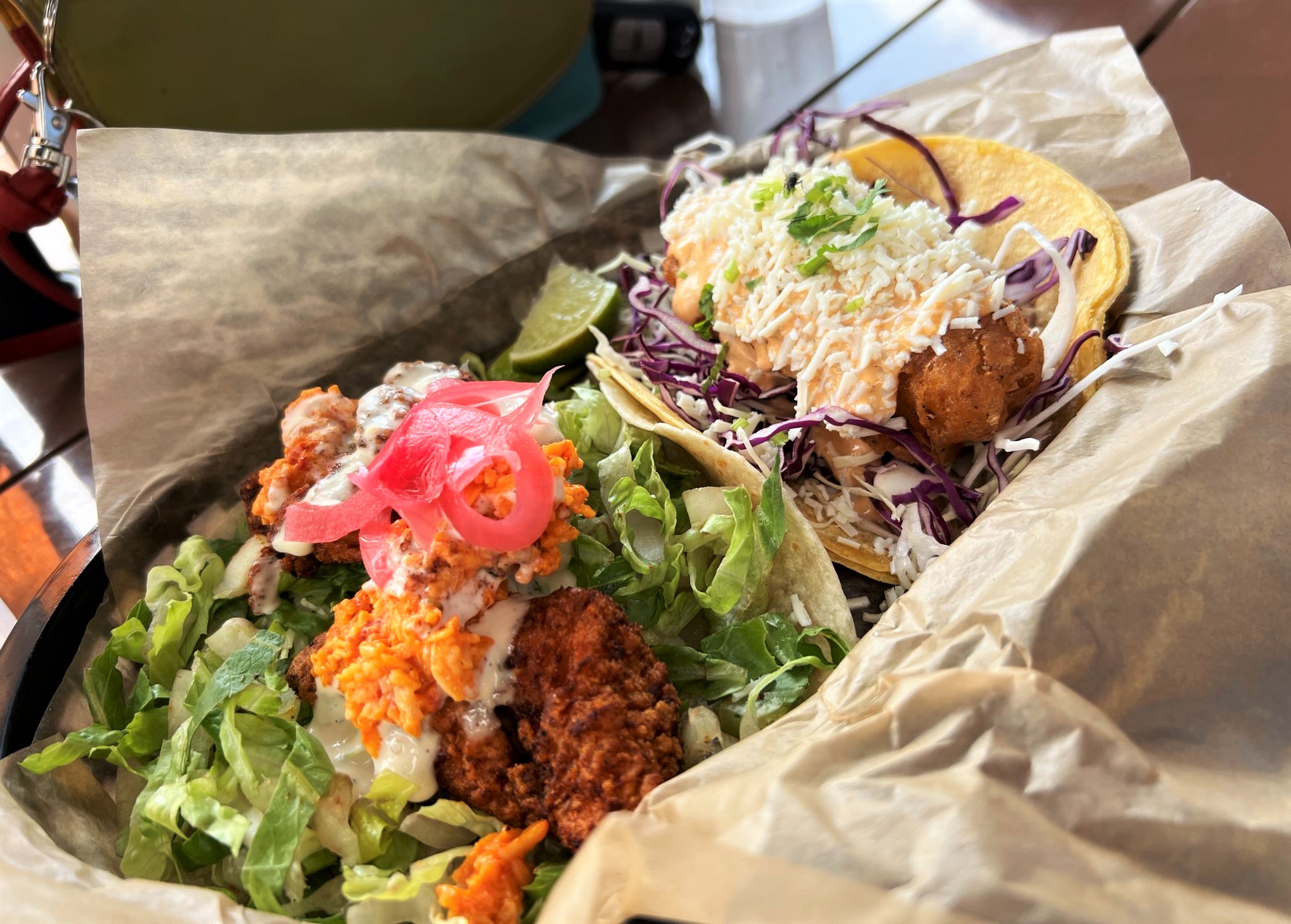 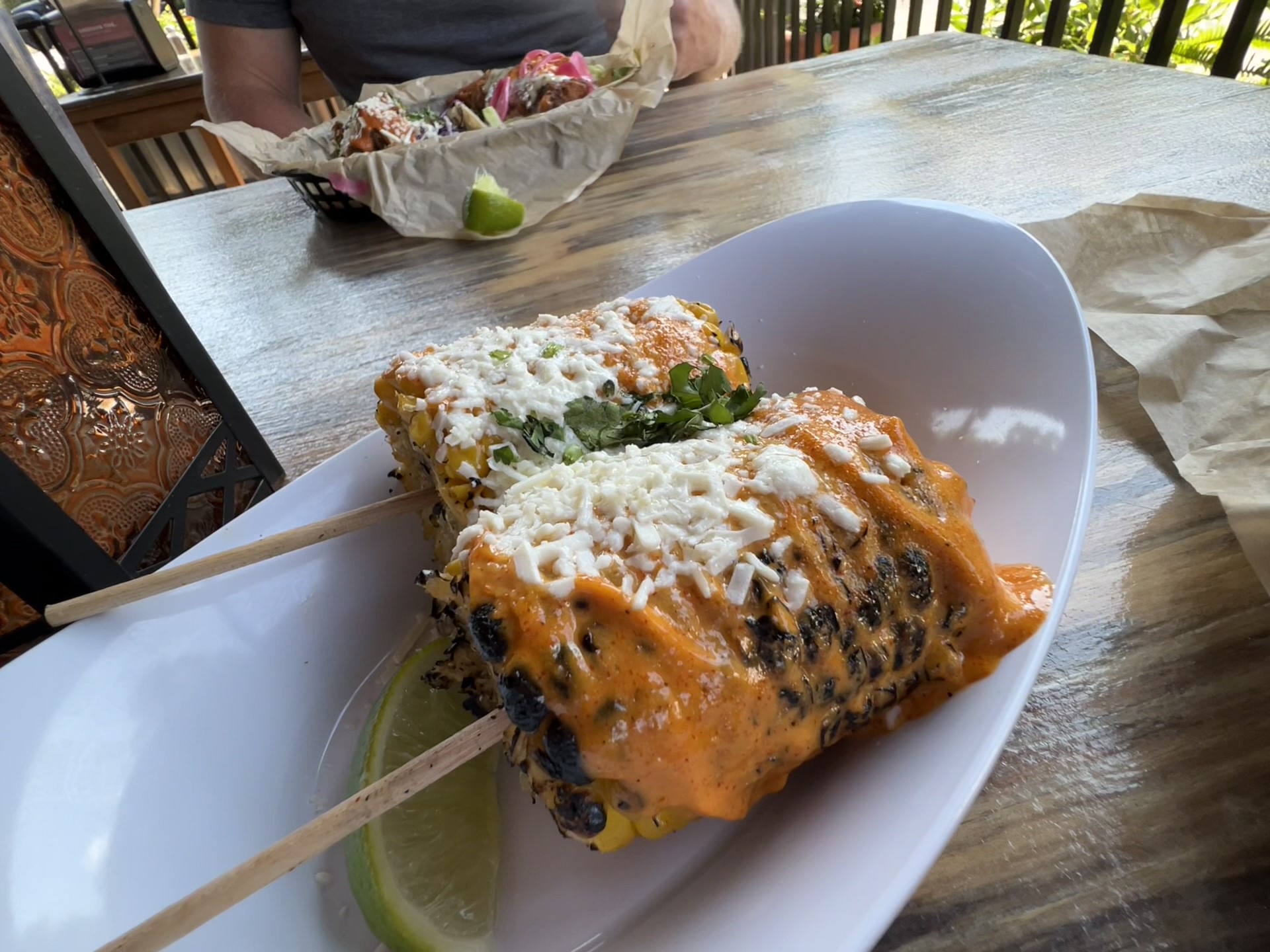 Pull Over on Pershing 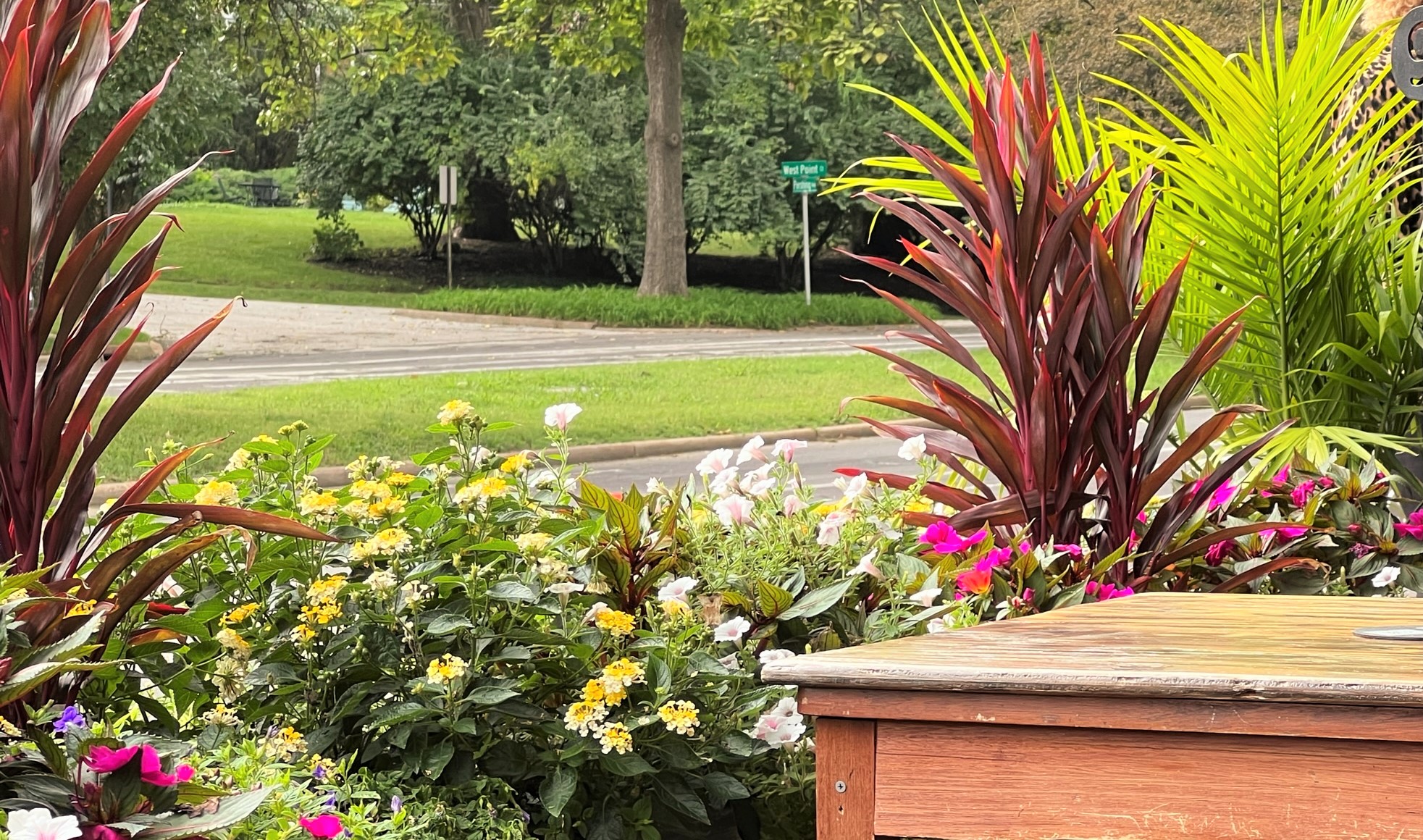 The floral lined patio makes for an inviting entrance. 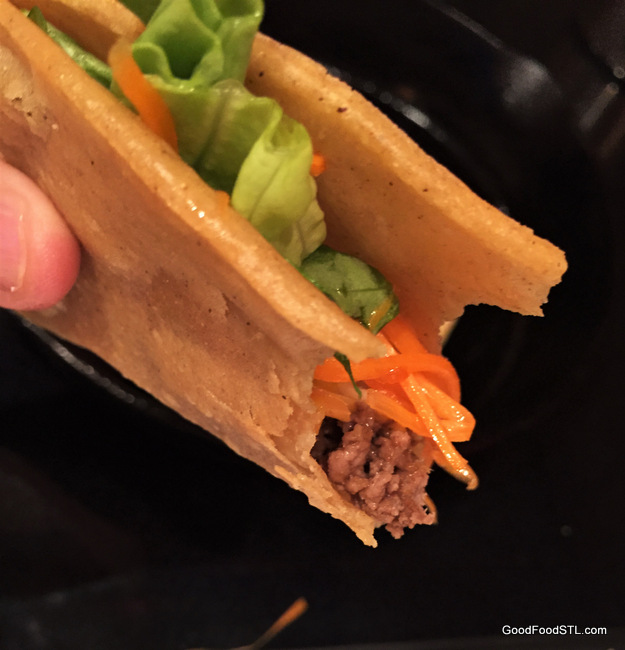 The last time I made tacos, I thought I had the seasoning on hand. I didn’t. Had I been clever enough to make a shaker full of the flavoring, it would have been easy to sprinkle onto the simmering beef. I’ll not get caught without again. 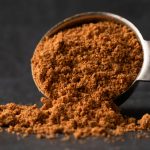 Mix all ingredients together and store in air-tight container or jar with tight lid.