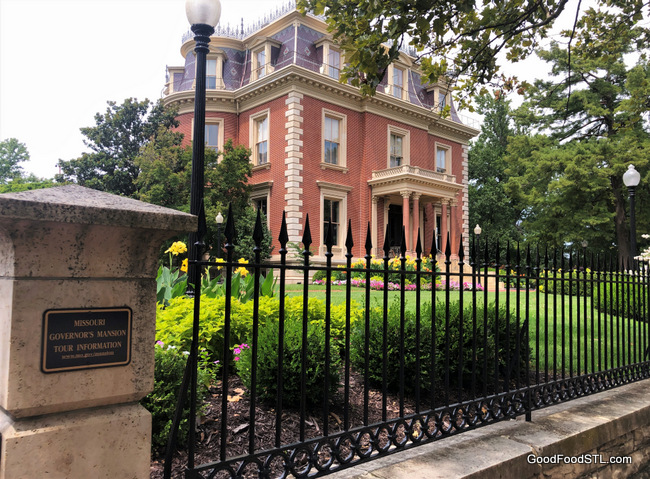 The Missouri Governor’s Mansion is especially beautiful when the flowers are in bloom.

On Tuesday Missouri had a birthday party in honor of our statehood. Two  hundred years ago, on August 10, 1821, President James Monroe signed a bill making Missouri the 24th state in the union. 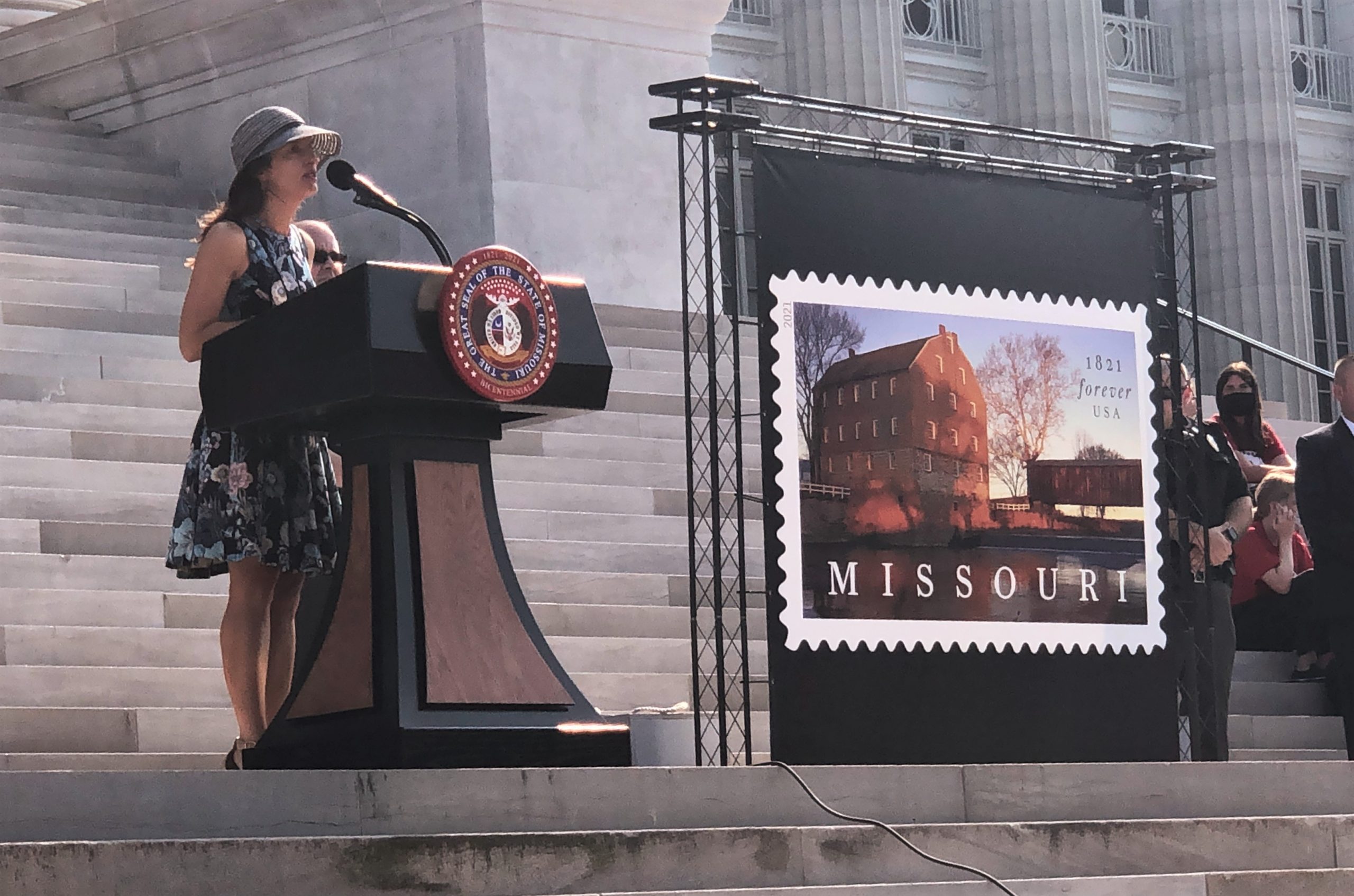 Jefferson City Mayor Carrie Tergin along with the Missouri stamp issued to commemorate the state’s birthday. The stamp features the Bollinger Mill State Historic Site and the Burfordville Covered Bridge. 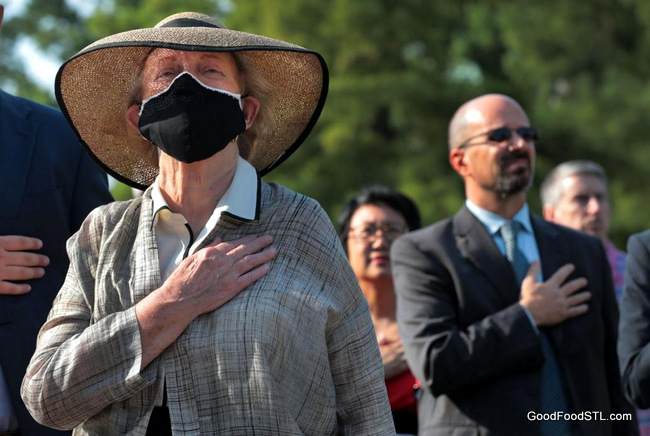 I join in the singing of the Star Spangled Banner at the event on the South Lawn of the Capitol. (Photo: Robert Cohen, Post-Dispatch) 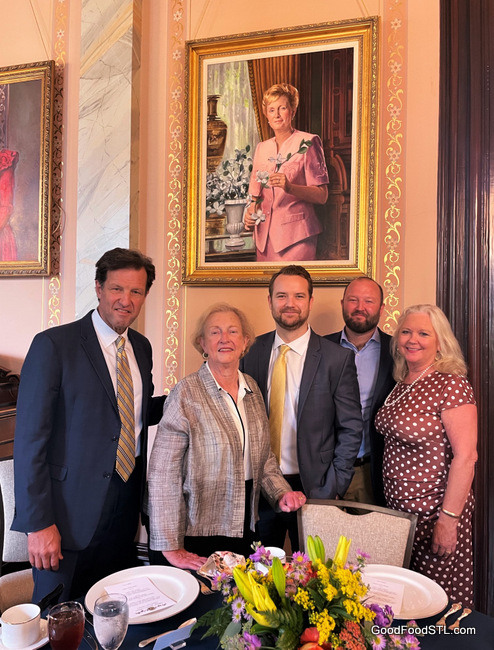 Gov. and Mrs. Parson hosted a lovely lunch at the Mansion for state-wide office holders, Missouri Supreme Court members, and other former elected officials attending the celebration. Not all my family was able to be there, but we had some. Russ, Jean, Andrew, Austin, and Deb Carnahan, shown here posing beneath my portrait, that hangs at the Mansion along with other First Ladies. 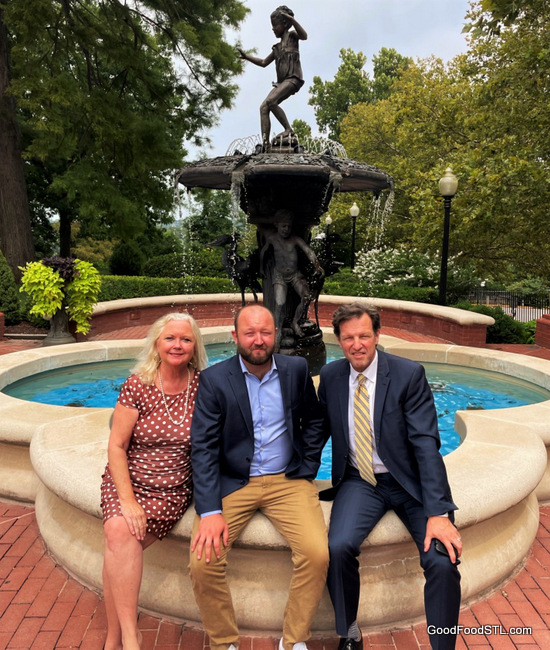 My grandson, Austin, poses with his parents on the fountain plaza in front of the Mansion. Austin was the model for the 7-year featured on the Missouri Children’s Fountain created by sculptor Jamie Anderson of Rolla. 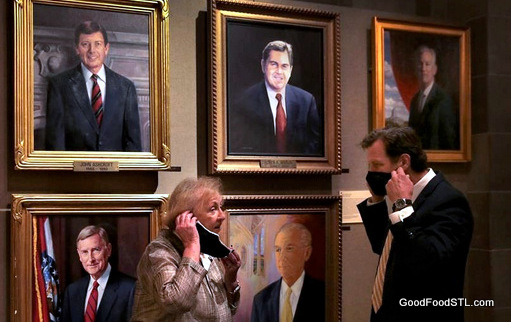 Russ and I return to masking after viewing Mel’s portrait (far left) that hangs among the other Governor’s of Missouri in the State Capitol. (Photo by Robert Cohen, Post-Dispatch) 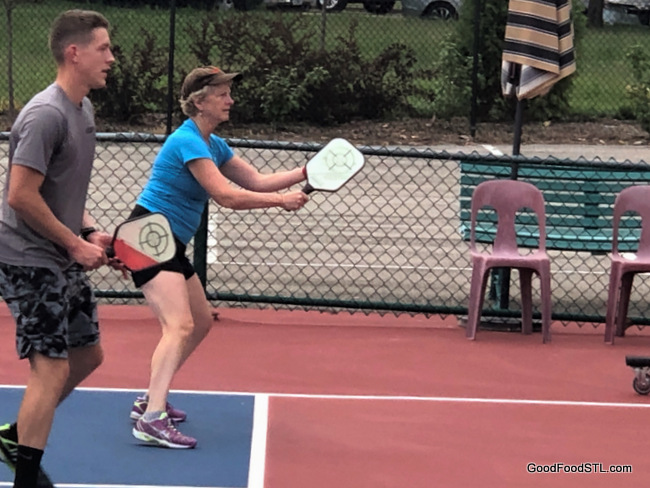 Robin poised for the serve that’s coming her way.

No Pickles Were Harmed in Playing This Game

I was invited to a Pickle Ball game last week. If you don’t recognize this non-Olympic sport, it’s best described as a cross between ping pong and badminton played on a court. The net and court are smaller than tennis, but the rules are much like ping pong.

I thought that any activity named after an edible, made it fair game for a food blog. 🙂 So here goes . . .

It’s believed the game originated in the 60s and named after the inventor’s dog. For years it was played primarily in the Pacific Northwest. Some recall the game as Paddle Ball popular in the 70s. 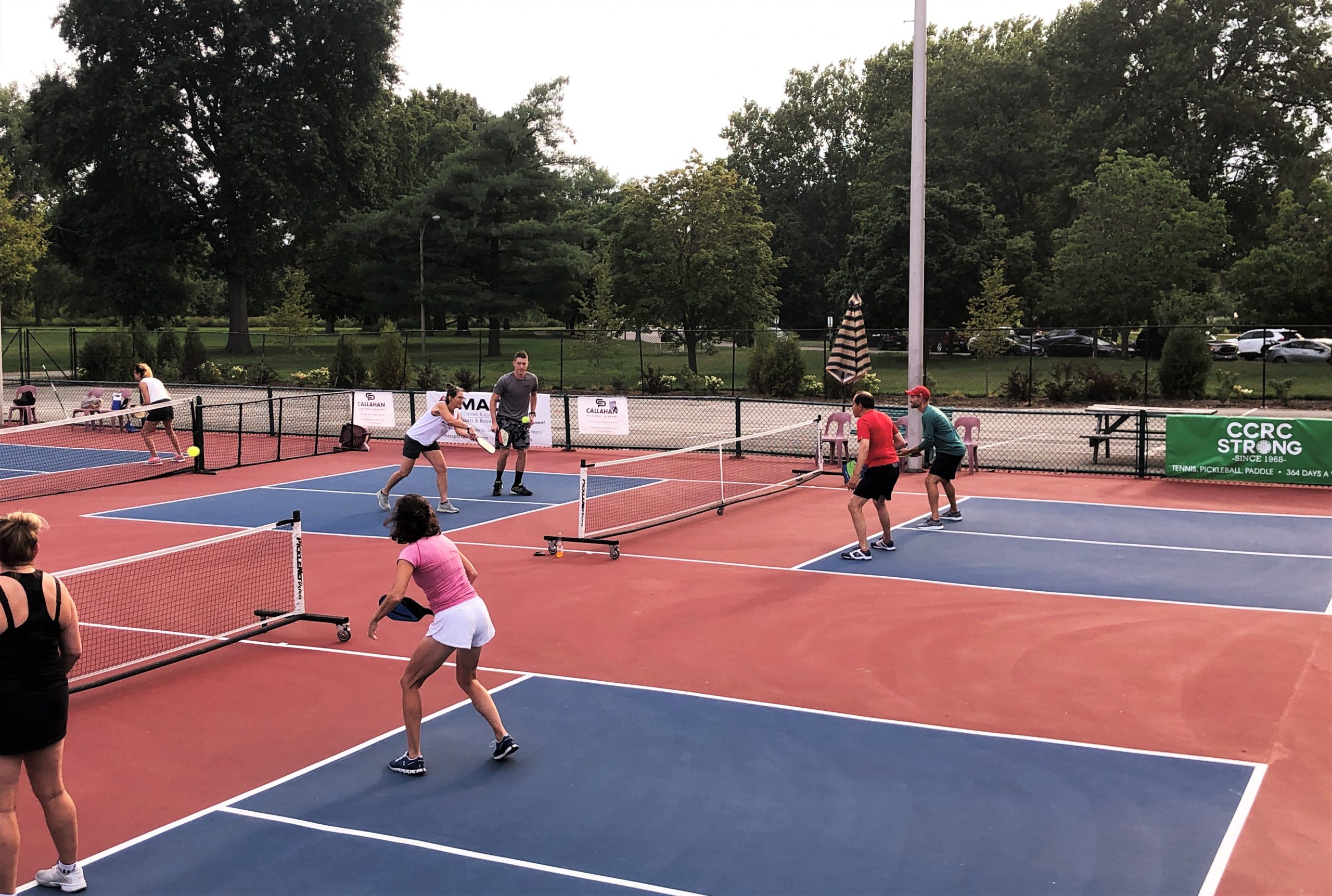 There are four courts in Forest Park that can be reserved for play.

Picklers Not Easily Jarred by the Game

As in pick-up basketball, Pickle Ballers are an enthusiastic lot and quick to befriend others wanting to play. Some say it’s the “lazy man’s tennis;” others, that it requires a high degree of accuracy and concentration. Who am I to judge?

Any Game That Includes Eating Has Merit

Our group included Robin and JC, and friends Inda and Michael. Inda provided her yummy chocolate chip cookies and carryout from Al Tarboush, the Lebanese deli in the Loop. My sandwich—the Shish Taouk— featured an enormous pickle swaddled in marinated chicken, and garlic paste—the pickle making it appropriate for the game, as well as delicious. Oh, yes, there was hummus and baklava as well. 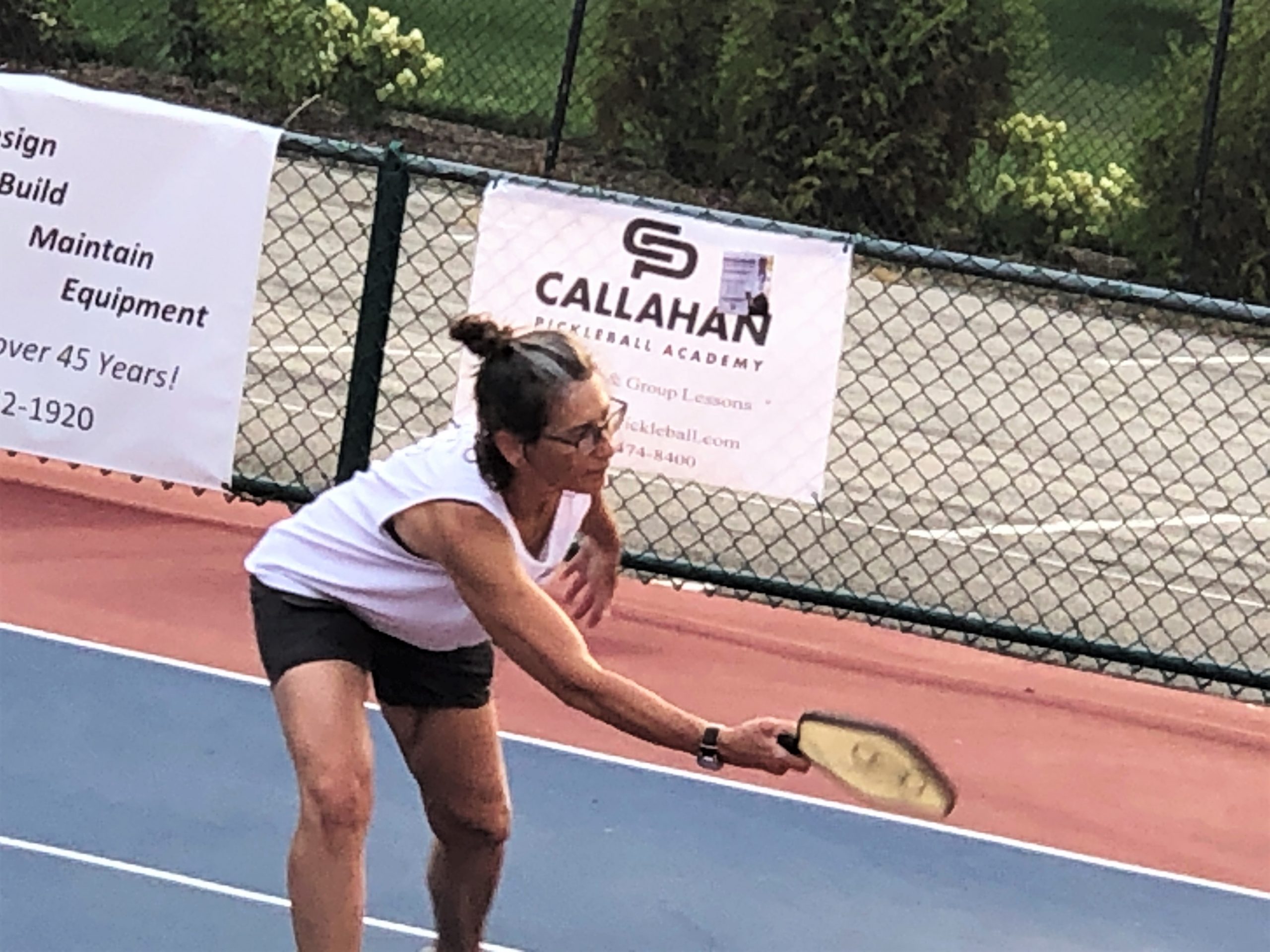 Inda snags a return shot. The ball used in the game has holes much like a whiffle ball. 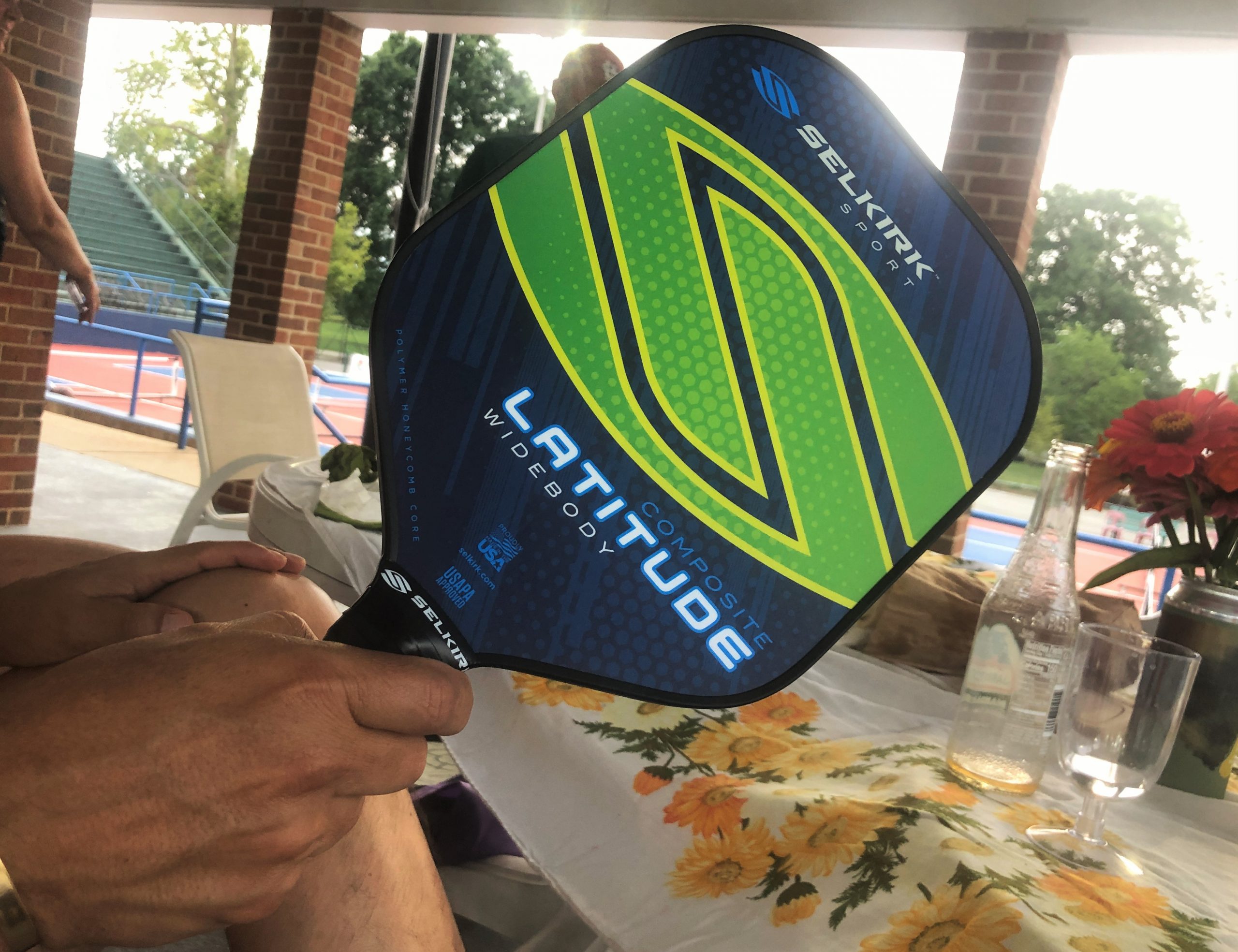 The firm, colorful paddle looks like an oversized fly swatter.

Is This Non-Sport for You?

The age range for Pickle Ball spans a number of decades. I would have played except my shorts from the 70s are not brief enough for me fit into  appropriately—though, frankly,  there may be other reasons as well for being a spectator rather than a participant. 🙂

Pickle Ball may never have its own national league or stadium, but the players do have fun, eat well, and enjoy socializing outdoors.

I may get me a cheerleader costume. Now if I can just mange to do a split while holding a couple of pom poms . . . I’m practicing. 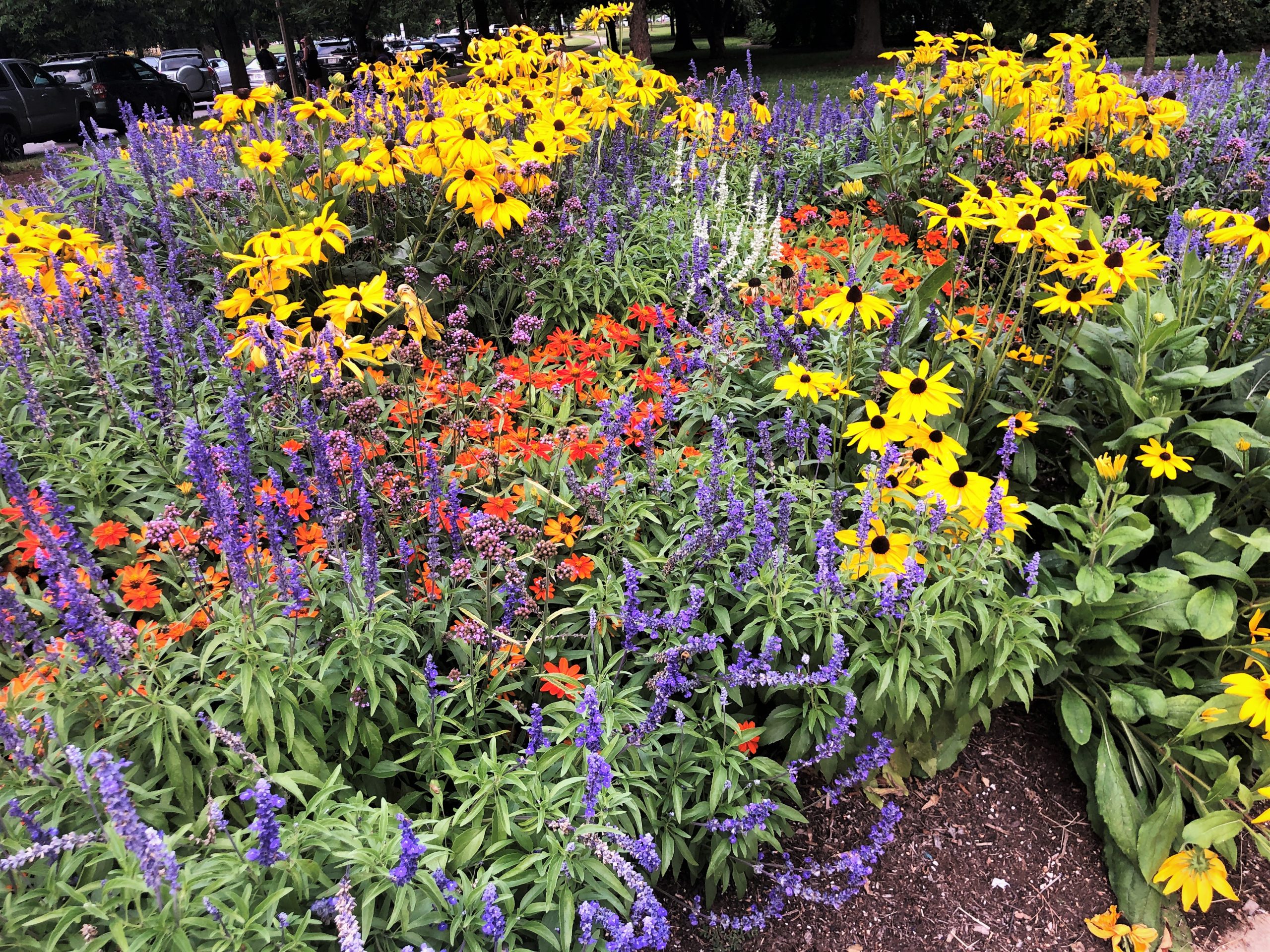 At the entrance of the Pickle Ball courts in Forest Park you get a whiff of summer along with your workout.