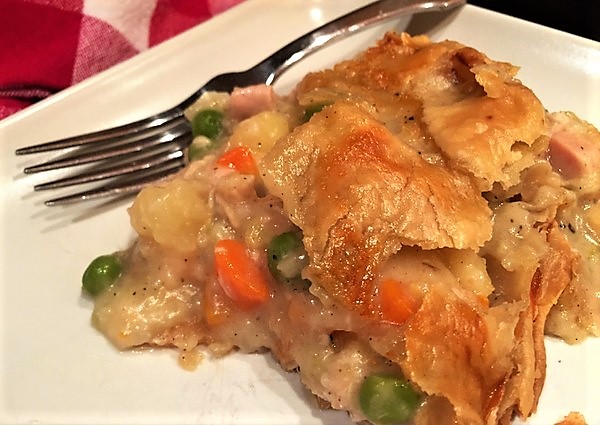 A soothing taste of an old favorite: Chicken Pot Pie.

A friend sent me a note about Ina Garten’s new cookbook (her twelfth), entitled Modern Comfort Food. I was thrilled by the news! As a reader of this blog, you know that I often cook Ina’s recipes.

When the note arrived, I was just putting my own dish of comfort into the oven: Chicken Pot Pie.

Anyone making this casserole would benefit from having a sou chef in the kitchen to help with the chopping and preparation of sauce, vegetables, chicken, dough, and egg wash.

None of these steps is hard, just time consuming. It took me the best part of the morning to get the casserole in the oven.

Now I know why so many people go for Marie Callender’s tasty, frozen version. But what else do I have to do these days besides play hide and seek with the virus? 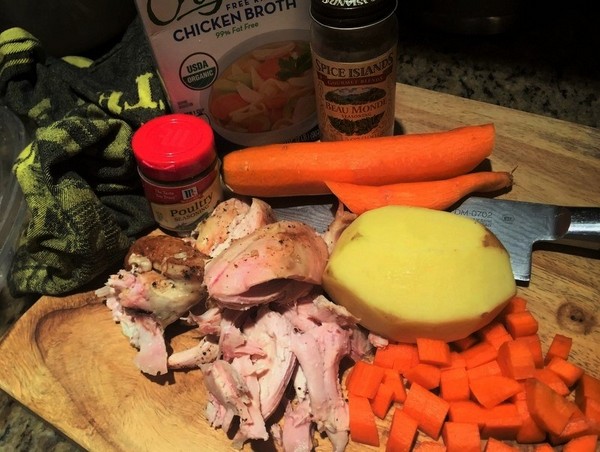 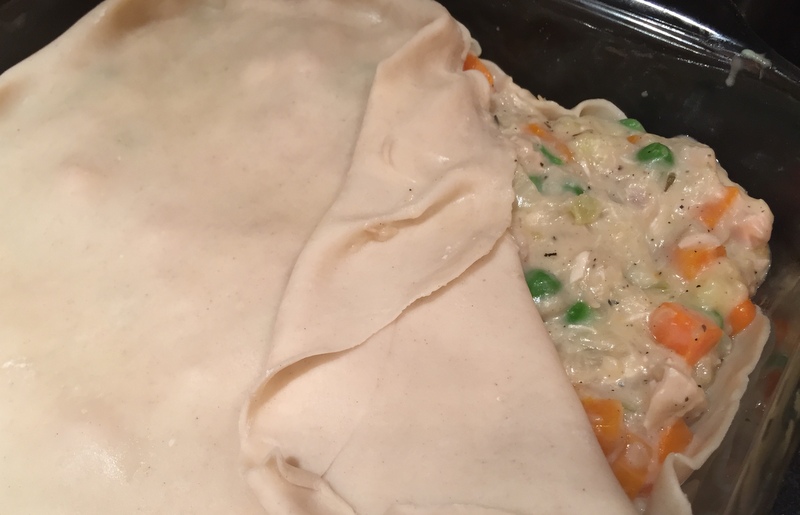 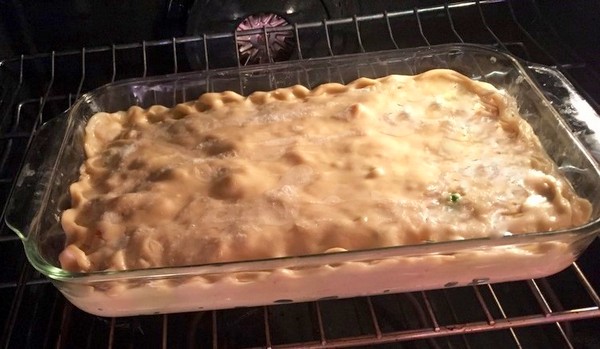 Into the oven for 30 minutes.

My mother used to make her pot pies entirely from scratch. In recent years, I’ve taken shortcuts. I use a rotisserie chicken and a Pillsbury roll-out pie crust.

I also add a bit of grated cheddar cheese and a jolt of hot sauce.

Some prefer their pot pie to set up enough to cut smoothly, while others like a thinner sauce. Just add less flour and more liquid, if you want a thinner consistency. I use just a 1/4 cup of flour rather than the 1/2 cup called for in the recipe.

In my haste to get the casserole into the oven, I nearly forgot to smear the top layer of pastry with an egg/water wash. Don’t skip this part! The egg-wash gives the top a crusty, golden color—as you can see in the photo below. 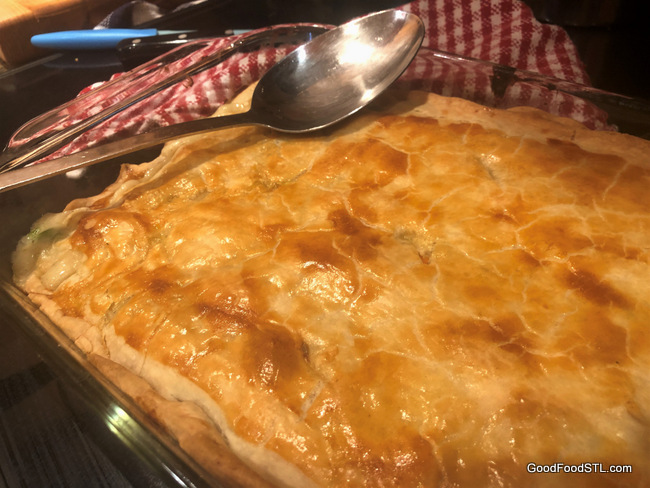 Tasty as well as picture perfect! 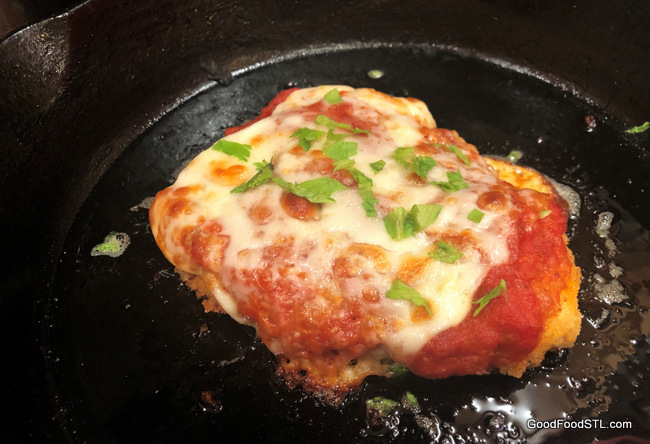 Chicken Parmesan, as good—or better—than I’ve had at most restaurants.

I have far too may chicken parts in my small, condo freezer. I didn’t intend it that way. It all happened when my Instacart shopper brought me six chicken breasts instead of the two I wanted. (He also threw in three large chunks of fresh ginger, when I only needed one small piece for another dish. My daughter says to just freeze the extra, that it grates easier when frozen.)

Time to Get Mean with Those Chicken Pieces

Start your Chicken Parmesan by putting each piece into a plastic baggie and pounding the daylights out of it with a rolling pin or mallet. You want it flat and thin, about 1/4 inch.

Next, bread chicken, by first dipping pieces in seasoned flour, then egg, and, finally, the bread crumbs/grated parm mixture. (I use Italian-seasoned Panko for the most crispiness and flavor.) Cook the pieces in a bit of oil in a skillet for several minutes on each side. 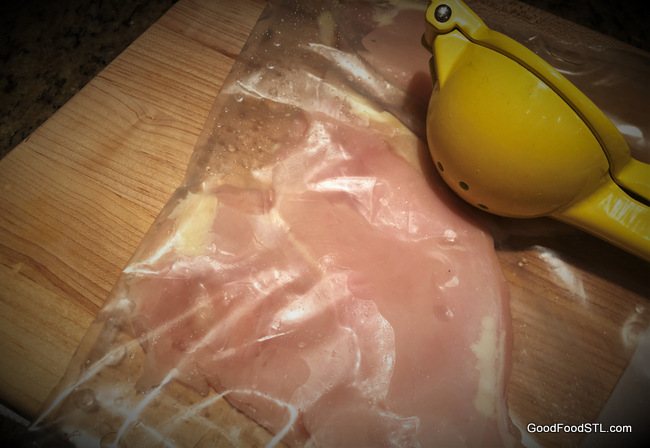 Having no blunt instruments in my kitchen, I used a metal lemon squeezer to smash the chicken breast to size. 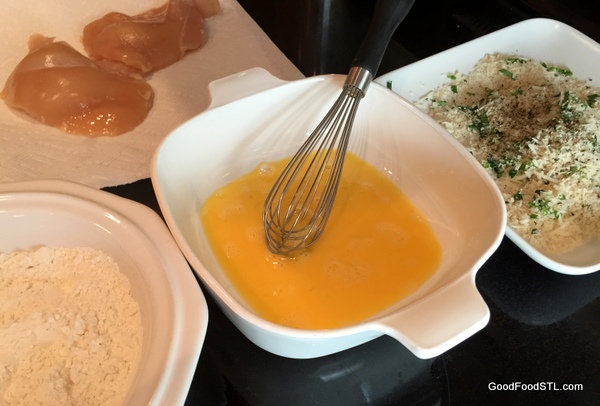 Then I set out bowls for dipping and coating the chicken pieces. 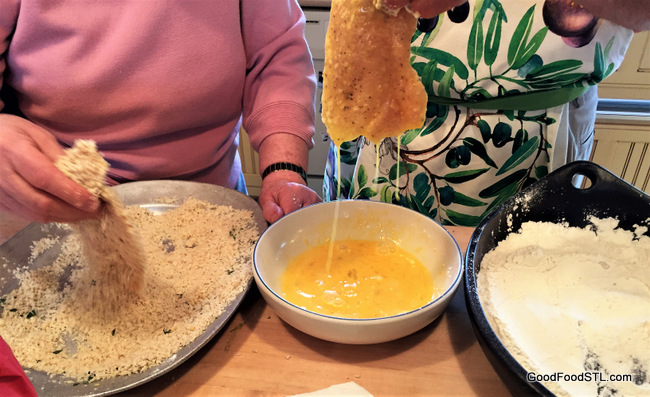 This is the messy, fun part. 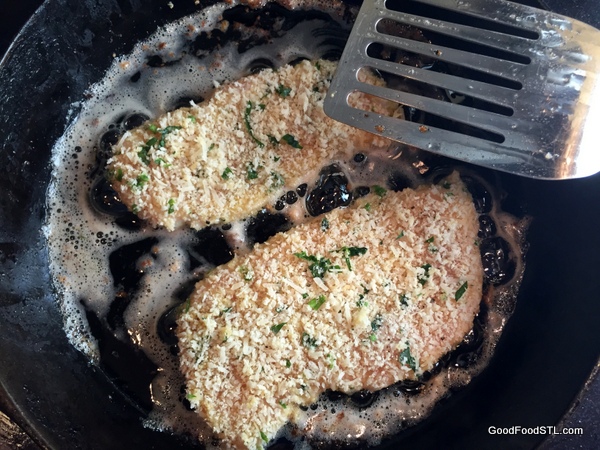 If you want to test for doneness, stick a meat thermometer in the chicken. It should read 165 degrees. Don’t overcook.

Top with spaghetti-tomato sauce (you can make your own, but I use Rao).  Add a slice of Mozzarella or Provolone to each piece and bake until cheese is melted. Fresh Mozzarella slices also make a nice alternate topping. If this recipe sounds familiar, it’s because eggplant parmesan and veal parmesan are made much the same way. 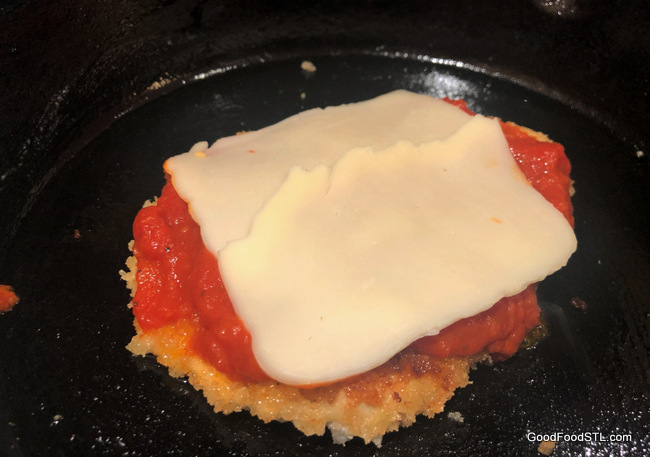 After adding the sauce and cheese, I wiped out the cast-iron skillet in which I browned the chicken breasts and baked the cutlet in the oven for 10 minutes at about 400 degrees. (Every recipe I read had a different time and temperature. But you just want the inside to be 165 degrees and the cheese melted.) If making more than a few servings, it’s best to use a large baking dish.

Ready to serve over a bed of sauced noodles along with a side salad.

This dish is perfect for freezing. After giving the chicken pieces the flour/egg/crumb treatment, freeze until ready to use. Thaw and brown 3 minutes to a side and bake as indicated above.

Here’s a good post on all the steps. Ina Garten does a slimmed-down version, flavored with lemon, that forgoes the Mozzarella and tomato sauce.