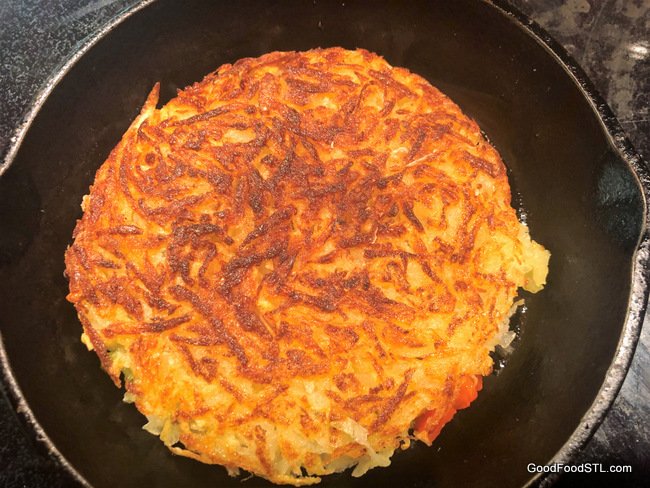 Crispy Hash Brown Potatoes, the perfect match for a cast iron skillet. For best results use Russet potatoes, from which you’ve squeezed the moisture. Dry and shred the potatoes. For a crispy result, spread them thinly into a hot, generously oiled skillet. (I added roasted red peppers and green onions, too.)

Some skillets today come pre-seasoned. But old ones—and some of the new—must be lightly rubbed with oil (preferably flaxseed oil) and treated in a 500-degree oven for an hour. (Good video for cleaning up old skillet here.)

Do You Have a Vintage Skillet?

Flipping over my 10″ skillet, I saw the bottom read Griswold #8. I’d never heard of Griswold—except for Clark. This was my mother’s skillet, for heaven’s sake. I couldn’t image she’d buy some knock off. So I did a bit of online research.

To my surprise, I discovered I have a vintage skillet! One likely produced between 1939 and 1957 by the old Griswold company, that made cast iron cookware from 1865 until the 1960s. The marking is know as the “small block logo,” (a cross within a circle with the words Griswold; below that, Erie, PA). 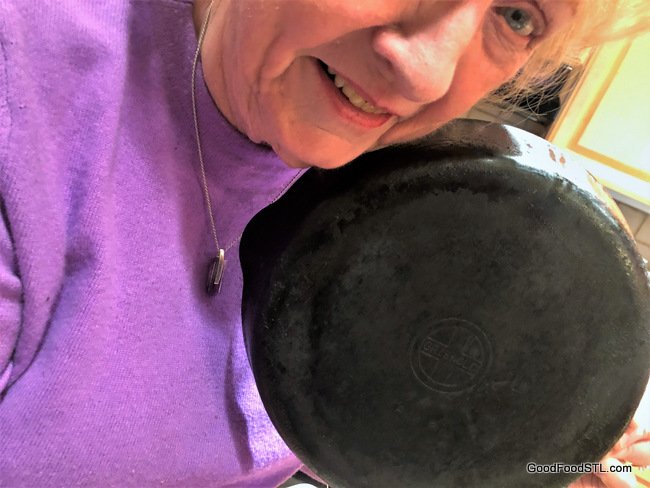 Wow! I was impressed that anything in my kitchen was more “vintage” than I am. Or worth more than my much-prized cache of saffron threads. Can’t believe they’re asking up to a $100 for a Griswold on eBay!

On the underside of my smaller 6″ skillet, however, I found only the words “Made in the USA.” That’s a sure signal it was produced after 1960, when Country of Origin was first required to be shown on manufactured goods. Likely it’s a more recent Lodge skillet. 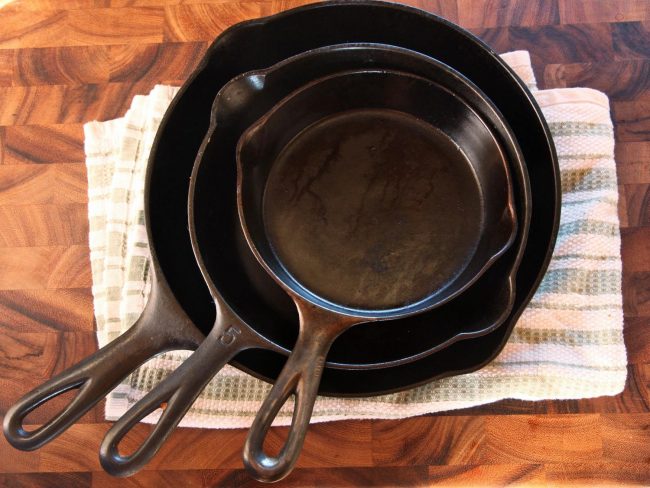 If you’re curious about your skillet markings, listen to this video or find yours skillet symbols among those listed here.

So what’s the best cast iron to buy today, if you don’t already have grandma’s old skillet?

There are two types available” (1) skillets seasoned and ready to go. They have a rougher surface because of the hardened polymerized fat that forms in producing a non-stick surface, and (2) the traditional non-seasoned skillet, needing one or more oven treatments. 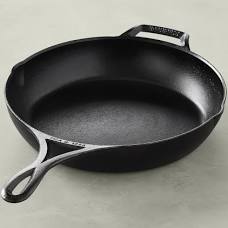 The folks at America’s Test Kitchen ranked cast iron skillets for ease in getting scrambled eggs, breaded chicken cutlets, seared steaks, and cornbread from the pan with little or no sticking. They were especially fond of the these two:

Field Company Best Smooth Surface. This is the Rolls Royce of today’s cast iron. Light weight with ergonomic main handle and helper handle, but no pouring spouts. The pair sells for $235. Ouch!

No matter how disgusting a cast iron skillet gets, if cleaned and re-seasoned properly, it makes an amazing comeback.

But a family camping experience years ago, caused me to lose faith in cast iron for awhile. When we went to set up our tent at Hungry Mother State Park in Virginia, we couldn’t find the hammer.

Trying to be resourceful, I suggested using the cast iron skillet we’d brought along for breakfast the next morning. Well, one whack on a metal tent peg proved to be too much even for a virtually indestructible cast iron skillet.

We later found the hammer, but for breakfast the next morning we had to settle for cold cereal.