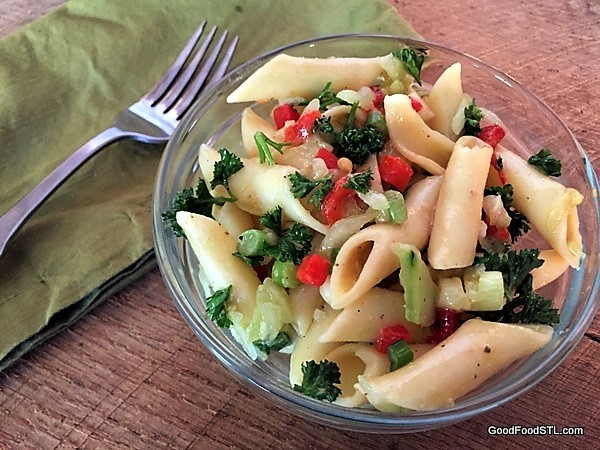 I included Mostaccioli Pasta Salad in the cookbook I wrote in the nineties, when I was First Lady of Missouri.

Years ago a friend went to a cooking class and came back raving about a dish called  Mostaccioli Salad. The word mostaccioli means “little mustaches,” she said, and describes the 2-inch-long macaroni tubes cut on the diagonal.

She gave me the recipe with the warning that it would “feed an army.” Well, not quite. But it does fill my cake mixing bowl to the brim and feeds a dozen or more. (It can be halved.) The ample amount and colorful display make it perfect for a festive meal

A Cool Salad for a Warm Day

As you read the recipe, the first thing you’ll notice is that it contains a cup of shredded cucumber. I’m not wild about cukes, but in this recipe, I have no problem, because they’re not overpowering. Besides you probably have one or two cucumbers lingering in the fridge eager to compliment this extraordinary dish.. 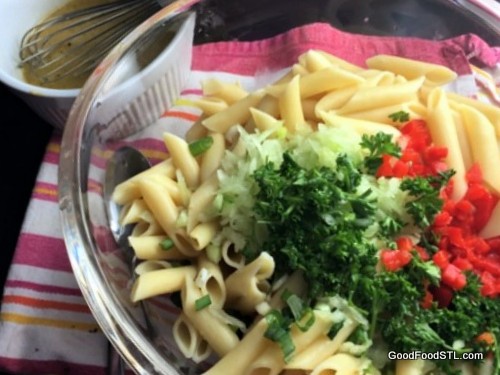 Make Ahead Is Best

Be sure to make the pasta salad ahead of time and refrigerate overnight, or even longer. This noodle dish is sturdy enough to holds up well for several days, but it seldom lasts that long. It’s one of those salads you tend to pick at when you open the refrigerator door. 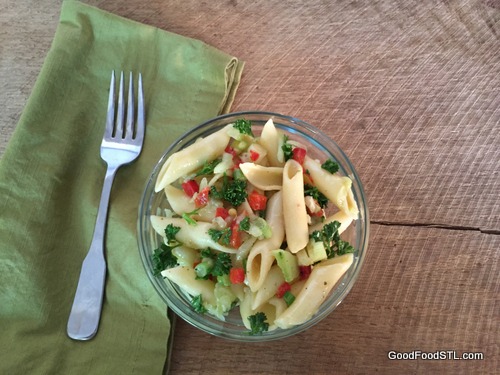 I’ve seen variations on this recipe that call for more than a cup of sugar! Thankfully, this one requires none and I’ve never noticed the omission. But, if you must, you can add a bit of sugar to the dressing. Either way, it’s a classic recipe and a dependable one to have in your arsenal of late summer salads.