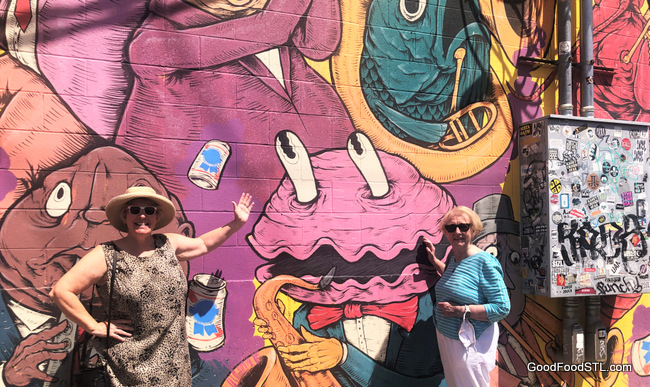 With my fun-loving friend, Sally, admiring the art work on the exterior walls at Broadway Oyster Bar. (BOB) 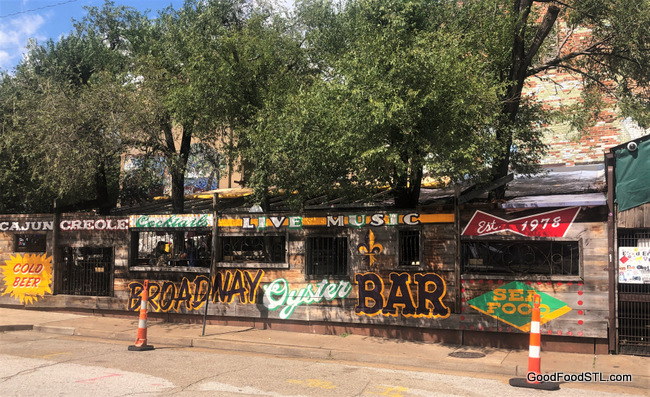 The edgy vibe at the graffiti-chic Broadway Oyster Bar comes with honest-to-goodness Creole/Cajun cooking. Curbside pick up is available.

Sally and I had a hankering for some authentic N’awlens grub: gumbo, jambalaya, étouffée. But NOLA, the mecca of Creole/Cajun cooking, was 700 miles away. Fortunately, there’s a good alternative within blocks of the Arch: BOB—the abbreviated nickname for Broadway Oyster Bar.

Off we headed to the funky, seafood dive, that’s won a number of readers’ polls and accolades. In 2015, BOB was named the “Restaurant of the Year,” by the St Louis Chapter of the Missouri Restaurant Association.

The food and atmosphere are bold, authentic and memorable. I’ve never tasted anything quite like the Alligator Sausage and Shrimp Cheesecake appetizer. It alone is worth the trip. The Jambalaya and Fish Taco combo was as good as I’ve had in NOLA. 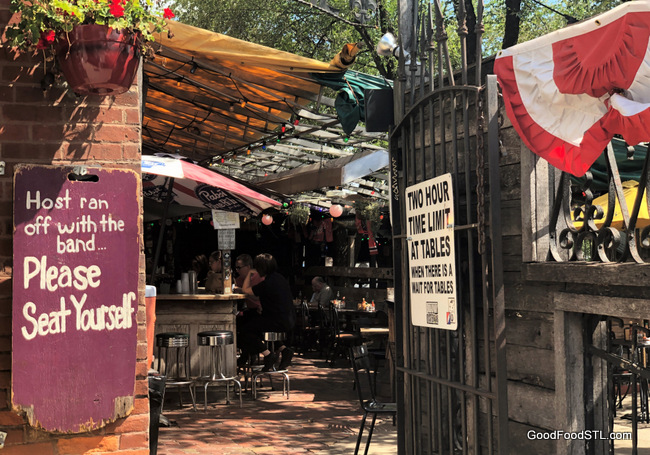 I took this photo pre-COVID. The runway host must have returned, because the sign is no longer there.

A Patio Fit for a Pandemic

We took a seat on the patio next to one of the grilled-covered windows, that open onto the noisy mid-day traffic. I’m used to the screeching cars and passing trains at BOB, but this day there were also jackhammers outside the patio. I tell myself, that’s all part of the ambiance of downtown dining, easily ignored when the food arrives. 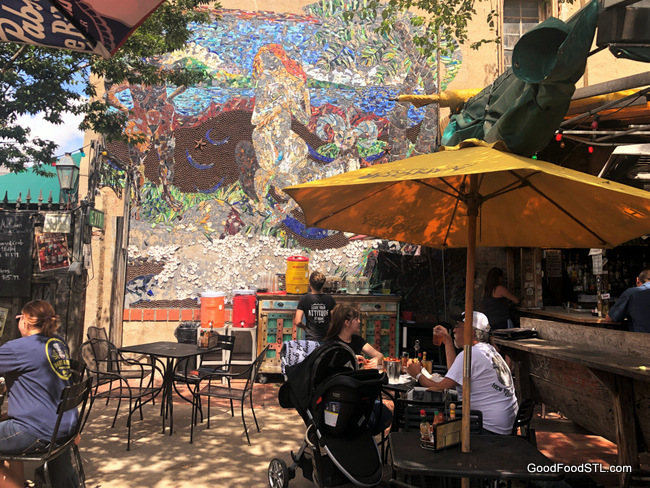 The spacious patio is far larger than the restaurant’s interior. (I’ve seen larger bathrooms on a 747.) Even so, BOB has been considered one of “St. Louis’ most beloved party palaces” for over 30 years. Sally and I didn’t party, but we did enjoy a great lunch despite the jackhammers. 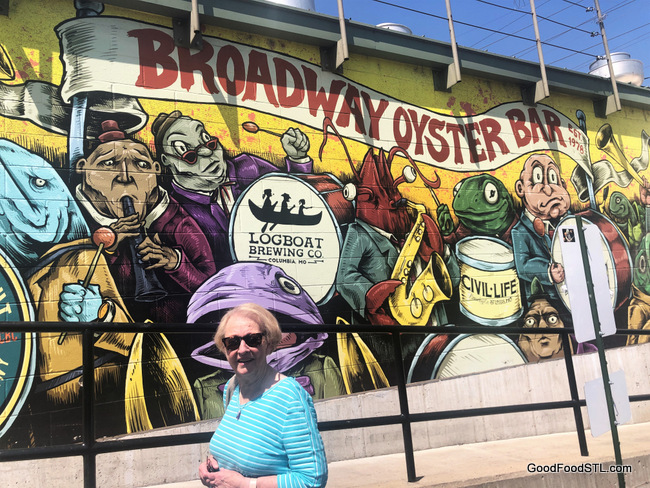 Ouch! The Purple-People-Eater looks like it’s about to devour my head. 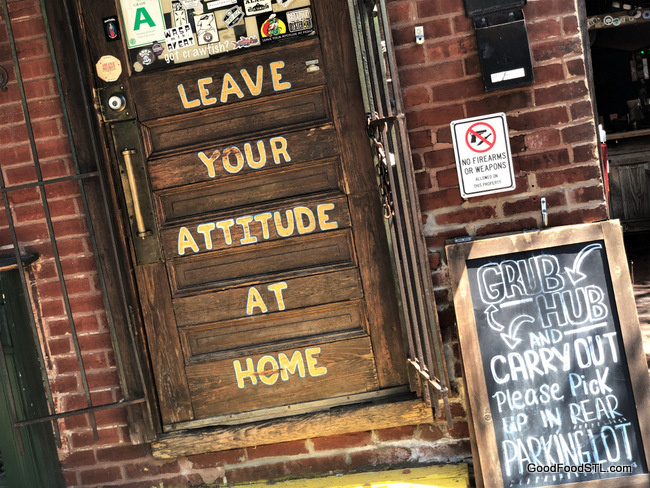 Not bad advice for any door. While the food warms your innards, the decor channels Bourbon Street. 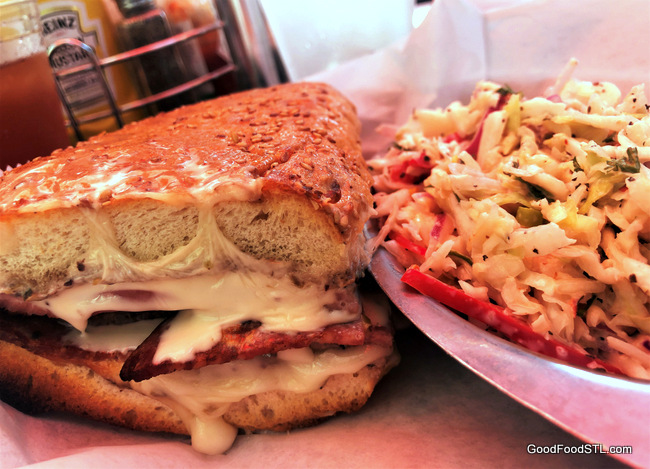 Muffuletta and Slaw. The classic sandwich was much like the ones made at Central Grocery in NOLA, but, sadly, absent the olive tapenade. 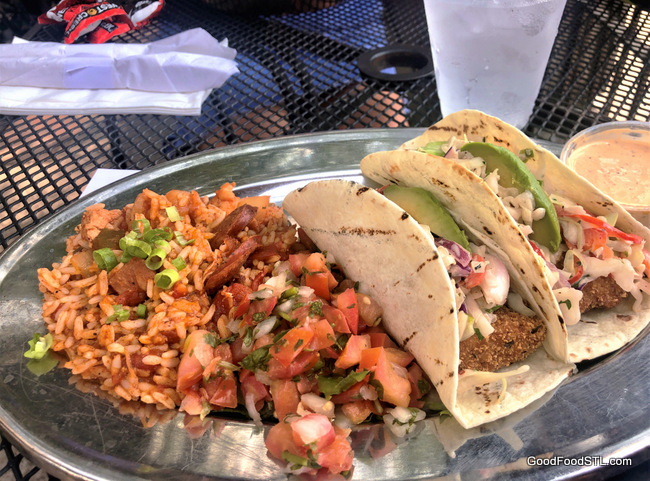 Jambalaya and Fish Tacos. Spiciness is geared to Midwestern taste rather than the hotter New Orleans style. The ample portions allow enough for a full meal, plus a take-home box. 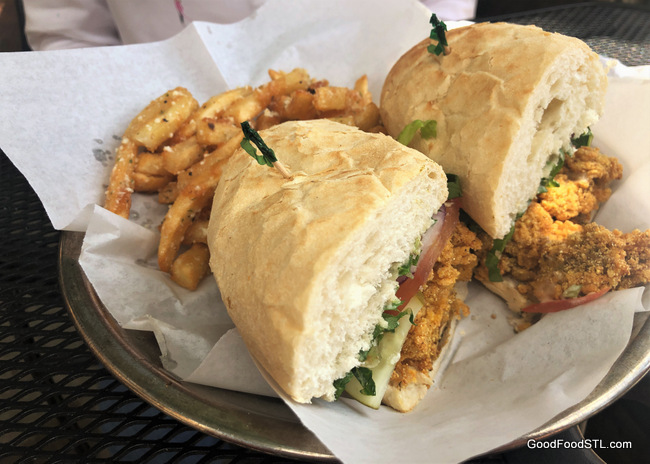 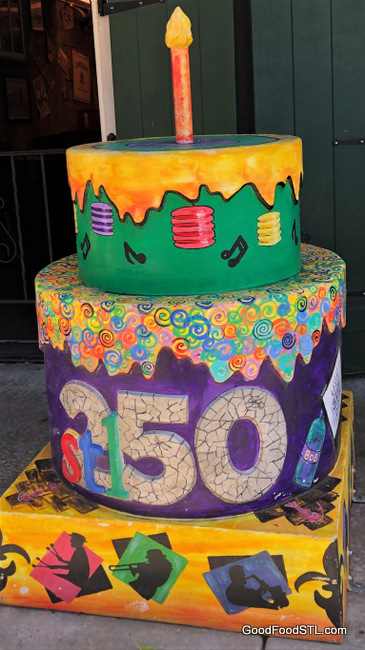 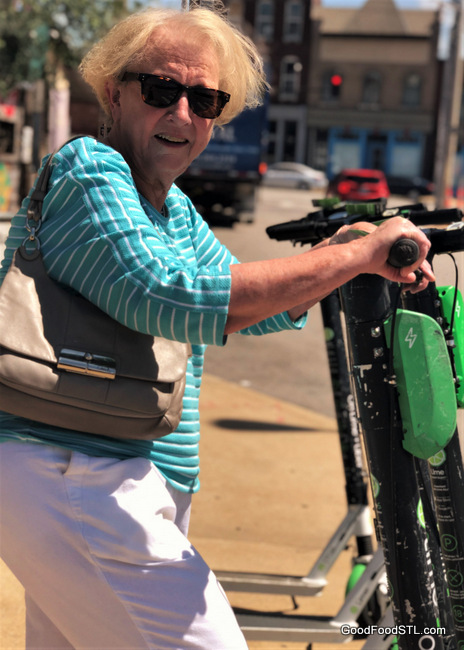 With one of the city’s Lime Scooters. I used to ride a scooter, when I was a kid. Hmm. . . could it be like biking—having once learned you never lose the know how? I decided it was best not to test the theory.

Broadway Oyster Bar. 736 S. Broadway. Hours: Kitchen opens every day at 11a. Kitchen closes Sun-Thu at 10p unless there’s a Cardinal home game that night and then open till 11p.  Fri-Sat kitchen serves till 11p. Bar open: Every day 11a-3a.