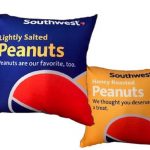 “What’d they serve you on the plane?” I asked a friend, who flew in from Florida recently. “Peanuts,” she said disgustedly. “It was BYOL—bring your own lunch.”

Hmm. . . I wonder if Richard Branson and his Virgin Galactic space travelers will fare better?

In the good ol’ days there was, at least, the semblance of an entrée midflight. Often the dessert was merely a cookie or brownie in a cellophane wrapper, but it was enough to keep your mind off a bumpy flight.

The best airplane food I ever had was on Korean Airlines. Passengers could select a four-course meal served with a full array of dinnerware and wines paired with each course.

From Fried Clams to Squirmy Octopus 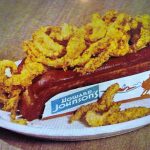 When I was a kid on vacation with my parents, we would search out the Howard Johnson locations on our AAA Trip-tik booklet. HoJo’s—as the tidy, roadside restaurant was known—offered cheap, tasty fare to travelers.

I was especially fond of the fried clam roll. There were 28 flavors of ice cream, but I stuck with chocolate, as I still do when buying ice cream today.

In Seoul, I was once served small octopus tentacles. They were still wiggling. When I looked askance, our host put some of the squirmy pieces on my plate and said, with no little pride, “Still moving; very fresh.” I dislike any fish so fresh, that it’s fighting back. Fried clams don’t do that.

For this post, I’m counting anything eaten away from home as “on the road.” So that would include hospital food. My most memorable, being the time I was served a dinner of mashed potatoes, cauliflower, and chicken breast slices. Everything was white! I started to ask for a parsley sprig, but instead I just closed my eyes and ate the bland meal. 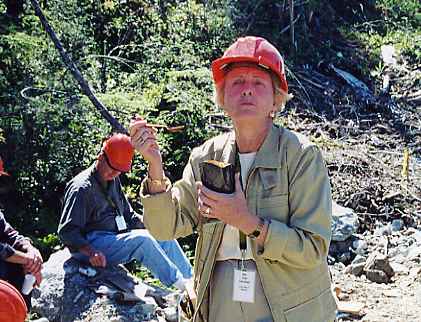 Tasting my first MRE in Alaska during the 90s.

While “on the road” in Alaska with the National Guard, I ate a MRE (Meal Ready to Eat). As I recall, I had the Chicken Tetrazzini, that was quite good. But I was cold, hungry, and tired so that might have influenced my assessment.

We warmed the meal pouches by using their accompanying “heater” placed vertically against a jeep tire. If you have to rough it, it’s easier with a sack of Chicken Tetrazzini. 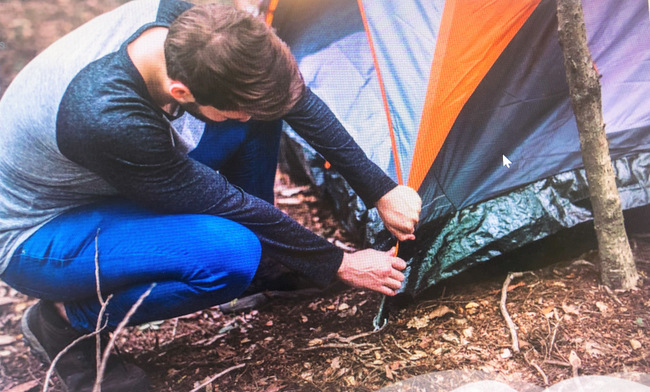 Putting up a tent is simpler than it was in the 70s.

I once camped at Hungry Mother State Park in Virginia along with Mel, three kids, a dog, and a tent that was too small. Nearly everything went wrong. It rained. Mel forgot the hammer and had nothing, but a cast iron skillet to drive the tent pegs in the ground. Of course, the pan cracked, which threw off our bacon-and-egg breakfast the next morning. We ate donuts from the convenience store. I never camped again. 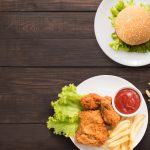 Fast food usually comes with enough salt, and or, sugar to satisfy most Americans looking for a quick roadside fix.

When I feel a bit peckish, I try to select a local restaurant that comes with reasonably good Yelp reviews. I don’t expect anything too exotic, but I often come upon some good, old-fashion cooking.

Even so, after eating “on the road” one time too many, I realize there’s no place like home. But the “road” experiences definitely make for some good stories.

« What Is Your Very Bestest, Most Favorite Restaurant?
What Would Life Be Like Without Homegrown Tomatoes? »