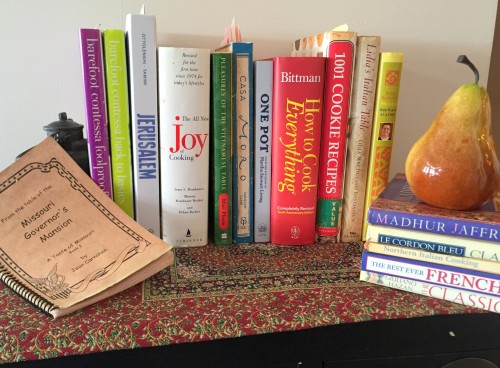 Just a few of the 75 or more cookbooks that clutter my shelves.

An Invite to Improvise

Sensing I needed yet one more cook book, I pre-ordered Sam Sifton’s new one, No Recipe Recipes. That seems like a misnomer since the NYT food editor offers a culinary trove of more than 100 recipes and photos. All are simple enough to be made from ingredients on hand or from those you can easily pick up at the grocery. 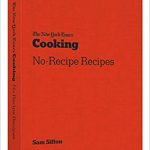 The bland cover design leaves a little bit to be desired, but the inside rocks.

The cookbook is written in a relaxed style, that makes you think cooking can be—as the French would say—au piff. Just a matter of eyeballing and sniffing. Ingredients are sometimes no more than a “glog of olive oil” or a “handful of onions.”

Now, I’m mostly a recipe devotee, but I was intrigued by the simplicity of Sam’s  no-recipe Baked Pork Chop and Onions. It reminded me of one that I used to make when I was cooking for seven each day. It sparked a flame.

Sam writes much like a friend, giving you a recipe that you just asked for. The  conversation might start with, “Oh, honey, it’s so simple you don’t need to write it down.” 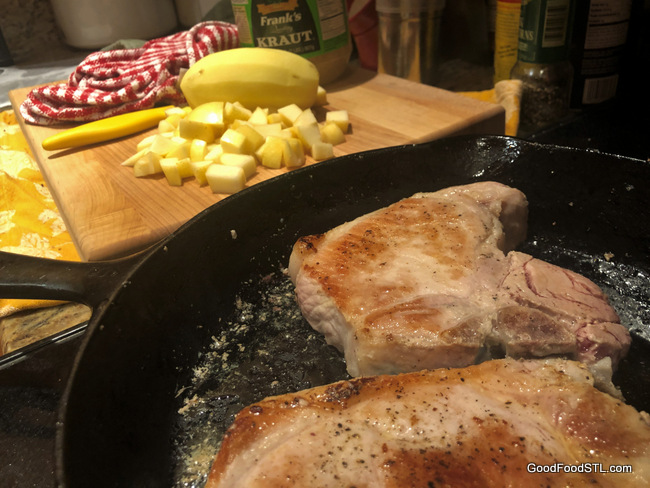 I reduced the no-recipe-recipe to a recipe here.

Give It a Try

Dredge each chop in a flour mixture that includes a sprinkle of salt/pepper, smoked paprika, chili powder, and red pepper flakes. Fry chops in oil and/or bacon grease until crusty.

Remove chops from skillet and set aside. Wipe pan and add butter and lots of sliced onion. Cook until almost brown. Add a few tablespoons of flour and brown a bit before adding a ½ cup, or so, of chicken broth and a bay leaf. Put chops in a baking dish, top with onion mixture. Cover and bake at 350 degrees for 45 minutes.

He goes on to suggest serving the dish with potatoes mashed with warm milk, salt/pepper, melted butter and a teaspoon, or so, of grated lemon rind. I’ve not tried this one, but it sounds zesty.

« Cauliflower: A Head of Its Time
Atop the Kitchen Table »