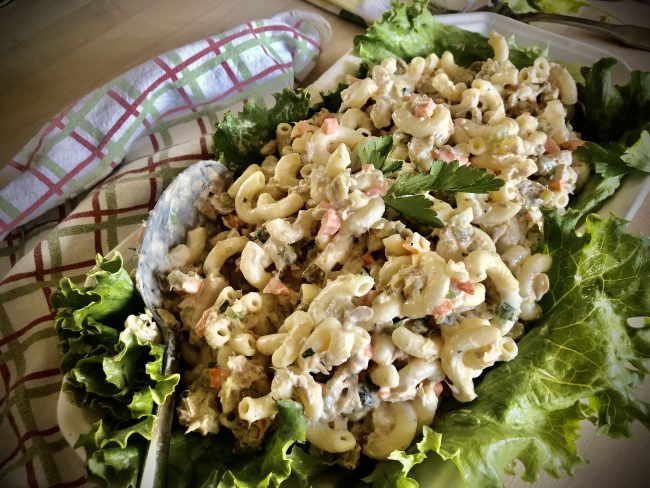 During times such as these, we turn to foods that make us feel good or remember better days. I recently reverted to an old favorite, that I only make intermittently, because it’s so addictive. It’s a “fridge nibbler.” I can’t resist stealing a bite each time I open the refrigerator door.

The salad is listed in this blog recipe file as Tuna-Noodle Salad for a Crowd. But among family and friends, we’ve always referred to it as “John’s Wedding Salad,” because it was served at a wedding we attended nearly 35 years ago. The marriage didn’t last, but the salad has remained a party favorite of those who attended.

At the wedding reception, I had asked the hostess for the recipe. She didn’t have one, she said. Even so, she gave me a guesstimate of what she’d included. I hastily scribbled her recollections on the back of an old grocery list. From what she said, I could tell it was an adaptable recipe, enabling you to include more, or less, of what you preferred. 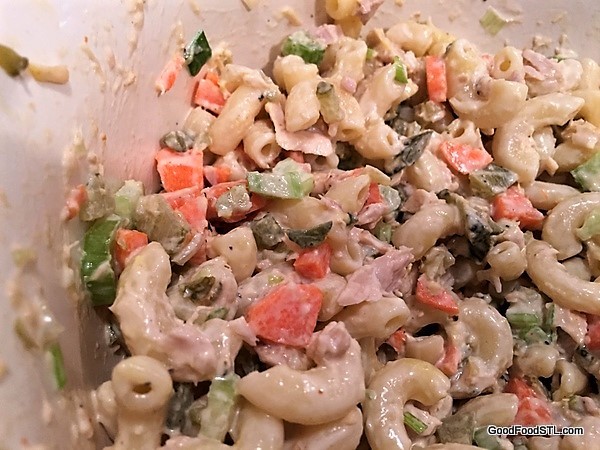 A 1970s Recipe from Clementine’s Deli in Los Angeles

Several years ago while reading the New York Times food section, I  came upon a 1970s recipe for Tuna-Macaroni Salad from Clementine’s, an old Los Angeles deli. It was amazingly similar to John’s Wedding Salad! Their version called for cornichons and I used sweet pickles. They also included cheddar cheese, which I’ve started doing as well.

And they threw in a bit of chowchow, which could certainly do no harm.  (My mother made jars and jars of the pickled relish every year. Sometimes she referred to it as piccadilly, though it always seemed the same regardless of what she called it.)

I made a large bowl of the macaroni salad recently, enough for a few meals, plus refrigerator raids. During the Corona lockdown, I’ve enjoyed the old, noodle standby more than ever. Having “John’s Wedding Salad” on the table somehow made life seem a bit more normal.

Something New: A Twist on Watermelon 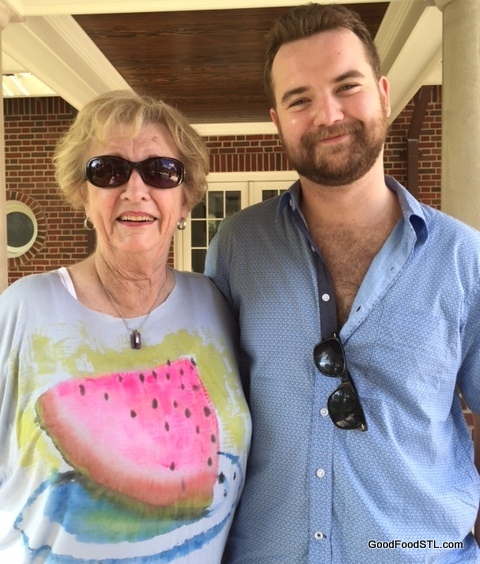 Standing alongside my grandson, Andrew. I’m dressed and ready for the watermelon season.

Along with the old favorites, it’s always fun to try something new. My niece, Katy, who lives on Sanibel Island, said that she had been to cookouts where they served grilled watermelon. That sounded a little weird, but she assured me it was quite tasty and easy to make.

I learned from an online search, that about 50% of those trying grilled watermelon loved it, while the other 50% hated it. Hmm. . . could this be like cilantro, where you have a genetic marker, that causes you to like, or dislike, a food? 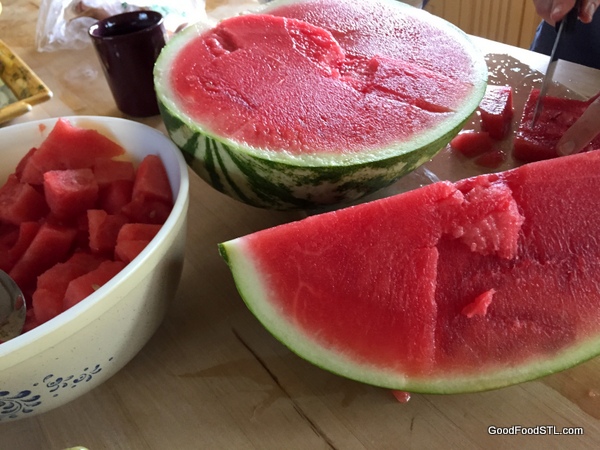 Katy says it’s just a matter of cutting the melon into wedges and rubbing them with a bit of oil. Grilling changes the texture and gives the melon a smoky flavor, that enhances its natural sweetness.

Like Katy, I’m an adventurer when it comes to new food, so this one is on my Must-Try List. The next time I have a melon at the farm, I’m willing to forfeit a few slices to test this novel recipe. I’m looking forward to a “grilling experience.” 🙂 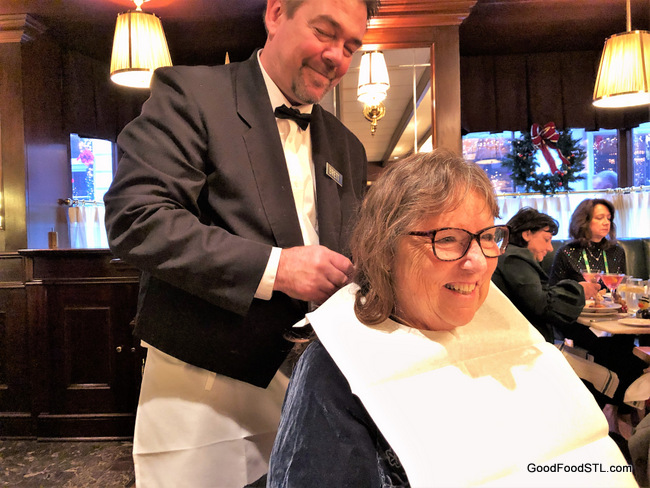 No, this New Orleans server is not preparing to cut Katy’s hair. He’s “bibbing” her for a lobster dinner we shared in New Orleans a few years ago. Ahh . . . those were the good ol’ days, when we could dine indoors and eat fearlessly, elbow to elbow.

« Tie-Dye Sugar Cookies Bring Kids to the Kitchen
Hamburger: At Home or at a Burger Joint? »