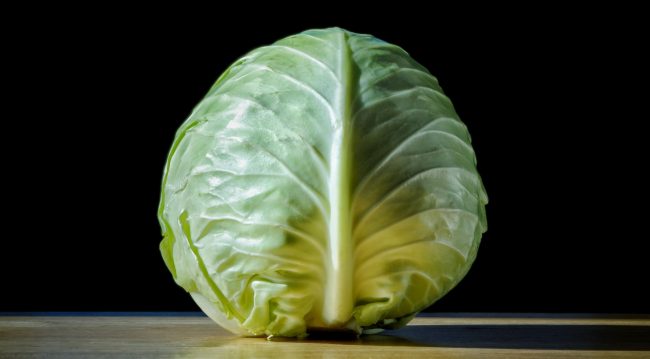 Another Good Reason to Eat Your Veggies

Cabbage, kale, spinach, garlic, Brussels sprouts, oregano and ginger all have antiviral properties. That’s good to know, when we’re trying to ward off CV-19 with all the defenses available.

I put nearly a half head of cabbage in my 9-Vegetable Soup last week. That means I had another half in my refrig. Hmm. . . what to do? Slaw was the first thing that came to mind. But I think of it as picnic food for a hot summer day. We’re not there yet.

My mind drifted back to a dish my mother made frequently during the war: fried cabbage. She cooked it with fat back, that’s less salty than bacon and without nitrates. The flavorful cut comes from the back of a pig and is used in making sausage or lard. Southern cooks, such as my mother, also used it to season green beans, Brussels sprouts, and collards.

Cabbage was not my favorite at the time, but I’ve since come to love both green and red—especially German Red Cabbage. 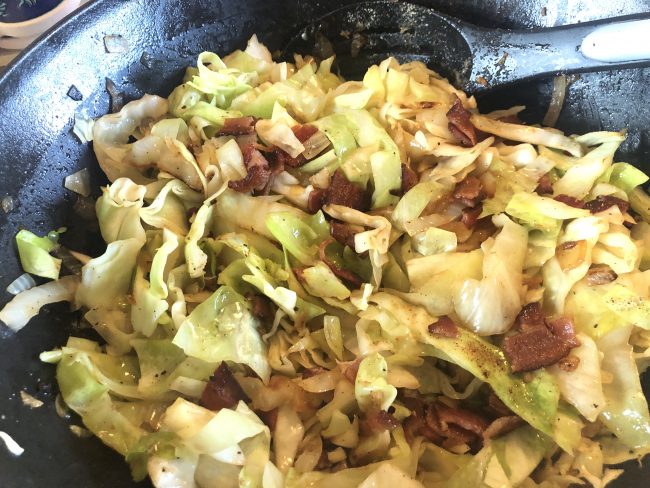 All ingredients for fried cabbage ready to cook in my cast iron wok. The finished cabbage reduces by almost half.

Tampering with the Recipe

This recipe uses green cabbage. It can be made with, or without, bacon and onions—though they certainly give a flavor boost.

Normally, I go with a recipe as written the first time I cook it. Hundreds of reviewers at All Recipes gave this Fried Cabbage a 5-star rating. Even so, worthwhile improvements were suggested. Most agreed that the 1 tablespoon of salt called for was far too much and suggested 1/2 to 1 teaspoon. You can always add more to suit your taste. 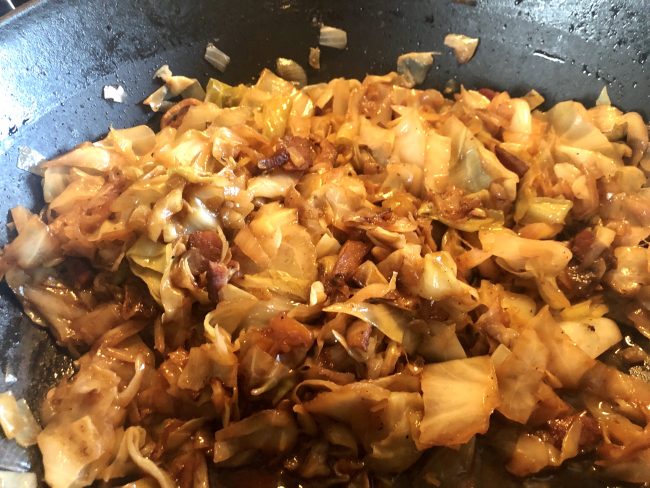 The finished cabbage takes on a caramelized hue.

Spooning off some of the bacon grease, or oil, was strongly favored. Others made the dish into an entrée with the addition of pre-cooked, curly egg noodles, potato chunks, and/or Polish sausage. Red pepper flakes also added an extra kick and shredded carrot gave flecks of color. A smidgen of sugar and apple cider vinegar also upped the tastiness.

As you can see, this old European dish has undergone many revisions in kitchens around the world. Today it’s often served alongside potatoes, corn beef or pork.