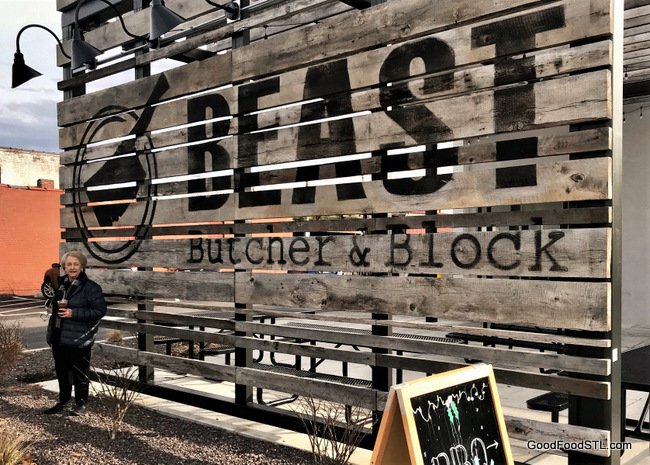 You’ll know you’re there, when you see this “beast” of a sign.

Cruising in The Grove

“What’s the name of the place we’re looking for?” Cyndy asked as we drove east on Manchester.

As a last resort, I pulled up Yelp on my phone. I saw that the trendy barbecue joint in The Grove was named: Beast, Butcher and Block.

“And there it is!” I said, pointing to the billboard-size sign, that looked like it had barely withstood a windstorm.

By this time, Cyndy had driven passed the much-acclaimed smokehouse. I thought I heard her mutter a small expletive as she hit the brakes and made a U-ee in the middle of Manchester.

As we pulled into the parking lot, the colorful wall murals reminded me of some I’d seen in the best BBQ shacks in Memphis. Good sign. 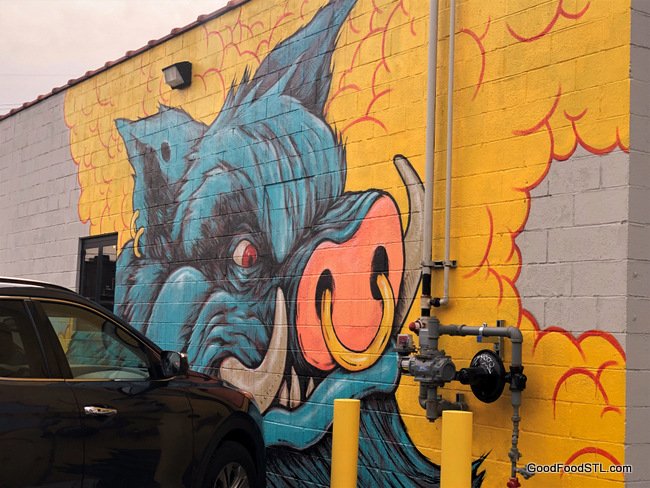 On the side of the building is a pig that looks like an Arkansas Razorback, though I later learned the meat at Beast comes from Duroc pigs. A lot of barbecuing is done in park lots around the South, so it’s a good idea to consider the aesthetics. 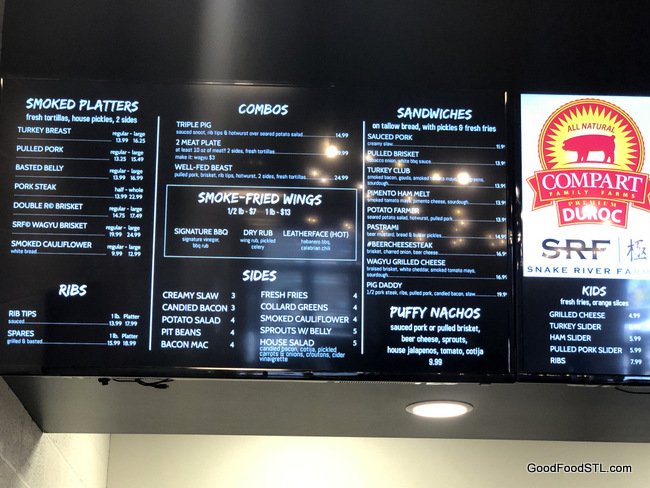 The premier meat for Beast’s award-winning barbecue comes from the beef cattle on Snake River Farms and Double R Ranch and the Duroc hogs of Compart Family Farms in Minnesota.

Once inside, we joined the short, fast moving line formed along the wall, reaching from the front door to the back wall. We took time to eye the plates of nearby customers, noshing on riblets, wagyu brisket, and pulled pork.

As we scanned the overhead menu, the guy behind the counter pleasantly answered our questions: “What comes with the pork plate?” (Two sides). “What’s the favorite item on the menu?” (Riblets). “How long have you been open?” (6 months here; 5 years in Belleville, IL).

Fearing there might be a three question limit, I quickly ordered the Pulled Pork and Cyndy went with the Turkey Club. As we paid up, I handed the guy my “plastic” and he handed me “their plastic” (a cup for getting iced tea from the beverage bar). 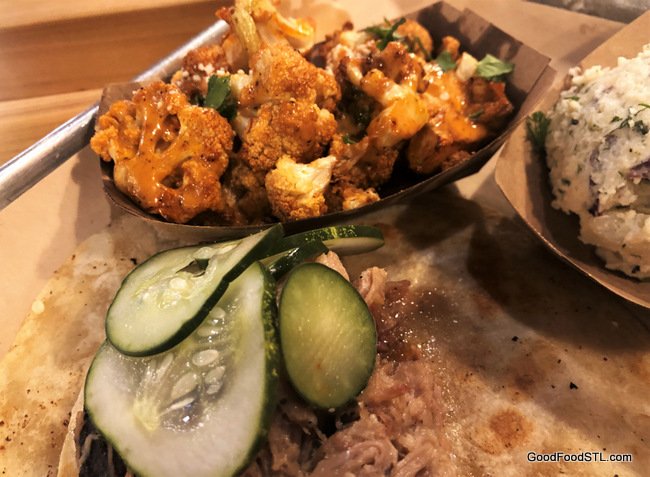 The Pork Plate with two sides, potato salad and cauliflower.

From Pit to Plate

I began to settle in at one of the attractive wooden tables. But before I could get my coat, purse, glasses, iced tea, and phone in place, a bouncy, young server appeared with our food.

Most BBQ places serve on plastic trays. Too often it’s the orange, high-school-cafeteria variety with a paper liner and individual food cartons. Happily, Beast had upscaled with a shiny metal tray of more manageable size.

Even so, you won’t find any distracting sprigs of parsley or lettuce garnishing the platter. Just pickle slices. It’s a barbecue joint, for heaven’s sake, not Tony’s.

As Cyndy and I tasted the meats and side dishes, we sat speechless, our heads wagging in approval. This was good eatin’! And the cauliflower, Brussels sprouts, potato salad, and mac and cheese brought it all together in a grand panoply of lusciousness.

Turkey Club with Brussels Sprouts, and Cheese and Mac

After lunch, we headed into the Butchery, that was cleverly tucked away in a front corner with its own sidewalk entrance. Another chatty guy behind the counter versed us on the meats, condiments, and beers they carry.

Cyndy and I were attracted to a bottle of fine vinegar. But I demurred. At the moment, I’m over supplied with fancy vinegars, enough to last me well into the new decade.

But I did succumb to the house-made pimento cheese spread. I can’t resist the Southern delicacy. The butcher took time to explain that the ingredients had the extra kick of jalapenos. I was sold. 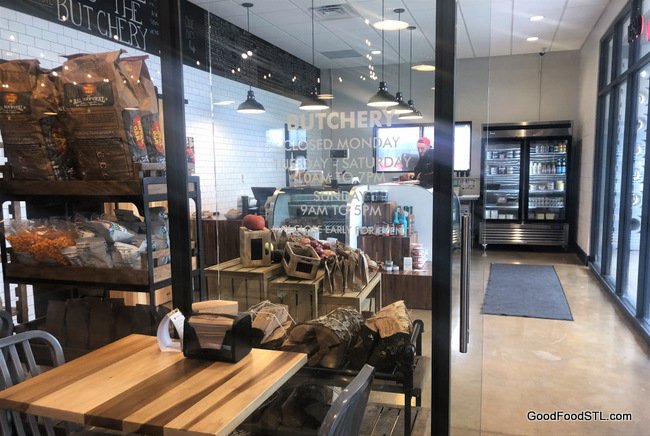 The Butchery portion of the restaurant 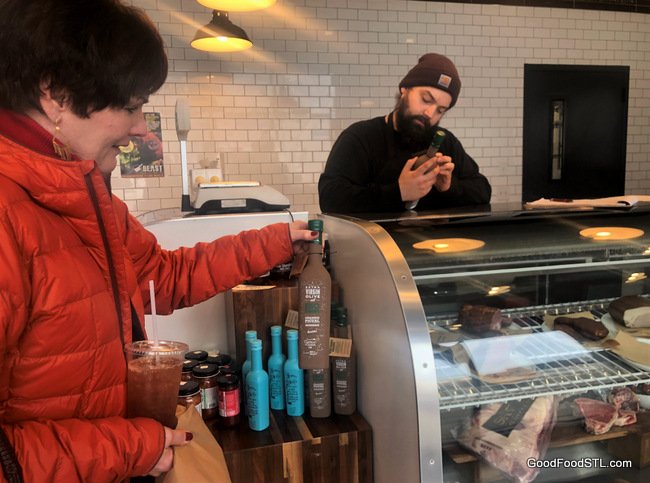 Cyndy checks out a gourmet vinegar 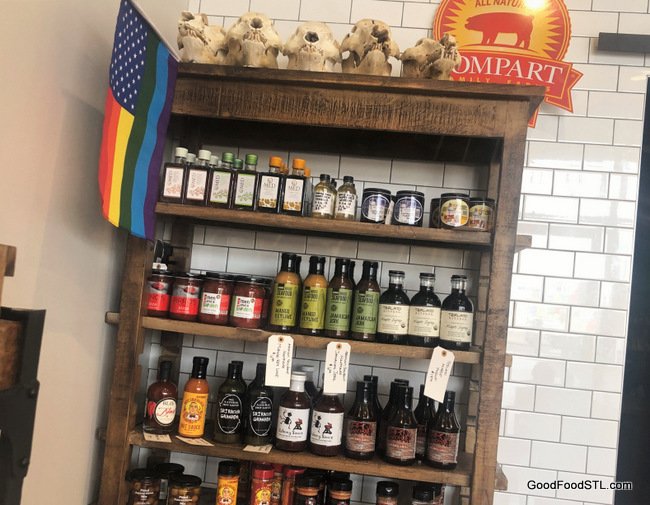 A wall of condiments and sauces for your grilling pleasure.

Sunday brunch is served from a glass-partitioned side area called The Skullery. (I love the name! You’re most likely to see the term in an old, English novel. It means “small room off the kitchen.” Hmm. . . I’m thinking I need one of those.)

The Sunday Brunch includes such favorites as brisket and gravy, Duroc bacon, cheese grits, smoky cauliflower, Brussels sprouts, salads, French toast and much more. (Cost: $29 for all you can eat. Reservation are desirable.)

But there’s more going on in The Scullery. Tasting-menu dinners, cooking classes, and research also take place around the open wood-fire. Reservation are strongly recommended for this “fire to table” experience. (No mention of whether there’s a designated Scullery Maid, as is the case in many British novels.)

We left with the cheese spread and some iced tea for the road. Cyndy and I are both year-round iced tea drinkers. Beverages brought to the table before a meal often give you the first impression of a place. In the best Southern tradition, Beast offers sweet tea and, as a concession to Midwestern tastes, an unsweetened alternative.

From snout to tail, Beast, Butcher and Block gets a hearty thumbs up.