It’s time to roll over a new decade. Time to join with Ella Fitzgerald in asking the “jackpot question in advance: What are you eating New Years, New Years Eve?”

New Year’s traditions abound, depending on your heritage and geography. Many involve food. But my Scots-Irish grandmother put less emphasis on the food eaten, then who was the first to come to the door on New Year’s Day: a tall, dark-haired man brought luck to the household, but a light-haired woman did not.

She said if a guest brought a lump of coal, it meant the family would always be warm; a gift of food meant the household would not go hungry. She didn’t recall being either cold or hungry for any length of time, so I guess it must have worked.

Greeting the New Year in the Ozarks

Raising my family in south Missouri meant learning other ways of kicking out the old year and ushering in the new. My neighbor and good friend, Sonia, from Arkansas insisted we eat black-eyed peas each New Year’s Eve.

The kids resisted eating the tasteless, gray legume, despite the warnings. But being young, they were willing to take the risk of countering tradition. The rest of us dutifully ate our peas. (Which I have since come to enjoy.)

Why do Southerners do this, you ask? Legend says the humble legume saved Vicksburg from starvation, when they were under attack during the Civil War. So if you feel like you might “come under attack” this next year, get a few black-eyed peas under you belt just to be on the safe side. 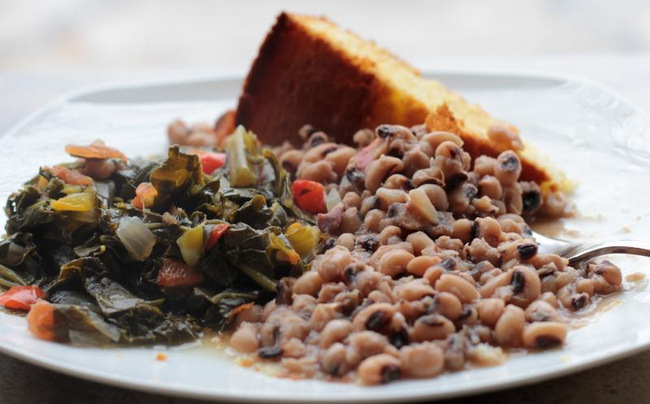 Black-eyed peas and collard greens with cornbread. Collard greens symbolized folding money. The more you eat the greater your financial benefit. Combine them into a dish called Hoppin’ John and get a double whammy of good fortune.

Who Has the Most Unusual Traditions?

According to a recent item on line, it’s the Colombians who observe some of the strangest New Year’s traditions. So my son-in-law, JC, being Colombian, has added a new element of celebration to our holiday.

JC swears by this one: eat 12 grapes at midnight, one for each stroke of the clock. The custom originated in Spain more than a hundred years ago to alleviate a grape surplus and the custom spread to other Spanish-speaking countries.

Beware: If one of the 12 grapes is sour, that means the corresponding month will also be unpleasant.

The celebrating Colombians then grab an empty suitcase, or bag, and walk around outside to promote good luck and travel in the year to come. This is best done after a few drinks.

Even more amusing, is wearing yellow underwear for the holiday celebration. (I’ve never checked to see if JC is observant in this regard.) Maybe a yellow tie would serve as well, but who am I to try to alter a sacred South American custom

Though I don’t follow the Colombian custom of cleaning house on December 31, it does makes sense. 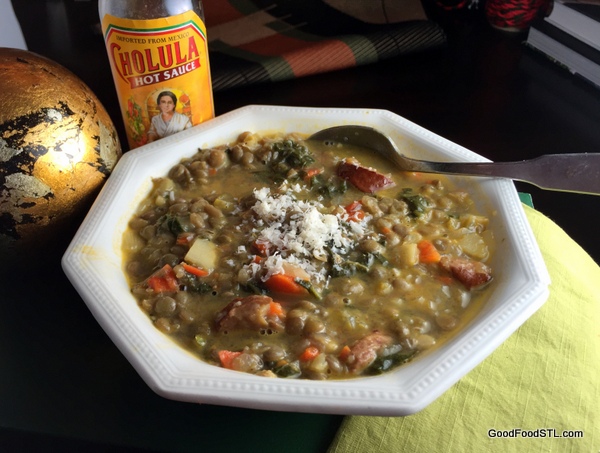 Colombians stuff their pockets with lentils to ensure a bountiful year. I improved on this one. I made some lentil soup. Hmm. . . I wonder, does that count?

I’ve not seen JC burn a dressed effigy stuffed with firecrackers that ignite to symbolize getting rid of anything bad in the old year. No carry over of burdens or negativity from the last year. I like that.

Colombians favor spending the New Year’s Eve with family and friends surrounded by food, drink and salsa dancing. I’ve already gotten used to this one.