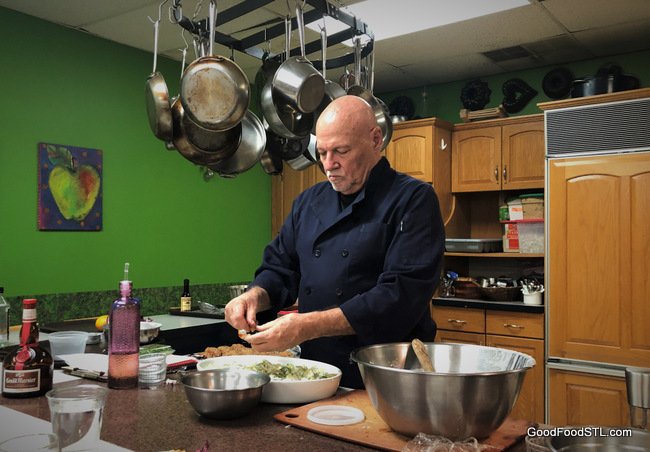 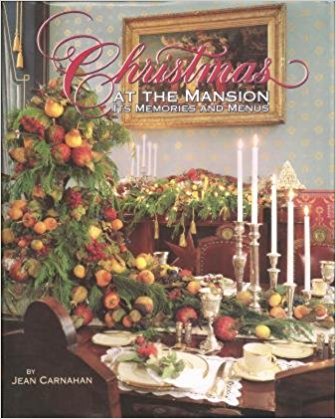 This week I got to enjoy another kitchen demo with Chef Mickey Kitterman at Kitchen Conservatory. It was on a topic near and dear to my heart. He made recipes from my cookbook: Christmas at the Mansion, Its Memories and Menus. It was heartwarming to relive a meal, that I served at the Missouri Governor’s Mansion in the 90s.

A Lively Evening of Learning and Eating

Mickey fed, taught, and entertained about a dozen people sitting around the U-shaped counter of the open kitchen. While Mickey prepared the recipes, I responded to questions about the cookbook and meals served at the Mansion during the 8 years I lived there. (I threw in a few ghost stories as well.)

In a second kitchen, Margi Kahn taught a class entitled Breads from France. Robin signed up for the hands on bread class, where they made classic baguettes and orange-glazed almond fougasse (a lattice-shaped bread associated with Provence).

Classes for One and All

There are classes for every interest and cooking skill. I’ve taken several of the courses and always enjoyed the food, instructors, and camaraderie.  If you have a foodie on your Christmas list, think about giving one of the classes as a gift. I’m looking at the catalog now for a kid-adult class for my granddaughters and me. Great fun! And no kitchen clean up!

Register for classes in person, by phone or on the Kitchen Conservatory website. But first, take a look at what we ate on Thursday night. 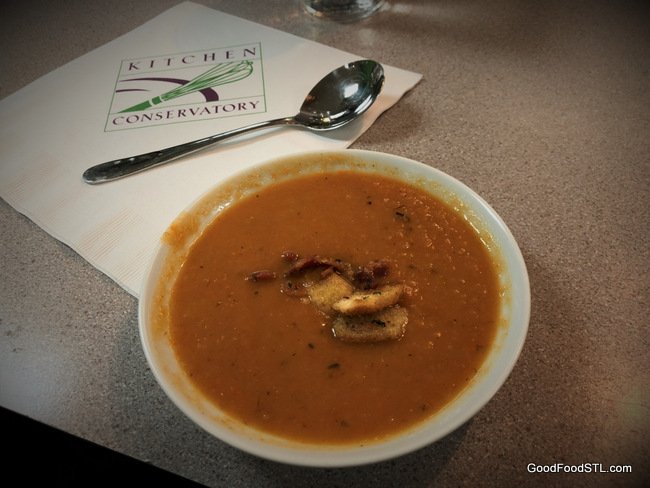 Roasted Root Vegetable Soup is hearty and healthy. A great beginning to a fall or winter meal. 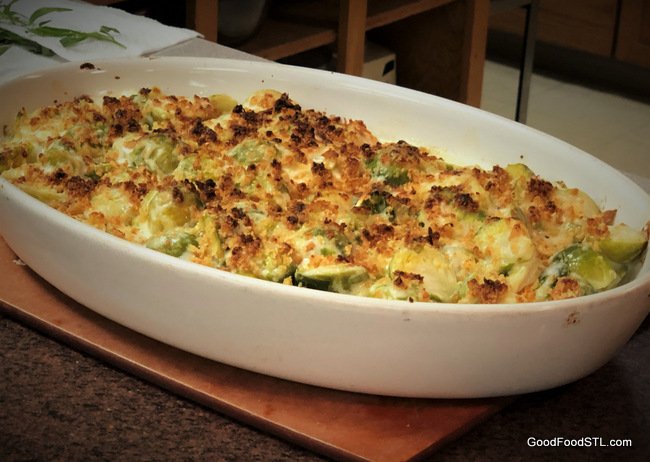 This dish of Brussels Sprouts au Gratin is blanketed in a Gruyere sauce and quite heavenly! The sprouts and sauce can be made ahead, combined, and the topping browned under the broiler. 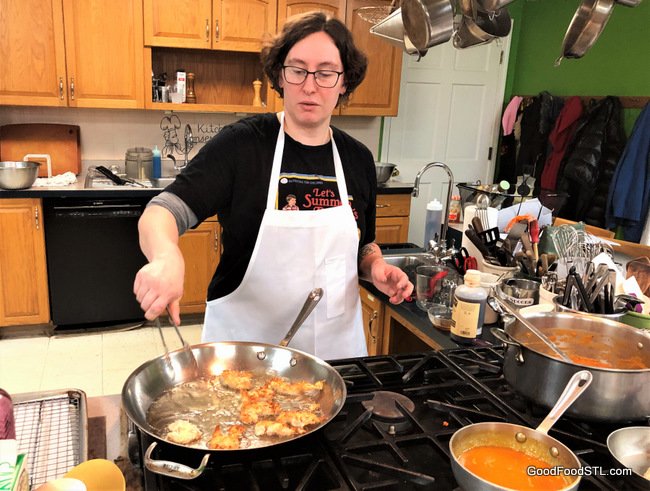 After being rolled in flour and coconut, the shrimp is sauteed briefly. This makes for an extremely tasty and quick salad topping or appetizer. Slicing the shrimp in half horizontally make them cook faster and go twice as far. 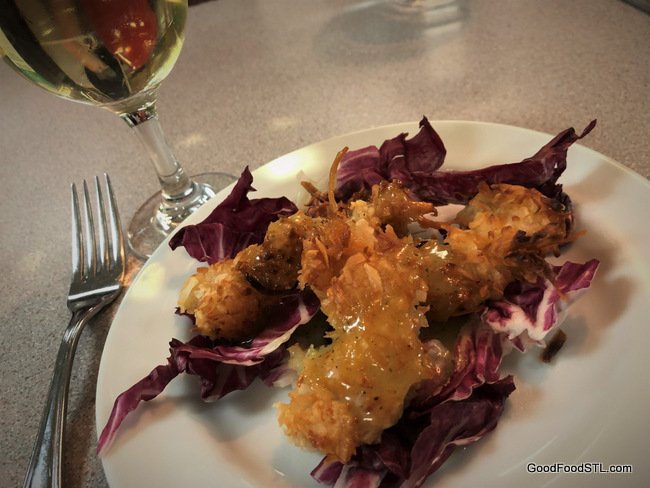 The menu called for Field Greens with Coconut Shrimp and my favorite Basil Vinaigrette. But when the greens that Mickey planned on using were not up to par, he calmly switched off to radicchio. That was a lesson in itself on how to cope with unforeseen things that come up when preparing a meal. 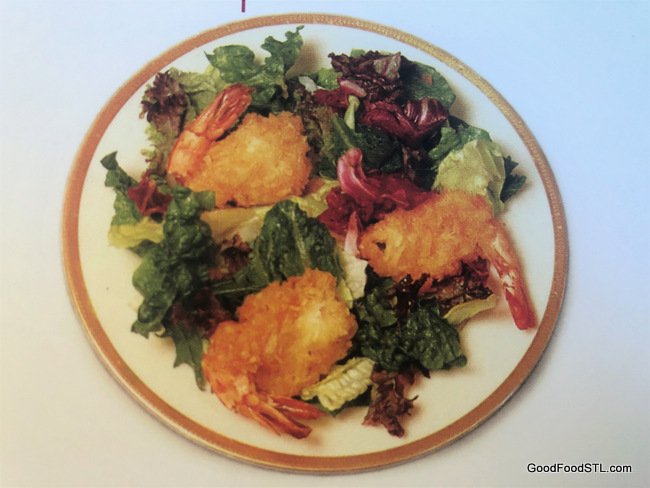 Here’s how the Coconut Shrimp would have looked atop a bed of mixed green. (photo from cookbook). 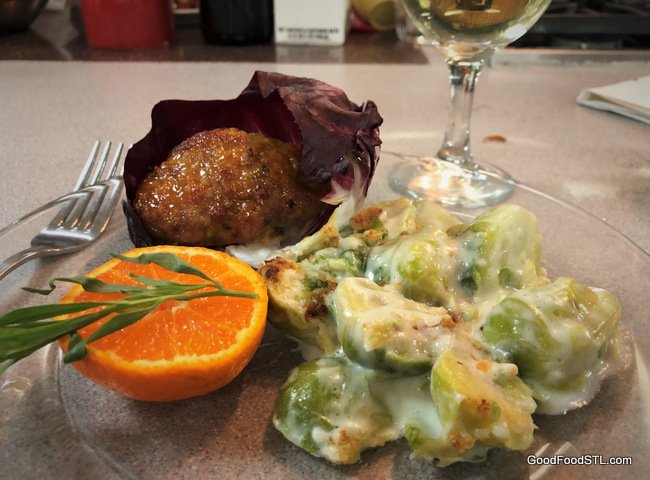 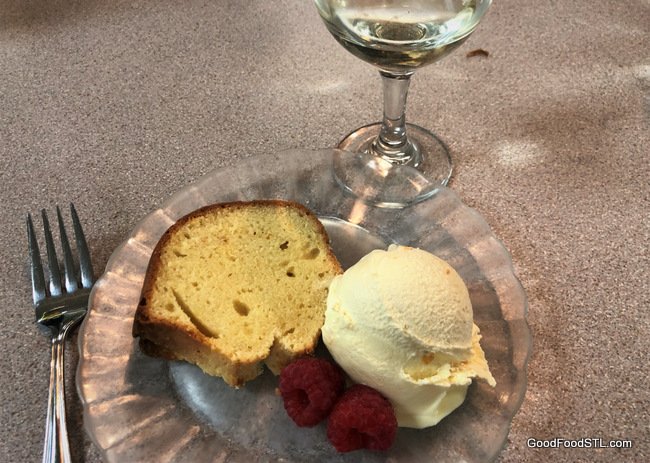 The Apricot Brandy Pound Cake from the Mansion Cookbook was the inspiration for this version using Grand Marnier. It’s served along side Mickey’s smooth-as-silk, homemade ice cream.