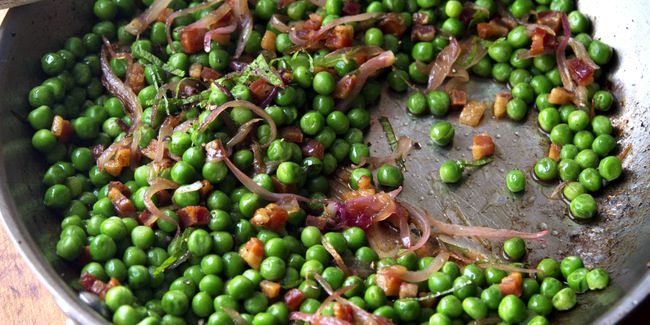 A Knife Load of Peas

I’ve been food blogging for nearly four years, but have never written about green peas. This was an oversight, for I have nothing against the tiny green orbs, that roll happily around my dinner plate. My grandfather ate his with a knife, which most 19th century Irishman were skilled enough to do.

Unfortunately, the likes of Emily Post frowned upon such table shenanigans, so I never learned the art form. But the practice did lead the nutty poet Ogden Nash to write: “I eat my peas with honey. I’ve done it all my life. It makes the peas taste funny. But it keeps them on my knife.” 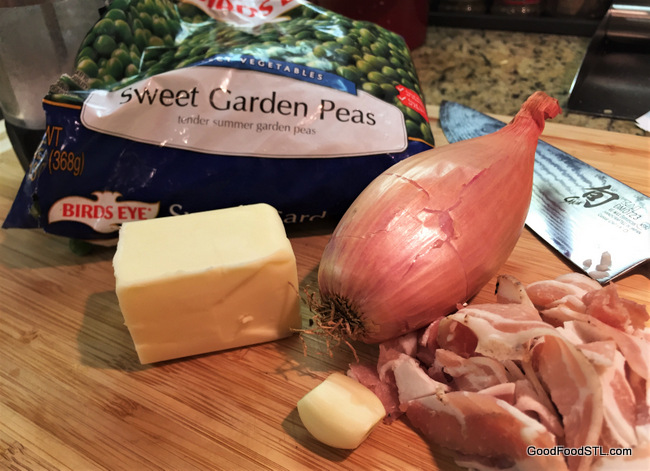 A few simple ingredients, but lots of flavor

The Rodney Dangerfield of Vegetables

Like comedian Rodney Dangerfield, green peas get no respect. The inconsequential vegetable is called upon only when you need one more side dish or a bit of color in a casserole. And don’t get me started on the canned variety, that’s tossed on board the blue plate special in a cheap restaurant.

Ina Garten and Winston Churchill to the Rescue

After reading Ina Garten’s recipe for Peas and Pancetta, I’ve gained a greater respect for the vegetable. When spiked with flavor, peas can hold their own at any table. Eaten with a spoon, fork or knife (just don’t lick the blade 🙂 ) peas yield healthy amounts of vitamins A, B, K and several minerals. They’re good for your eyes and heart and low in calories.

Winston Churchill counted new peas among the “essentials of life” along with cold champagne and old brandy. That’s pretty good company. So as my mother would say, “Eat your peas!” Which I did as a child by first smothering them in the mashed potatoes. I’ve seen many variations on Peas and Pancetta, which shows how flexible this simple recipe is. Some call for butter rather than olive oil, use scallions rather than shallots, sub prosciutto or bacon for pancetta, or add garlic. It all works. One highly regarded food blogger adamantly favored overcooking the peas, feeling it enhanced the flavor. Hmm. . . not sure about that one. But most agreed that using small frozen peas, such as Birds Eye Sweet Garden, was a good alternative to fresh peas, that have such a limited season.

Kitchen Quote of the Day: Relax, you can only balance so many peas on your knife at one time.

Heat olive oil in a medium (10-inch) sauté pan, add pancetta and shallot, and cook over medium heat for 5 to 7 minutes, stirring occasionally, until pancetta is browned and shallot is tender. Add frozen peas, 1 teaspoon salt, and ¼ teaspoon pepper and cook over medium-low heat 4 to 5 minutes. Stir in mint, taste for seasonings, and serve hot. (From Make It Ahead, by Ina Garten)

« When Easter Came with a New Bonnet
Slaw Make a Comeback »